Sometimes it takes someone who’s not an expert to see what’s right in front of them. Anthropologist and author, David Graeber, writes exclusively for Renegade Inc about his discovery of a glaring error in household debt calculations which have potentially frightening implications for the stability of the entire economic system.

Read about his discovery below then tune in to watch the latest episode where he discusses his findings with co-founder and presenter, Ross Ashcroft and former chairman of the now abolished Financial Services Authority, Lord Turner.

Last month I noticed what appears to be a glaring error in the UK’s Office of Budget Responsibilities’ calculations of household debt levels—one with potentially frightening implications for the stability of the financial system as a whole.

To put it simply: the only previous time in British history that the household sector as a whole had been in deficit, spending more than it was taking in, and filling in the gap with borrowed money, had been immediately before the financial crash of 2008. Now the same thing was happening again. Even the numbers that the OBR was willing to admit showed the situation to be just as bad, or even worse, than it was before the crash. But in fact the OBR’s numbers quite literally didn’t add up. There was every reason to believe that matters were even worse than anyone was willing to admit to.

A bit of context. Many people—myself included—had warned that austerity policies, if left in place, would cause it to happen again. It hardly took any remarkable acumen to see why this was the case. Suppressing wages, cutting benefits, and increasing taxes on the poor in the name of balancing the budget, was going to put households increasingly in the red; combine that with the fact that the British economy was propped up on a housing bubble, which drove up rents, the results were entirely predictable.

More and more households would be forced on the tender mercies of one or another form of legalised loan shark: whether credit cards, credit plans, or payday loan companies. Basically, the government’s determination to balance its budget necessarily meant ordinary households would be increasingly unable to be able to balance their own. What’s more, there was every reason to believe that, rather than being disturbed by this outcome, Tory governments actually welcomed it. This may seem conspiratorial—am I really saying the government welcomed mass indebtedness?—but one need only look at the education reforms of 2010 to witness an example of an entirely self-conscious decision on the part of the government to do exactly that.

When the Coalition decided to introduce a regime of student loans to pay for tuition increases, they knew perfectly well that there were any number of other viable ways to pay for the increases: for instance, a fairly minor tweak in graduates’ later tax rates. Instead they chose to leave an entire generation of graduates starting their young lives being told their education had been handed to them by the very financial system that had very nearly crashed the global economic system only two years before, and they were going to have to spend at least half their working lives trying to pay them back.

Austerity does the same thing, only, slightly less directly. As a disciplinary mechanism, it’s spectacularly effective. It’s not as if those making policy decisions did not know this—any more than critics like myself who tried to vainly point it out.

For my own part, I had reason to know as much as anyone. I lived much of my adult life under the burden of monthly student debt payments, and am keenly aware how much they might as well have been designed to ensure that only the children of the rich will have any possibility of a rebellious, bohemian lifestyle, or, for that matter, a career in politics, activism, or the arts. I’d also written a history that documented just how such calculated regimes of mass indebtedness had been deployed, over the centuries, to convince the poor—that is, vast majority of people who ever lived—that they were irresponsible wastrels who owed their existence to the rich.

The thing that always struck me is how much the morality of debt—that anyone in debt has only themselves to blame, that deadbeats are contemptible—stubbornly refuses to die. Even now, when the situation is largely engineered by government policy, the first impulse of pundits and other popular moralists is invariably to assume the real problem must, somehow, be a bunch of lazy freeloaders, living beyond their means.

As a result, by the standards of public discourse that exist today—that is, the sort of things it’s considered acceptable coming from the mouth of a politician or TV commentator or government economist—it’s not really legitimate to worry about rising levels of household debt simply because it causes misery or deprivation, if it means millions of actual flesh and blood human beings will be living lives of fear, anxiety, and constant humiliation.

It’s only really legitimate to worry about rising levels of household debt insofar as it might be likely to cause another financial crisis.

(Such a crisis, after all, might well affect the lives of the rich and upper reaches of the professional and managerial classes, that is, the kind of lives that policy-makers feel they have to take account of.) And even then, it must be posed as a moral problem caused by irresponsible self-indulgence—as one Daily Mail headline recently put it: “Your neighbour’s shiny new SUV is about to crash the economy!”

Yet the two impulses are clearly in tension. To look at debt in macro-economic terms does make it easier to see it as a structural problem, as the result of self-conscious policy decisions. As a result, everyone seems to want to minimise the problem.

Here are the numbers that they published in 2017, which a friend of mine who works in the City translated into handy tabular form: 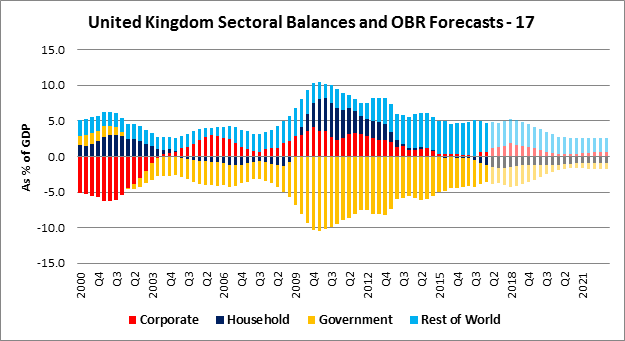 The attentive reader will note that the image is symmetrical. Up to around 2014, at least, the top and bottom half exactly mirror one another. This is exactly as things should be: it’s an “accounting identity”, as in a ledger sheet, debits and credits have to add up. The remarkable thing is that after 2014, they don’t, and in the projected future, the top and bottom are actually quite different.

When I first saw this diagram I was startled and confused. Was I missing something? Was there something about the math I didn’t understand? I passed the image on to two different economists and asked just that: isn’t there something wrong with the numbers here?

Both instantly got back to me, rather surprised they had not noticed it themselves, and confirmed that yes, indeed, there was something very funny going on here. One even wrote to the OBR himself, asking why the two sides didn’t match up, only to be informed it was a standard “residual error” that always occurs at first but is duly patched up later. (This clearly isn’t true: no previous OBR report contains such an imbalance; when this was pointed out to them they simply dodged the question). Here’s the link to the latest report.

This is what led to my piece in the New Statesman, calling for a public inquiry. I also asked my friend who made up the original diagram to adjust it to what it might look like corrected. This has to involve a certain amount of guess-work as we don’t actually know which part of the numbers are inaccurate. He provided me two possibilities; both extremely sobering. Either the additional deficit might be divided up between public and private debt, the results would look like this: 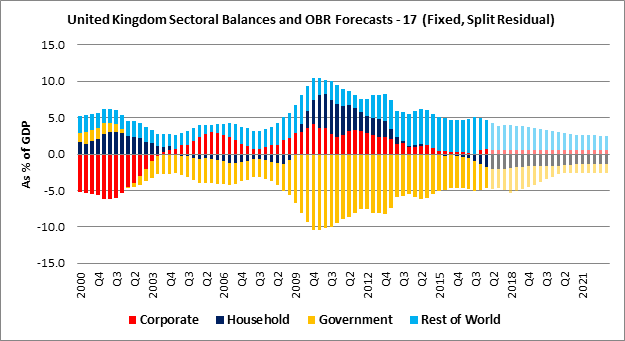 This is already far worse than the year or two leading up to the crash of 2008, but if we assume that the difference was entirely made up of household debt, the results are downright startling. It’s not clear we’ve ever seen anything like this:

Why, precisely, is this not setting off alarm bells?

Some people hate to say “I told you so.” Not me. I have no problem with this myself. So allow me to remind the reader that back in 2015, right around the time the original, bogus OBR predictions came out, I wrote an essay in the Guardian predicting that austerity and budget-balancing would create a disastrous crisis in private debt. Now it’s so clearly, unmistakably, happening that even the OBR cannot entirely deny it, though they seem to be inclined to minimise it as much as possible—so much so, in fact, that they appear to be unable to notice or acknowledge the implications of fairly obvious mathematical errors, even when they’re pointed out to them.

This is why I think a Private Inquiry is so important. We need to clarify what’s really happening here, and the constituted authorities clearly are not interested in doing so. Will there be another 2008-style crash? Such things are by definition impossible to predict. The near global financial melt-down that occurred at the time was partly the result of massive private debt—in this case mostly housing debt—partly, too, as we all learned at the time, the result of bizarre and exotic forms of securitisation whereby financial institutions would wrap up bad mortgages with bets on how long it would take the holders to default on said mortgages, secure in the knowledge that governments would not allow them to collapse no matter what happened; with the result that when the securities were discovered to be scams, banks had no way to know what was real money and what was junk, who had what, who could be trusted and who couldn’t.

Is something like this going to happen again? Exactly how much of this private debt has been similarly securitised. What would happen if housing prices begin to collapse? If widespread public misery in the present is not enough to inspire public servants to look into the problem, perhaps at the very least, they might be stirred to action by the prospect that the sacrifices they demanded in the name of austerity—sacrifices which, they claimed, were meant to guarantee a secure and prosperous future for their grandparents—might end up doing precisely the opposite.

David Graeber is an author and professor of anthropology at the London School of Economics.He wrote the best-selling book Debt: The First 5000 Years.