On 1st March, Vladimir Putin gave his annual address to the Federal Assembly in Moscow.

Unsurprisingly, one segment in particular drew the attention of the western press – the section on defence. Putin described a number of highly advanced weapons systems scheduled to come online over the next few months and years. He explained the necessity for the development of these systems, particularly since George W. Bush’s withdrawal from the ABM treaty in 2002, and went on to describe the parameters within which they would be used. In the passage below, you will see that he alludes to recent statements made by the United States, in which they have asserted their prerogative to make a first nuclear strike:

“We are greatly concerned by certain provisions of the revised nuclear posture review, which expand the opportunities for reducing and reduce the threshold for the use of nuclear arms. Behind closed doors, one may say anything to calm down anyone, but we read what is written. And what is written is that this strategy can be put into action in response to conventional arms attacks and even to a cyber-threat.

I should note that our military doctrine says Russia reserves the right to use nuclear weapons solely in response to a nuclear attack, or an attack with other weapons of mass destruction against the country or its allies, or an act of aggression against us with the use of conventional weapons that threaten the very existence of the state. This all is very clear and specific.

As such, I see it is my duty to announce the following. Any use of nuclear weapons against Russia or its allies, weapons of short, medium or any range at all, will be considered as a nuclear attack on this country. Retaliation will be immediate, with all the attendant consequences.

There should be no doubt about this whatsoever. There is no need to create more threats to the world. Instead, let us sit down at the negotiating table and devise together a new and relevant system of international security and sustainable development for human civilisation. We have been saying this all along. All these proposals are still valid. Russia is ready for this”

Anyone who has followed international politics since the sixties will hear echoes of ‘mutually assured destruction (MAD)’ in this passage. I.E. “No-one can win, we will all lose, so let’s calm it down’…with the addition of what was missing for much of the cold war…”so let’s talk”.

This is not how the speech was reported in western media. Here are some of the headlines:

Of course, it is easy to understand how those outlets could draw such inferences from the speech – anyone with half a brain and a drum to bang could take any segment and extract a case for ‘Russian aggression’. However, read the whole speech, attempt to put yourself in Russia’s shoes for even a moment…and what you will notice about western coverage is an almost total lack of objectivity, intelligent analysis, or understanding. In short, our media do not attempt to see the world through the eyes of Vladimir Putin – they project their own view, which amounts to this:

He’s bad, he’s evil, and that’s the end of it…now where is the evidence for that…oh look there it is…

Take an account of almost anything that Putin says, or Russia does, and the story in our media will be a celebration of the dark arts of generalisation, deletion and distortion…and very little else. 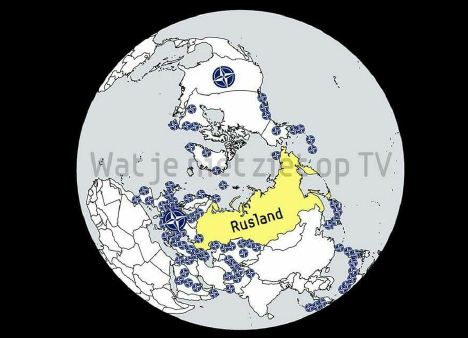 “They don’t even deny it. You know what they told us last time? They said: ‘Yes, we do interfere, but we’re entitled to do it, because we’re spreading democracy, and you’re not – so you can’t do it’” 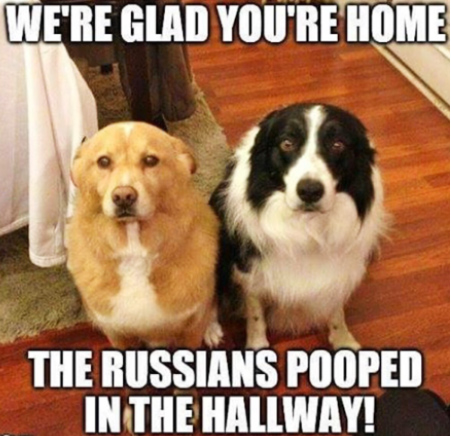 Daft as this may be, it’s not a million miles away from Donna Brazile’s explanation of how and why presidential campaign debate questions found their way into Hillary’s briefing pack.

We are all supposed to lap up this garbage with no critical thinking of our own. Listen to any State Department Press Briefing on Russia and you’ll think you’ve been transported onto the set of a British soap opera. It’s essentially ‘He’s the evil slag who killed my cat’ translated into diplomacy-speak.

If you have any doubt about the power and persistence of this mass delusion, start to notice how many times you hear or read this:

“I am not a fan of Putin but…” or “Putin is undoubtedly evil but…” and other derivatives of the same language pattern. This is a form of ‘virtue signalling’, which is more accurately described as ‘virtue protection’. The point being that the speaker has to tell you that Putin is bad even when presenting a counter argument to the established narrative, in order to protect their own virtue. This is a clear sign of how insidious the propaganda has become – many are not consciously aware they are engaging in it, and those that are, feel it is a necessity.

So, what is happening here?

I am not a journalist, a politician, a member of a think-tank, a political analyst, or any other type of ‘expert’, real or imagined – I am a retired UK business-person with a lot of experience of the world. My primary qualification is that I am a citizen, and require no further qualification in order to challenge power.

Having read a virtual ton of ‘analysis’ by people who are supposed to be experts, I regard this as a blessing – since most of them clearly don’t think much at all. The analysis, such as it is, is more often than not blinkered, partisan nonsense, riddled with pre-supposition and sometimes blatant lies. There is a name for that stuff – propaganda. Whether it is done consciously, which it is by the sociopaths at the top of organisations like the CIA, or whether it is done unconsciously by lower level shrubs in politics and the media, the propaganda is developed something like this:

This is not peculiar to politicians. It’s essentially what ‘economists’ do to justify the idiocy of Central Banking in general and QE in particular. It’s what the US and the UK have been doing for decades. It’s poison…very clever poison…very effective poison…but poison nonetheless.  The good news is that when you become aware of the pattern being played out repeatedly…it becomes transparent:

Over the past thirty years Washington and London have been running a regime change strategy we may call ‘The Evil Man’. They have used it to great effect on Iraq (Saddam Hussein) and on Libya (Muammar Gaddafi). It is currently being used on North Korea (Kim Jong-Un) and on Syria (Bashar al-Assad).  Most disturbingly of all, it is being used to demonise Vladimir Putin. This is incredibly dangerous. Not because he knows what’s happening – they all do by the way – but because he has the wherewithal to push back in equal measure. Given how stupid, arrogant and greedy the Military Industrial Complex has become, they could push this situation to a point of escalation that cannot be stopped. Read Putin’s speech – it’s as clear as day that he knows what’s happening and what it could lead to. And note this – he’s the one saying ‘let’s stop this before it goes too far’

In terms of the ‘The Evil Man’ strategy, here is a short clip of Swiss historian Danielle Ganser, explaining it beautifully:

As I write this we are in the midst of the ‘Skripal Poisoning’ enquiry, or more accurately, lack of enquiry. Personally, I don’t buy Theresa May’s certainty – not for one moment. You could drive a 1970’s Buick through the ‘evidence’ being put forward, which is really nothing more than another exercise in ‘Putin did it’. The best summation of the state of play, that I have seen thus far, comes from Craig Murray, historian and former British Ambassador to Uzbekistan:

This ‘story’ will evolve – of course it will. No-one can be sure of what will come up, but since all we really have at this stage are ‘opinions’, here’s mine, albeit restricted to 280 characters and a couple of pictures: 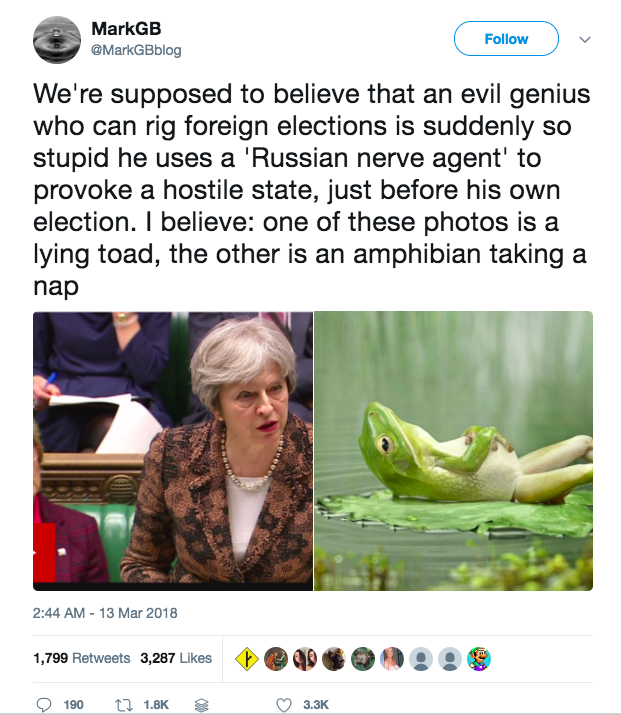 What I do know is this: a war-mongering mind-set has taken hold in governments, in our security services, and increasingly in the military…a mind-set that the media is drip-feeding into the population.  On that score, I am personally committed to exposing this mind-set for what it is: whether it is print media hacks with their whitewashing of the US funding of al-Qaeda and the White helmet ‘psyop’; or whether it is the televisual media that parrots the governmental line on anything Putin says, does, or doesn’t do…I will not sit quietly by whilst these sociopaths and morons take us to war…again.

To my fellow citizens I say this: Make up your own mind – don’t blindly believe me or anyone else; and for God’s sake don’t let the government and the media make up your mind for you.

To politicians and the media, I say this: I haven’t forgotten Iraq even if you have. If you think for one moment that I’m going follow you down the warpath on the basis of zero evidence or blatant ‘bullshit’ – it’s never going to happen. Either tell the truth, or get out.

24 thoughts on “The demonisation of Vladimir Putin”