If we are going to count housing in GDP, shouldn’t we count it just once?

What makes housing so different?

The argument to include both housing construction (as a new capital investment good) and housing occupancy (as a consumption good) arises from a conceptual trick at the heart of national accounting. That trick is to separate out two types of ‘final’ goods when adding up the ‘value-added’ in the economy, which is what GDP does.

One good is a consumption good. These are goods (and services) that households consume, like clothes, food, entertainment, and so forth. All the value added at intermediate stages in the production chain of these goods can be captured by looking only at the final retail value of the goods. That value represents the total value-added across the economy to produce that good.

The other type of good is an investment good. This is a good that lasts a long time and contributes to future production. A new rail line, for example, is classified a new investment good, and the value of its production is counted in GDP, even though households don’t get any value from it until it is used to run trains.

Once the rail line is being used to run trains, the value of those travel services is also counted in GDP as a consumption good, which will include within it the value contribution of the rail line itself. Thus there is a type of double-counting when it comes to investment goods — you count them when they are made, and you count them again when they are used to make consumption goods.

This is intentional. The production of investment goods is a large share of GDP — between 20 and 40% in most countries. By ignoring this production, which is also the more volatile part of production over the business cycle, GDP loses much of its value as a measure of how economically active a country is.

The construction of new homes is, therefore, an investment good, which gets counted in GDP. But then the occupancy of these same homes gets counted gain as a consumption ‘home rental’ good each period after. This applies to the 70% of households (in Australia at least) who own their own home, not just the renters. Although they don’t pay themselves rent to occupy their home, GDP is calculated as if they do by ‘imputing’ the rent that homeowners would have to pay themselves if they instead rented their home.

What effect does this have on GDP?

Obviously, including an imputed amount that a home-owning household would pay themselves to rent their own home adds to the level of GDP. On average, this imputed value is 8% of GDP [1].

There are two ways to deal with the double counting of housing. The first is to subtract dwelling construction and let that be an intermediate part of the production of the final consumption good of housing. The left panels below show the effect of this on Australia’s GDP over the past 40 years or so. On average, GDP is 6% lower by excluding dwelling construction, although a little more volatile. 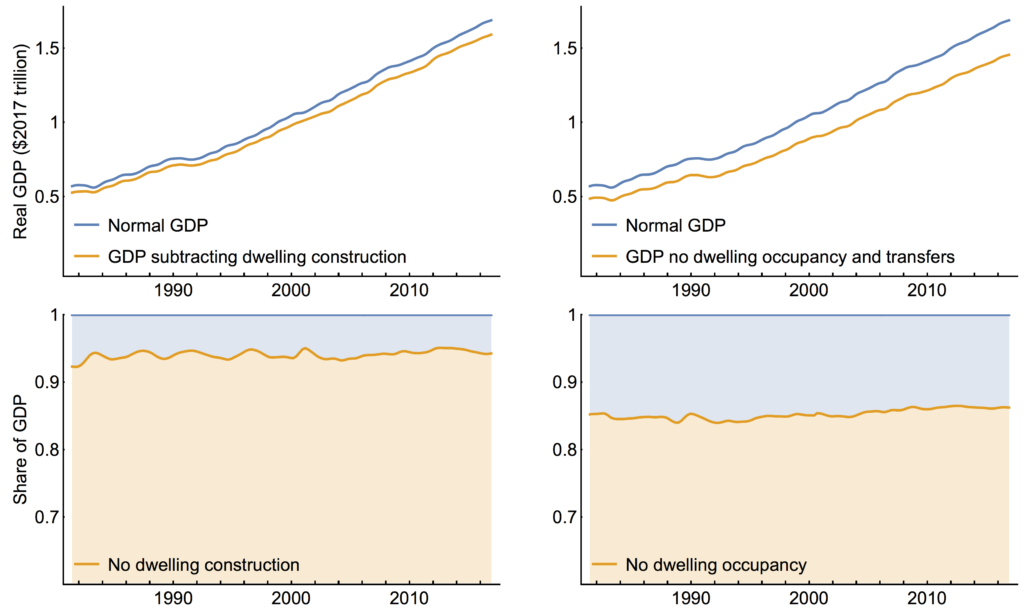 The second way to remove double counting is to remove the housing consumption good. This is a little more strange because it would remove the home rental market as well as the imputed rents owner-occupiers are estimated to pay themselves. The right panels show the effect of this on Australia’s GDP, and rather surprisingly, despite the two massive housing booms of the 2000s and 2010s, the share of GDP coming from housing consumption is relatively flat at around 12%.

While there is obviously an effect on the level measurement, the double-counting of housing doesn’t really bias any long term trends.

What can happen, however, is that during periods of high construction and/or high population growth, the short term GDP figures will stop correlating closely with the economic experience of households.

For example, the past four years in Australia has seen very high rates of population growth and dwelling construction. If we subtract dwelling construction, the average per capita rate of growth of GDP is 0.6%, compared to 0.9% using the standard metric (which itself is historically low).

A higher GDP also comes from new people occupying newly built homes as well as from building them. If we subtract the imputed dwelling occupancy, the average per capita rate of growth of GDP in the past four years in Australia has been 0.8% — again below the headline growth rate.

Over longer periods, the way housing is included in GDP doesn’t fundamentally change the patterns of growth. The average growth rate per capita is within 0.03% if we take a decade long view and compare the two alternative metrics. But over short periods it can disguise what is going on under the surface.

Lastly, the treatment of housing in GDP is just one of the many curiosities in this rather over-rated economic metric. In Europe since 2011, illegals drugs and prostitution have also been included using imputation methods. You may never trust GDP again!

Footnote: [1] This is not the only way housing is treated rather uniquely in the national accounts. The “fees paid to lawyers, fees and commissions paid to real estate agents and auctioneers, stamp duty, Title Office charges and local government charges” associated with buying and selling homes are also all counted in GDP, and in particular, as new economic capital. This is unusual because other legal fees and commission-based services are counted as consumption goods, and taxes are not counted in GDP.

Conflating stamp duty and transfer costs as actual economic capital (real buildings) leads to very strange analysis, like that reducing stamp duty increases output because it reduces the ‘cost of capital’. The graphs in this article also remove these transfer costs with the occupancy costs.

Economist at The University of Queensland
Cameron Murray holds a PhD from Queensland University and channelled his interest on corruption and rent-seeking into a book, Game of Mates: How Favours Bleed the Nation, which charts grey corruption in Australia. Murray's other interests concern environmental economics and property markets; he writes about these in detail for MacroBusiness, IDEAeconomics, and his personal blog, Fresh Economic Thinking.

Writing mostly. Also teaching the bright minds of tomorrow realistic economics at the University of Queensland. Chasing the kids. Sometimes time for football and rock-climbing.

Why is this important to you?

The political environment in the developed world is rapidly becoming more polarised than it has been for over half a century. I see this as a dangerous situation that makes it harder for people to get good information that is not tainted with views from the extremes.

What drove you to focus on economics. Was there a particular moment you can remember that led you to this field?

Observing the wilful blindness within large companies and organisations who seemed to have a knack for ignoring the obvious sent me crazy! As I began to see this more in our public policy debates I realised how much value can be gained by taking a step back and having an objective and systematic look at the world. Economics allows you to do this. If you can survive the first few years of indoctrination and keep your open mind, there is a lot of useful research going on in the field.

Making a difference. I actually was close to leaving economics to become a medical doctor in 2012 so I could at least know I was helping someone. But I decided instead to stay in economics and focus on corruption and related topics that I knew might not make a direct difference to many people but could make a systematic difference if I could share the knowledge widely.

For the whole world, the number one problem is the ongoing battle over the economic surplus.

Institutions that have funnelled wealth, income, and power, up the distribution are reaching their social limits. Between nations, decades of trade imbalances will likely reverse as previously rising nations stabilise, and new nations embark on rapid industrialisation. The losers from major changes to the distribution of global wealth will not be happy.

If you hadn’t become an economist what would you have done?

Chance and luck, just like always. Though I do believe there are long term patterns that repeat in the great arc of civilisation.

That finance is not an output of the economy, but an input to it. We had a chance to go back to basics and remember that the real economy is about producing things that people value.

Can you list some ‘baby steps’ out of the current economic mess?

Boost public spending on tax authorities so they can bring international firms into line. Vote out major parties to allow the diverse voices of the minor parties to rise up and reset the scope of public debates.

If you were a President / Prime Minister what would your first three pieces of policy be?

First, ensure that when political decisions result in windfall gains to private entities that these gains are taxed or sold by the government to recoup their value. Second, create a public bank with a mandate for investment in value-added export industries and renewable energy generation and distribution.

Third, ratchet up taxes on land, wealth, and inheritance.

I never thought the Sydney property market would be at a $1 million median price by 2016. I thought Trump would do better than expected in the election, but not win it.

Name the book that changed you.

Ultra Society by Peter Turchin. It made me stop thinking of economic growth as a competitive process, but a cooperative one. As an economist trained to see competition and understand its merits, I have now broadened my view to see how in fact competition and cooperation work together.

Nothing. Life is a lesson. It’s not something to be optimised. I want to make all the mistakes again… maybe a few more as well.

Give our readers, members and subscribers a piece of advice that has served you well.

From my Dad, about taking on new and challenging projects - “If it was easy, everyone would do it.”

Anything you would like to plug? Now is your chance.

One thought on “Did you know housing gets counted twice in GDP?”