We can only wonder if Madrid is under the delusion that simply taking over Catalonia’s government and having elections is their silver bullet solution. It is too dogmatic to understand that it is creating political martyrs for the independence movement to be inspired by. 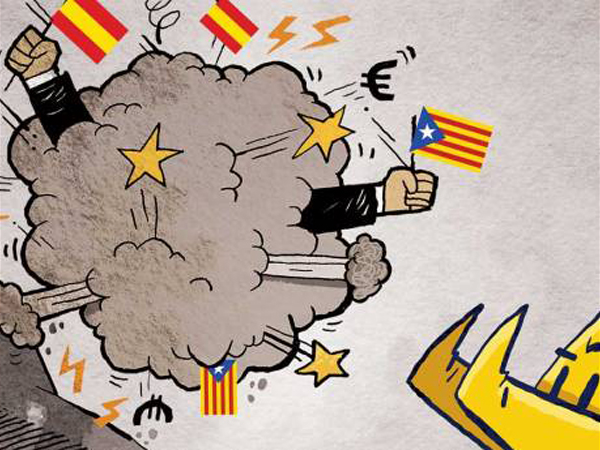 Madrid has stripped Catalonia of its autonomy, dissolved and then taken control of its government, and called for new regional elections on December 21. Just before all of that came to pass, the Catalonian government declared independence, which resulted in the leaders being charged with secession, a charge that carries a maximum of 30 years in prison. And if all of this wasn’t dramatic enough, a lawyered up Catalonian president, Carles Puigdemont, emerged on Monday in Brussels to continue the fight for Catalonian independence. With all of this drama the question remains, what will happen next? And how will this affect Catalonia, Spain, and more broadly the EU?

We can only wonder if Madrid is under the delusion that simply taking over Catalonia’s government and having elections is their silver bullet solution. If so then it hasn’t factored in the two million plus people who support independence and the countless others that want a referendum to put the issue to rest.

To further complicate things, the recently jailed referendum organisers Jordi Sanchez and Jordi Cuixart (the two Jordis) and the Catalonian cabinet, proves that Madrid is too dogmatic to understand that it is creating political martyrs for the independence movement to be inspired by. Furthermore, by not having dealt with the referendum issue politically it has amplified divisions. A growing divide that can be witnessed with each passing pro or against rally. For example a recent pro-union rally had more violence and more Falangists filling the streets of Barcelona.

What about that December 21st election? Will it be fair? Not if we take comments made by Alberto Rivera, the leader of Ciudadanos, seriously. He openly stated in Parliament that elections must only be held when the government can guarantee a result. How can they achieve a favourable result? No details are available yet, but many are curious if there will be any conditions on who will run in the next election.

Then there’s financial fallout which will add more gas to the political fire. An estimated 1,500 business have fled the region, or so it has been said. According to one Catalonian delegate, Marti Anglada, claimed on French news channel Cnews that King Felipe VI had personally called the president of Volkswagen to ask him to leave Catalonia and relocate his factories to other areas of Spain. If this is true, what would stop Volkswagen from moving their factories from Spain altogether and placing them say, in Eastern Europe? Perhaps not a good move considering that in April it was reported that Spain’s debt hit a historical high by growing 3.2% to 968,804 million Euros. More than 1,500 companies left Catalonia amid fears of independence referendum.

As far as expecting the Spanish government not to act violently, think again. The Spanish Foreign Minister Alfonso Dastis labelled the violence that occurred during the October 1st referendum as mostly “fake news” and acceptable. One wonders if the FM was aware that during his BBC interview they were showing video footage of police officers beating civilians while he spoke. It was similar to the Iraqi Information Minister under Iraqi President Saddam Hussein, Muhammad Saeed al-Sahhaf. During the 2003 invasion of Iraq, he unwaveringly claimed the Iraqi forces were defeating the Americans.

In the midst of this dizzying series of events, Prime Minister Mariano Rajoy dismissed the tribunal set up to investigate police violence during the Oct 1st referendum. Not many noticed that in the news cycle. That’s not all that he slid past the Spanish and international public. He managed to paper over with spanish flags the 500 pound Gorilla in the room, the Gürtel corruption case. Hilariously, Rajoy and his Partido Popular (Popular Party) vehemently defend the sanctity of the law while simultaneously being under investigation for fraud and bribery in the long running investigation that boasts 300 witnesses and 37 defendants.

Then there’s the European Commission which declared that Spanish government’s “proportionate use of force” during the Catalonia referendum was necessary to uphold the rule of law. It has big stakes in the outcome of a unified Spain. However, European history is full of examples of countries interfering in each others business. And according to Craig Murray, it is well known in diplomatic circles that the BND (German Federal Intelligence Service) funded the Ciudadanos party, which has taken the air out of Podemos and become their right wing doppelganger. Murray argues the reason for funding Ciudadanos was because Podemos was anti-austerity, and had they won, it would’ve been bad for the German Banks. Ironically, austerity is the driving force behind the growing call for independence.

By staying out of the growing Catalonian debacle, the EU is looking hollow and hypocritical. Even worse, their inaction is feeding into the hands of right wing European extremists. Recently, anti EU troll Nigel Farage has capitalised on the Catalonian crisis by stating that this injustice confirms why he was right about Brexit.

With all of these factors at play, where does it leave Catalonia, Spain and the EU? Not in a good place. The Catalonians who originally hoped to stay at the EU party but not at the Spanish table, must be shocked that their cries have fallen on the EU’s deaf ears. One can only wonder if this will lead to an anti EU sentiment in the region. Spain on the other hand will manage to keep Catalonia, but at a high price – its global image and its economy. What was a mere independence movement in Spain is at risk of becoming a rallying cry against the EU. All in all, the situation is now a tragic comedy of errors.

Miguel Guerra is an illustrator and writer, best known for his graphic novel series, Samurai Elf. He is also a featured artist in Heavy Metal Magazine.