Social problems cannot be hacked. The popularisation of ‘Hack Days’ is simply the privatisation of poverty. Technology will never be a supplement for good government. Around the world, elected leaders have abdicated their responsibility for their citizens to the private sector. The only thing worth hacking are parties themselves.

I am troubled by the growing popularity of ‘Hack Days’ that have popped-up all over the world in recent years. These include Hack for Democracy hosted by MIT, Hack Oregon (hosted by the Mayor’s Office) to improve disaster resilience, transportation, housing affordability and local elections, and Hack the Police hosted in London by the Metropolitan Police Commissioner on the 9th and 10th of December to ‘help police gather evidence, make it easier to give statements and improve the wellbeing of officers and victims’.

In Houston Texas, the Mayor’s office floated the idea of developing an app that encourages citizen donations to charities to provide long term solutions for homeless residents.

Meanwhile, in Australia, members of the Liberal Party have been promoting Hack for Domestic Violence, (a non-government) event hosted by Vibewire.

Almost all of these events had at least one corporate sponsor. These include Microsoft, Amazon Web Services, Academy Xi, and Blue Lights Digital.

In almost every circumstance, events were organised and attended by largely white, middle-class, educated, libertarians who believe the private sector is more capable of delivering solutions than the government whose responsibility it used to be to, if not solve, then at least address chronic problems like poverty, homelessness, domestic violence, sexual assault, mental illness, affordable housing etc.

While civic-mindedness is always admirable, technology will never be a solution for social problems and should not be the result of private partnerships, appification or incentivising bleeding-hearts to part with even more cash than they already pay in taxes.

(Sidenote: I am not anti-charity. Organisations such as Médecins Sans Frontières, The Innocence Project, the Royal National Lifeboat Institution, Lifeline, Wayside Chapel, and The Asylum Seeker Resource Centre, do more good in a day than most governments have done in years. It saddens me that so many organisations have figured out how to improve their corner of the world on a shoestring budget with little or no government support).

There are simply zero economic arguments against providing social housing, public infrastructure so people can get to-and-from their minimum-wage jobs, or devoting as many police resources to prosecuting domestic violence, rape or sexual assault as are allocated to road safety operations. Inflation only ever becomes a problem when resources are in over-supply. (Guess what? They’re not. Not even close). Objections to government spending – on anything, but particularly on protecting the world’s most vulnerable – can only be ideological.

‘Hack For’ events is simply another way of privatising poverty.

All governments that issue their own currency have had the ability to fix serious social problems almost overnight, but have simply chosen not to.

This comes back to what government is for. Once upon a time, we elected governments to keep us safe, represent our basic financial interests, and plan the local economy to meet the interests of those who live and work within them.

Over the last 30 years, social safety nets have been replaced by rising private debt and selective industry intervention. Populations have been abandoned by their governments who have completely abdicated their responsibility for the wellbeing of their citizens. But the working poor, the unemployed, the Indigenous, communities of colour and the LGBTIQA have had it far worse, for much longer.

The gender pay-gap keeps vulnerable women in violent situations because they cannot afford to leave their abusive spouses.

Homelessness is a direct consequence of gentrification, and the reclassification of property as a form of income.

Prostitution and sex-trafficking are the result of systemic financial discrimination against the country’s most vulnerable. And the lack of police and public-sector resources to address these problems and the seeming disinterest of the justice system to prosecute offenders on a large-scale keeps this cycle of violence and vulnerability ticking over.

These are all economic problems that could be solved with political will.

As Christmas approaches, and we take stock of the chaos the year has wrought, remember that whatever financial security we might have achieved, it is the result of a system designed by exceptions to the rule – leaders who defied their own parties to create good government and local economies that served the interests of those living and working within it. If you feel abandoned and effed-off by the establishment, just imagine how much more difficult it is for those who struggle daily to make ends meet.

No hackathon can replace the Roosevelts, the Wallaces, the Corbyns, the Sanders and Varoufakises of this world.

We need better government. And we need leaders who prioritise the needs of their constituents over their political careers.

The only thing worth hacking are parties themselves.

Sign-up even half those numbers as new members, bring them to the next meeting and call a vote, we could toss out bad policy overnight.

Technology will never be a supplement for good government. 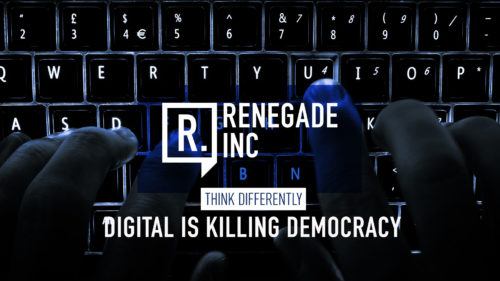