An old friend of mine sent me a message a few days ago after reading ‘The Insidious Nature of Power‘, a piece I wrote for Renegade Inc. in September 2017 here.

“I would love it if you did some analysis from a UK standpoint. What do you think of where we are on Brexit? Do you think the UK is just not worth commenting on?”

These are good questions. Why does a Brit spend most of his time commenting upon the US, Russia and the Middle East…& how does the UK fit into all that?

To make any sense out of what’s happening in the UK, or anywhere else for that matter, we need to look at the whole board, understand what the game is and how it’s played.

The game is ‘power’. The pursuit and maintenance of power has produced, overtime, a number of systemic issues which are now ‘critical’; factors that cause the most amount of pain to the largest number of people. These issues transcend national boundaries. I described them in a piece I wrote for Renegade in February 2018, ‘21st Century Plague’.

Here is the thesis, condensed into the 280 characters of my ‘pinned tweet’, designed to say to visitors: ‘This is what I write about”

The 'disease':
1. A monetary system rigged for the banks/corps
2. A military-industrial complex that requires endless war
3. Politicians that are controlled by 1&2
4. Media that is complicit with 1-3
The rest is 'symptoms'
If you want a 'cure' – get used to repeating yourself pic.twitter.com/EuyB9zQoAL

Clearly, the United States is where most of the monetary power is vested; the Middle East is where most of the war is conducted, and where a great number of the natural resources are located. If you listen to the media, of course, it’s not about oil and gas; it’s about freedom, human rights and democracy. This, of course, is rubbish…but important rubbish: the media is the ‘glue’ that keeps the issues stuck.

In short, most of the mischief in this world is caused, exacerbated, supported, facilitated, and/or paid for…by or through Washington DC. That is why lobbyists from nations like Israel & Saudi Arabia, arms manufacturers like Lockheed & Raytheon, banks like JP Morgan & Goldman Sachs…spend an absolute fortune ‘buying’ Congressmen…so they can write their own laws, draft their own regulations and fund the war machine through massive state ‘hand-outs’ like the $730bn annual defence budget. The lobbyists are ably assisted by ‘think-tanks’ like ‘The Atlantic Council’, which are little more than a collection of mediocre intellectuals who flog war propaganda via corrupt politicians and a complicit media…to a gullible public. And abracadabra…that’s how you get endless wars in the Middle East.

So where does the UK fit into this?

For over a century, London had been the centre of the ‘western empire’…until the end of ww1, by which point the balance had shifted, irrevocably, to Washington.

I don’t think this needs much elaboration. The baton was passed, a point conceded by the British Propaganda of the time. After 178 years of “Rule Britannia, Britannia rules the waves” the UK now portrayed itself arm-in-arm with the new kid on the block ‘Uncle Sam’: 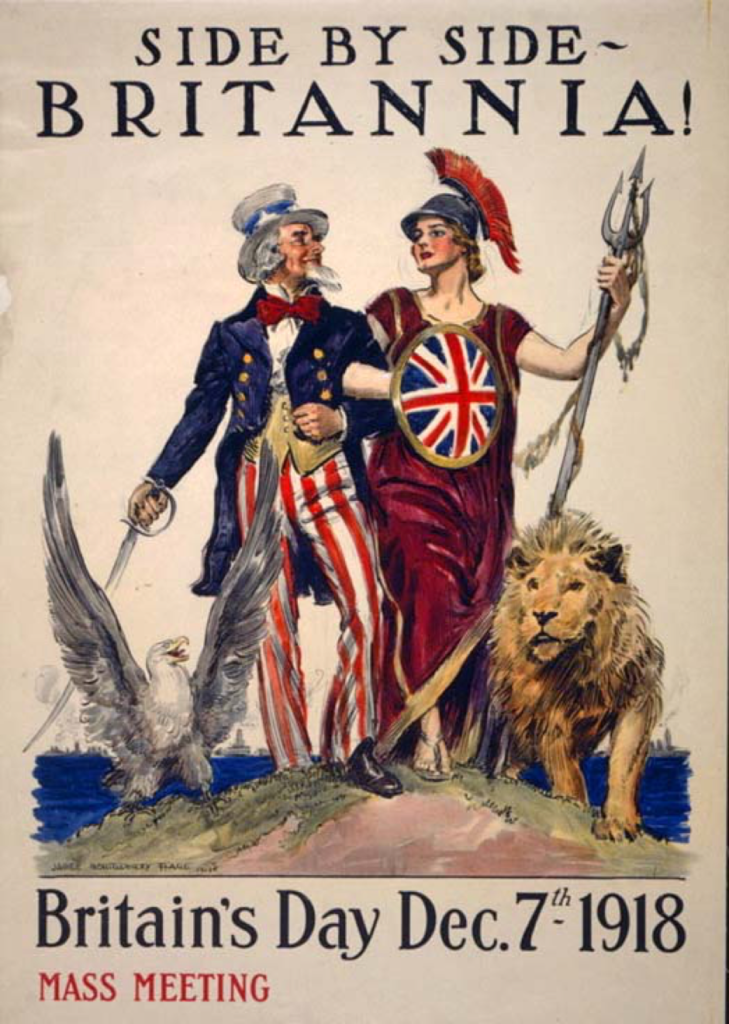 Fast forward 27 years, and the world had been through the Great Depression and WW2, leaving every western nation up to its eyeballs in debt with the US; which had most of the gold, the atomic bomb, and a highly tuned economy that did not need to rebuild itself – the war had been fought in Europe, Africa and Asia. The world, with the sole exception of the Soviet Union (which had lost over 26 million people defeating the Nazis, and had sacrificed more than any other nation to ‘win the war’)…was at America’s feet.

It took the outgoing hegemon a long time to ‘wake up and smell the coffee’. The ability to throw your weight around with impunity disappeared faster than the hubris that went with it

The UK didn’t get the point until after Winston Churchill had retired in 1955, making way for a guy who had waited over ten years for the top job – his long-time Foreign Minister, Anthony Eden. In 1957 Eden invaded Egypt in response to Nasser’s nationalisation of the Suez Canal…just the sort of thing that Empires do…except this time President Eisenhower had other ideas. He threatened to sink the pound by selling UK sovereign debt…at which point the penny, rather than the pound, dropped for the humiliated Eden, who withdrew. This signalled to the world, but mainly to the UK, since everyone else already knew…that Britannia was NOT a world power any longer.

The old empire became the new handmaiden – the ‘special relationship’ became even more special, at least for the Brits…

With the notable exception of Harold Wilson, who refused to commit the UK to the Vietnam War, Britain has followed the US obediently into battle & supported its ‘operations’. In the case of Thatcher, but particularly with Blair, sending our young people to kill, bleed and die in service to the ’empire’ agenda, was done with a passionate and ideological zeal.

Even Wilson was accused of being Johnson’s puppet. It should be noted, however, that Wilson is the only PM on that list to have been ‘hounded’ by our security services, but that’s another story…

In a triumph of fiction over reality, the only PM to resist ‘bending the knee’ to the President was Prime Minister Hugh Grant in the movie ‘Love Actually’, who finally ‘strapped on a pair’ when President Billy Bob Thornton, a toxic blend of Clinton sleaze with Bush swagger, tried to seduce his personal waitress and soon-to-be girlfriend, Martine McCutcheon.  Interestingly, Grant’s character immediately became a hero, on screen and for much of the British audience, who, contrary to the ‘special relationship’ garbage in the media…know that we are a US puppet…and are not very keen on the idea.

The movie was released in November 2003, just a few months after the invasion of Iraq. I think that one of the numerous things that Blair didn’t understand, and still doesn’t, is that the country wanted a ‘lion’ to stand up to Bush, not a ‘toad’ to kiss his backside. Blair confused the two, as do a lot of ambitious, self-obsessed & immature men, particularly those who think they are doing ‘God’s work’.

Here is the clip, with a nod to the writer, Richard Curtis; a guy who knows how to make people laugh and cry, sometimes simultaneously:

If history is written by the victors, propaganda is the first draft

It’s important for me to acknowledge that none of this is history, it’s my story. Personally, I think it’s more accurate, and certainly far more honest than the version you will read in the Guardian, the Times or the FT…but then I would say that wouldn’t I? The point is that you and I have an active role to play in determining the story created for our grandchildren. We need to take that very seriously…the government does, and their story is awful…

So where are we now?

We are a nation governed by a spineless and duplicitous government, that in the space of the past few months has:

Governments should put their principles first or stop talking about them. The clue is in the word: latin; princeps, princip; ‘first, chief’

You will have already made up your mind about Brexit, based upon your principles…or your ideology…or your personal situation…or because of what you read in the newspapers…or to go along with your crowd…or on the basis of a pragmatic assessment…etcetera…

Whatever…the truth is this: We do not all put the same ‘first things first’. The referendum, whether you like it or not, was a vehicle for allowing the people who turned up to vote, to decide: ‘in’ or ‘out’. I voted ‘out’. Here’s a condensed version of why I did that – a comment I made during a recent discussion on Twitter:

“I didn’t vote ‘leave’ because I’m a bigot, a moron, a sheep who listens to the bloke down the boozer who did O’ levels…or a stereotype. I voted ‘leave’ because large, centralised govt is ALWAYS anathema to democracy”

That’s it. That’s always been it, and that will always be it…for me. So long as the EU is a centralised, power-amassing organisation, dominated by federalists and globalist elites, who think they are qualified to govern hundreds of millions of people, from over 2 dozen diverse cultures…my answer will be the same – ‘no thanks’.

Centralisation of complex systems does not work, particularly when the constituent parts are human beings.

Speaking personally, it amazes me that so many people on the left – good, bright people – recognise the injustice and the dangers of an elitist political and economic system…but somehow don’t see that this is exactly what the EU is…at its core. The EU is one thing – posing as another. The following image could just as well be headed ‘The EU’ or ‘Federalism’: 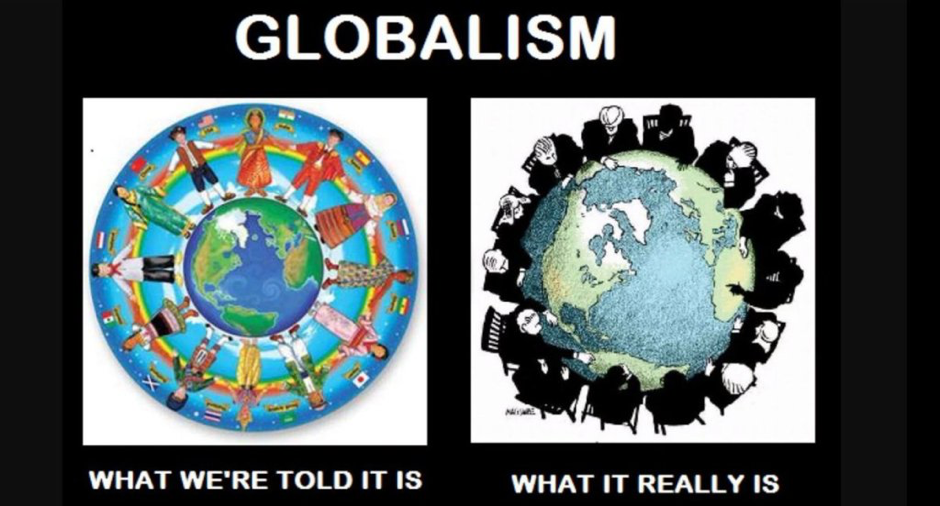 One more thing before I get down from this horse…the euro is a flawed currency, operating in an unstable banking system, based on sovereign debt that will never be repaid, which for political reasons cannot be pooled, as it should have been BEFORE the euro was created. This will result in a European Sovereign Debt Crisis, at the point one or more of the following occurs:

Me?  I’d rather not be in the inner or the outer ‘club’ when that happens.

What of the UK’s future?

If the UK is to help bring about a peaceful & honest world (my preference), it needs to stop pandering to the vested interests that run Washington, Brussels, and Whitehall itself.

Hard? Yes. Impossible? Only if you say so. Personally, I think we need to open a new dialogue with ourselves:

What role do we want to play in the world?  And what do we want NO PART OF?

One thing is for sure: All the recent talk from Defence Secretary Gavin Williamson and his Labour Shadow Nia Griffith, about being a ‘Tier One Power’…is complete garbage. We are not a major power, and I believe that few of us “give a monkey’s” about that.

Finally, here’s what I am most clear about: There will be no peaceful and honest world until we resolve the issues I described above:

Like I said: The rest is ‘symptoms’. If you want things to change, get used to repeating yourself.