Hillary Clinton’s denial tour of America demonstrates she still hasn’t learned the key lesson of the election. Her book is a series of specious arguments for the dim-witted, filled to the brim with excuses and lies that embodies Washington’s pay-to-play swamp culture. This is precisely why nothing ever gets done in DC —politicians get paid off and everyone else gets screwed. 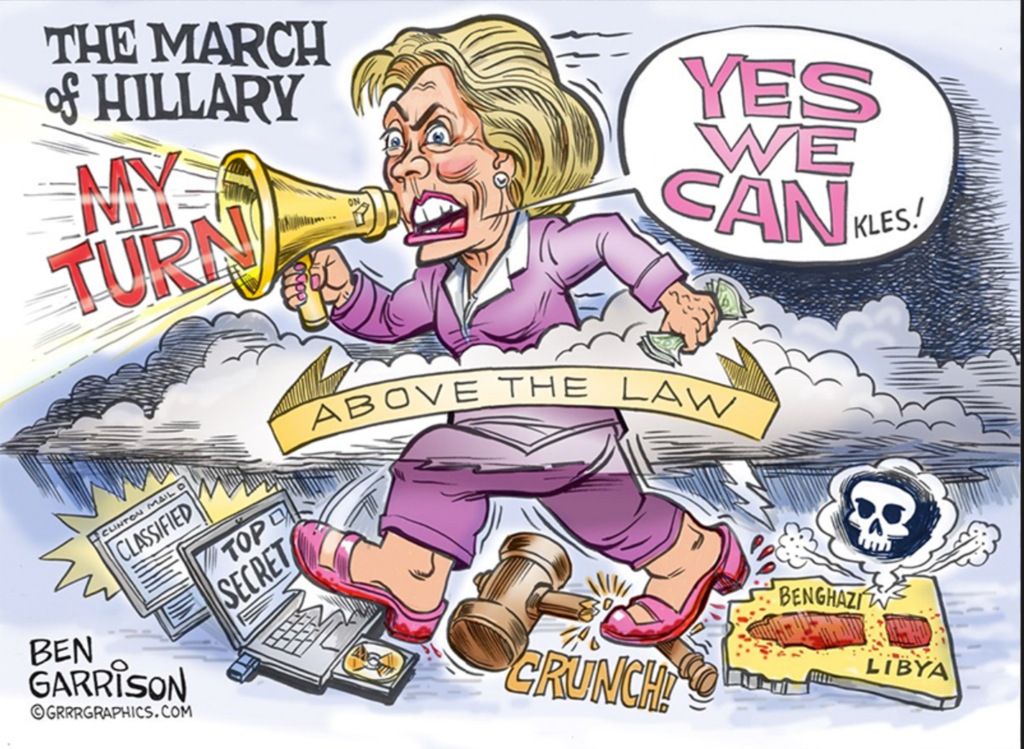 Hillary is on a book tour to promote her new book What Happened and explain why she lost the election. Unfortunately, Hillary refuses to accept a smidgen of personal responsibility for the loss and refuses to show any regret or humility for her actions. So, let’s examine what happened and not be blinded by Hillary’s “too many excuses to name tour”.

My video above illustrates a fraction of the crimes against democracy Hillary Rodham Clinton committed over a more than twenty-year reign as paymaster in Washington’s pay-to-play swamp. The results: Hillary’s campaign spent around $2 billion dollars—and lost!

America is fed up with Hillary’s lies and hypocrisy, that’s what happened.

During the presidential election, Hillary Clinton’s campaign joined forces with the USA’s uber-liberal, corporate-owned media to spin a false narrative to misdirect and terrify voters, subliminally instilling a message of fear and hate. This indoctrination, crafted to weaponize a payload of fear and hate, went like this: Donald Trump is racist, he is a white supremacist. He is misogynistic, sexist, anti-Semitic, xenophobic, homophobic, Islamophobic and a serial liar. He’s the next Hitler and the most dangerous person ever.

And it didn’t stop there. By inference, all Trump voters, indeed all Republicans and Trump appointees, must share similar values and are “a basket of deplorables”. Hillary and the liberal elite continued to push this message, even harder after Hillary lost the election.

Before the 2016 presidential election loss, Hillary stated that “We’ve been around for 240 years. We have had free and fair elections. We’ve accepted the outcomes when we may not have liked them and anyone who doesn’t is an enemy of democracy.”

Although a nice sentiment, Hillary and the rest of the liberals have shown, once again, that they only believe in democracy as long as it goes their way. Hillary, Obama, the uber-liberal media and many staunch supporters, aka “the resistance”, refuse to accept the outcome of the 2016 elections. Hillary’s supporters, 93% of the liberal media and the republican establishment will keep trying to nullify the election result.

Never in the history of America has the loser in a presidential election, along with the previous president, tried to invalidate an election because they didn’t like the result. But that is exactly what Clinton and Obama are doing. They are actually calling for their supporters to resist everything President Trump initiates. Clinton and Obama have put America on a dangerous trajectory involving virtue signalling, social justice, identity politics, political correctness and entitlement.

Just look at Barak Obama’s final European apology tour last November. While in Germany, instead of calling for unity and an end to the professionally organized, hate-filled, riotous Antifa protests against Trump’s election, Obama gave protestors a green light by stating, “Don’t be silent.” The New York Times reported, “In Obama’s remarks to activists, Obama urged them to stop moping and ratchet up their opposition to Mr. Trump by Thanksgiving. He promised to join their cause soon after, telling them: ‘You’re going to see me early next year, and we’re going to be in a position where we can start cooking up all kinds of great stuff to do.’”

Hillary Clinton and Obama have never condemned any of the Antifa’s violent protests that are driving a wedge between Americans. Instead, they are endorsing suppression of free speech by a “Hate Speech” ban. This is nothing less than an attempt by Clinton, Obama, the “Deep State” and some Republican operatives to overthrow our democratically elected government. Senate leader Mitch McConnell even told Donald Trump during their first meeting that he didn’t want to hear any more about draining the swamp.

Clinton’s book continues to highlight her refusal to accept Trump’s presidency. Her book is 506 pages of lies, justifications and laying blame—which she lays everywhere except on herself. At the official What Happened launch in New York, Hillary Clinton blamed the liberal media for her loss. In her book, Clinton claimed the media favoured Trump by giving him free publicity and spending an inordinate amount of time reporting about her emails. She also called for an increase in liberal media programming to counteract the right-wing propaganda conveyed in today’s media. Unfortunately, Clinton’s views have no basis in reality.

Contrary to Clinton’s claims, the heavy media coverage on Trump is not out to boost Trump but to punish him, as anyone can see by simply looking at the following graphic.

Congressman Lamar Smith, founder of the House Media Fairness Caucus, reports that 91 percent of Trump campaign coverage was negative despite the fact that 55 percent of the public is weary of the anti-Trump tone in coverage. Smith also reported that 96 percent of media campaign contributions went to Democrat Hillary Clinton. This negativity towards Trump has continued even during his presidency. During the first six months of his presidency, news coverage of Trump was overwhelmingly negative (approximately 90%).

Hillary’s book is a series of specious arguments for the dim witted in an attempt to lay the ground work for future disruption. Hillary’s book is filled with excuses and lies that embody Washington’s pay-to-play swamp culture. This is precisely why nothing ever gets done in Washington—politicians get paid off and everyone else gets screwed.

Of course, her book could also be a lead into “Why I will be President in 2020?” or “Why Chelsea deserves to be President next?”

Mitch Feierstein is a British-American investor, banker and writer. He has worked as a columnist for the Daily Mail and currently works as a columnist for The Independent and the Huffington Post. Feierstein appears regularly as a financial commentator on SKY, BBC, and RT. In 2012 he published his first book, Planet Ponzi, which gives his perspective of the global credit crisis.

Getting to know Mitch Feierstein:

- How do you spend your days?

In addition to acting as an advisor to several family offices I am a Managing Director at Storia Inc. a multi-media platform created to change the paradigm in digital content creation, delivery and consumption. Storia will leverage the generational shift away from traditional media to 'mobile and video first'.

-What in your answer to Q1 is especially important to you and why?

It is important to make an impact that can positively influence change.

The west has lost its way, capitalism and free markets have been bulldozed by the interests of .001% of the USA’s gargantuan Military Industrial Complex. Add in a dash of 'narrative designed to move forward specific political agendas', a controlled media, owned by six mega corporations and a cabal of reckless misguided academic central bankers - you have the perfect recipe for either:

1) The worst global economic depression in history, or

2) Civil war, as the left’s political repression of speech, thought and conduct has become 'nazism of the left,' which will end badly, or

- What drove you to focus on finance & investment? Was there a particular moment you can remember that led you to this field?

Yes. When I was in college I was fascinated by everything 'Wall Street'. I was drawn in by the action and went to work in World Trade Center, Tower I in the very early 1980’s. OUCH.

- What drives you professionally?

Every day presents a different set of challenges.

-In your opinion what are the three biggest problems facing the developed and developing world?

2)Non-elected politicians in Brussels that want to strip EU citizens of sovereignty, liberty and democracy.

3) Extremism by the left: A 'social-justice' movement designed to end conservative thought. It seems like totalitarianism because it is. The left are only tolerant, accepting, inclusive if you agree with their opinions – when you disagree they become intolerant, violent fascists.

-If you hadn’t become an investor what would you have done?

Played golf on the PGA tour.

-If you look at recent history, can you identify a turning-point that explains how we come to face the peculiar challenges of today?

It was the excesses of the 1980’s and 35+ years of failed neo-liberal thought and policies that began with bill Clinton and ended with Obama. In reality, this was plunder, (financial fraud), on a massive scale that saw wealth inequality ratios skyrocket.

It started with Larry Summers and Robert Rubin’s convincing Bill Clinton to scrap Glass-Steagall – this allowed securitisations and use of derivatives as speculative financial instruments or weapons of mass financial destruction that allowed creation of massive credit, leverage and debt.

-What are the lessons we failed to learn during and since the 2008 crisis?

Nothing learned – we have re-inflated the same bubbles only larger – no meaningful deleveraging and risk assets are now even more risky.

- Name one measure we might implement immediately to improve the situation.

- If you were a President / Prime Minister what would your first three pieces of policy be?

2) Disband and dismantle the deep state and shadow government operatives working on behalf of the military industrial complex en mass.

- What was your biggest & / or your most recent mistake?

- Name the book that changed you.

- What would you do differently if you were to start all over again?

Nothing, no regrets I move forward!

- Give our readers, members and subscribers a piece of advice that has served you well.

Never invest in anything you don’t fully understand and never, ever believe that 'it is different this time'.

- What is your main anxiety where you and / or your family are concerned?

How the coming global financial collapse unfolds and will DC be stupid enough to allow WWIII.

- What gives you hope for humanity?

As we near our darkest hour, a ray of sunshine will brightly illuminate the process in which we may begin to rebuild our crippled, corrupt and broken financial and political systems from the ground up… The revolution is coming prepare now…