In the nineteen seventies I was a musician…of sorts…which means that I didn’t get a record contract or the fame, fortune & free cocaine that came with it. Given the size & composition of my 21-year old ego, that was undoubtedly a blessing; as became apparent when I stumbled on the work of Alan Watts and other ‘inner-worldly’ classics such as ‘Zen and the art of Motorcycle Maintenance’…before any serious damage could be done.

The other day I came across a battered old recording of a song I wrote in 1976, called ‘Wheels’. I played this at every gig where my intention was to make a socio-political comment, which was pretty much all of them. My one brief experience of national exposure (a few seconds on the 6 O’ Clock News) came at a ‘Rock Against Racism’ gig on 16th August 1977. I say ‘gig’, but this was not the usual student’s union hall; this was performed during what became known as ‘The Ladywood Riot’. For those of you not familiar with this event: The National Front, the forerunner of the BNP, were running a candidate in a predominantly black neighbourhood…purely for provocation of course. Duly provoked, myself and about 5,000 other people turned out in a counter-rally. One of the organisers was a friend of mine, a Rastafarian post-grad student at Birmingham University. He asked me to sing some of my stuff through a very crude PA system situated on top of a Ford Transit parked directly in front of the police lines…10 metres from the National Front…5 metres from the counter demo. I was accompanied by two friends & fellow musicians, one of whom was 4 months pregnant. I have been in more stressful situations but I can’t think of any right now. 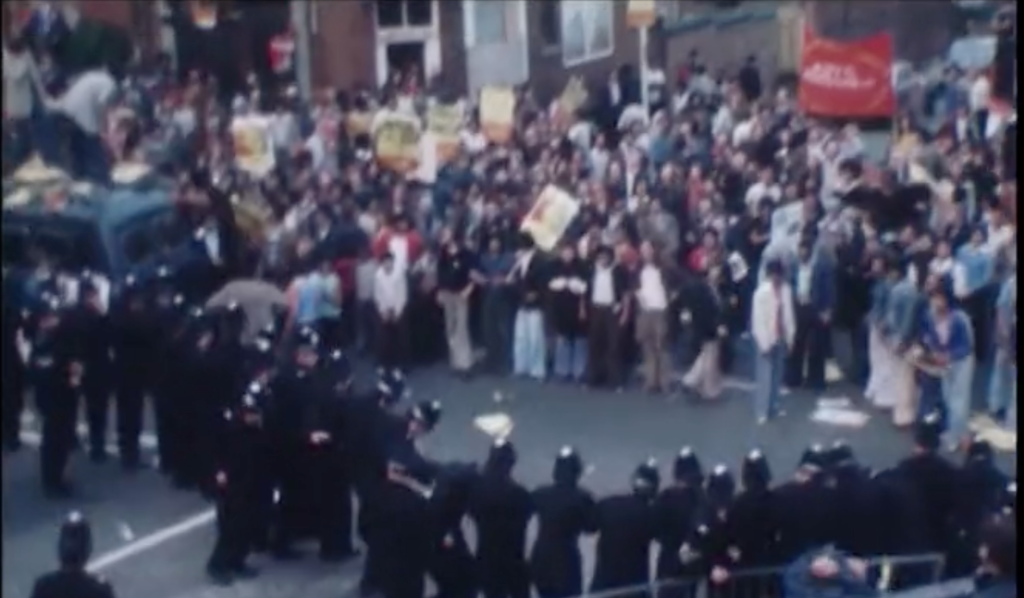 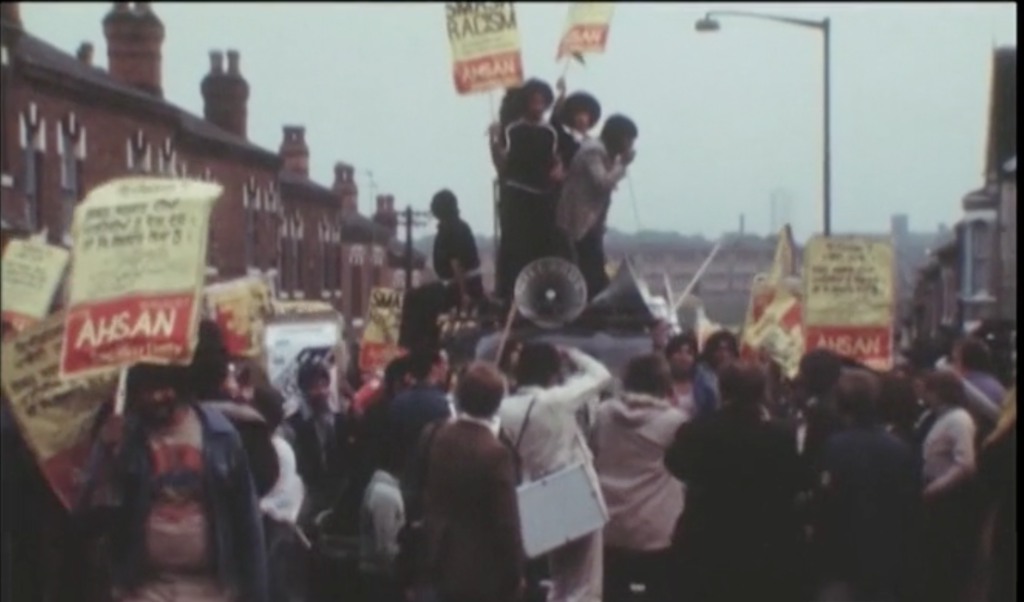 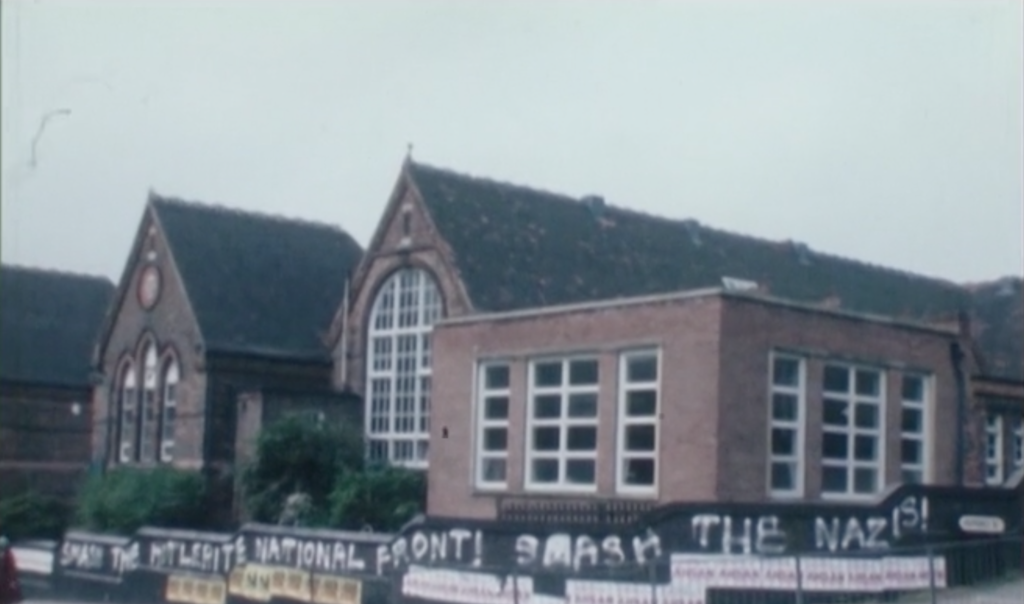 Anyway, for reasons I won’t bore you with, ‘Wheels’ rolled back into my head the other day, along with a realisation: If I were to write that song today, barring some of the words (I would use ‘human’ rather than ‘worker’) and a certain naiveté that is compulsory in a 21-year old…I would say pretty much the same thing. Despite the passing of forty years, countless ‘major shifts’ in government policy and a number of catastrophic wars; a period during which I have travelled the world, built a business and had a family…the fundamental ‘disease’ in our society, and my revulsion for its source, has not changed…not one jot.  Here’s the song, recorded in Cardiff in 1976 (cocaine was provided on that occasion):

The ‘YOU’ I was attacking in the song, was the same corrupt system of bankers, arms-dealers, corporations, ‘old money’ & bent politicians…then…as it is now. Nothing has changed fundamentally. The haircuts are different, and nobody wears 28-inch flairs anymore…but cosmetics aside, the system hasn’t changed. Whether you call it corporatism, crony capitalism, plutocracy, oligarchy or Neo-Liberalism – it’s the same.

It is not built on free trade, fair trade, honesty, integrity or any of the values that are proclaimed on its behalf. It is essentially a parasitic system of ‘trickle up’ at home, mixed with ‘loot and skim’ abroad…presented behind a facade of freedom and humanitarianism. It’s bullshit, and it’s ‘deliberate’…which makes it ‘evil’. 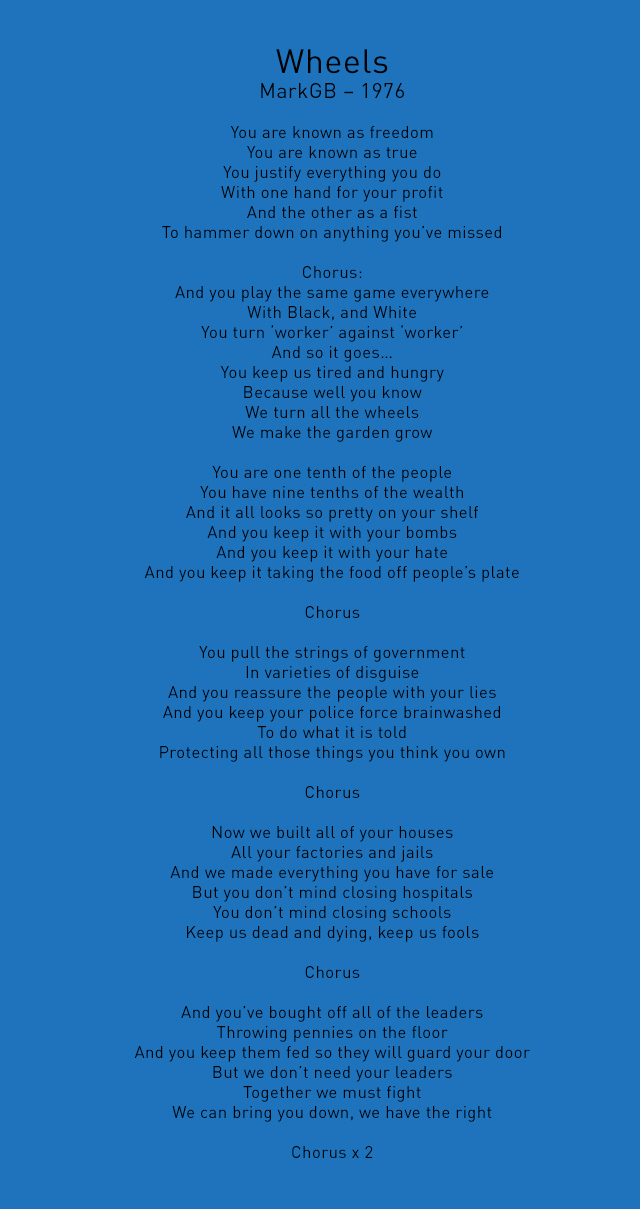 4 thoughts on “‘Wheels’ – a song still too relevant today”