If positive social and political change worked top down, we wouldn’t have to make this programme. Sadly, it doesn’t. So at a time when the political class is out of ideas and the corporate class is out of excuses for its behaviour, the job of finding new perspectives, insights and ideas falls to the independent media.

So here it is: The Renegade Incs and what we learned in 2017 – which, admittedly, isn’t the catchiest of titles – so a pithier one is: ‘What You Won’t Hear in the Queen’s speech’.

As a busy year draws to a close we look back at those people who have inspired and enlightened us in 2017. This is the first of two shows that are a whistle-stop tour around the thinkers, writers, doers and Renegade types we met over the last 12 months.

We kick-off with Professor Steve Keen. He is an economist, but thankfully not one of those mainstream types that thought everything was tickettyboo in 2007. He is the author of Debunking Economics and Can We Avoid Another Financial Crisis.

Everyone’s allowed their favourite graph and ours is this one: 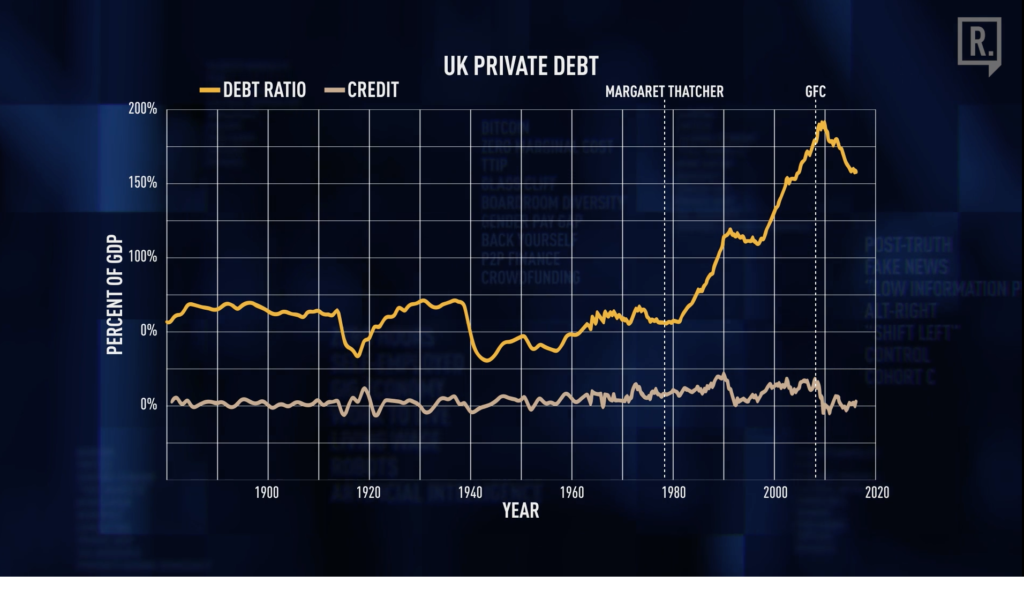 “The UK is classified as one of the walking dead of debt,” Professor Keen said.

“You already have the crisis, you’ll see on the graph that debt levels peaked in 2010 and has come down a bit, but you’re still carrying three times the average debt level you had back before Maggie Thatcher.

“The countries that are going to have a crisis are those that borrowed their way through it.”

The borrowing came from the private sector (homes and businesses), not the public sector. This is particularly true in China but also South Korea, Canada, Australia, Belgium, Norway, Sweden, and of course the UK. 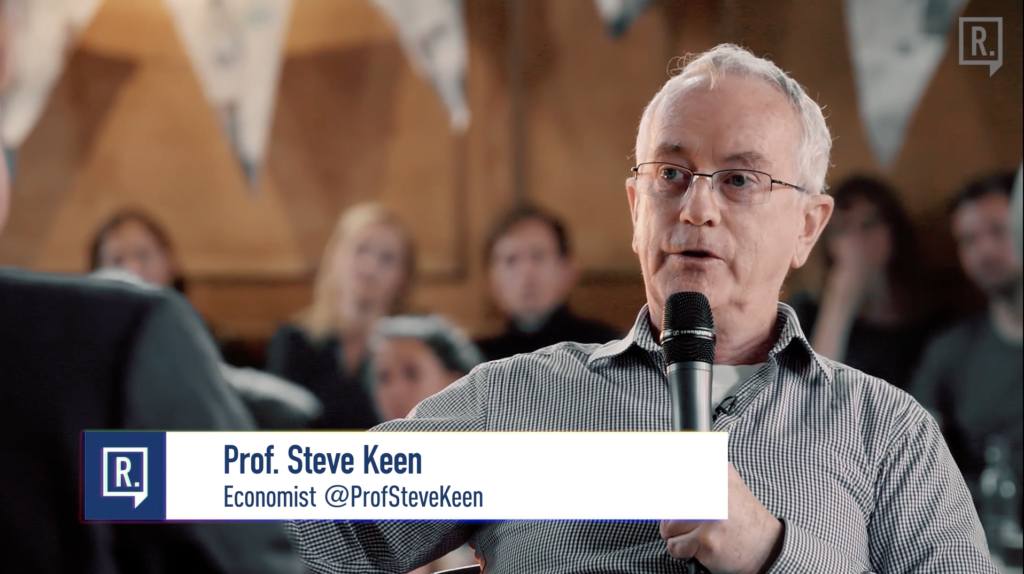 These economies are all headed for a slump because they did exactly what the UK and America did before the crisis: they bought up big into a speculative bubble, the economist says. Housing bubbles in particular.

“The increase in debt each year I define as credit,” he said. “Credit was such a large part of GDP, the demand was huge. The economy is booming. You get to a point where people won’t take any more debt. A lot of projects fall over. People stop borrowing and that entire segment of demand evaporates.”

So the next time you hear someone asking if we can build a Margaret Thatcher museum, remind them that in austerity Britain, we’re living in it.

Another Renegade economist, Kate Raworth, who is also critical of the mainstream, explained what has happened to economic theory and how we have inherited a skewed system that is unfit for human consumption:

“These theories are so out of date with blind spots that economists barely even go back and look at the roots of where these ideas came from,” Raworth told Renegade Inc. 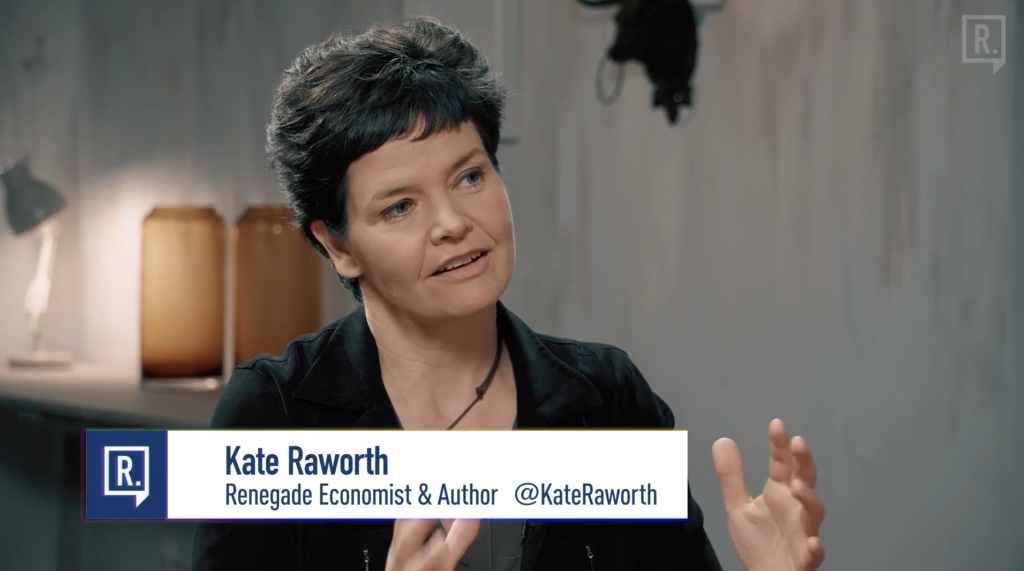 “Economics has become a self-fulfilling complete theorem unto itself, which is taught as if it is the mantra to take up,” she says. “It has to be questioned. We have to go back and examine those roots to see what was wrong with them.

“The caveats and blind spots in economic theory have laid an open space for a very powerful story to be built up which is the narrative of neoliberalism which began in the 1940s. A small band of economists realised there was opportunity to write a new narrative about what the economy was and what it was for.”

In April 1947, in a little Swiss village, a small band of economists met with plans to rewrite the global economic story and they called it ‘neoliberalism’. Their method was ingenious. They described each economic actor with a set of such powerful traits that the rest of the script almost wrote itself. In the 1980s their story was finally put on the international stage.

The plot was loaded from the very start:

For the last 40 years we’ve been told that the market is efficient, so give it free rein. That the state is incompetent, so don’t let it meddle. That trade is win-win, so open your borders. That the commons are tragic, so sell them off. That there’s no such thing as society, so ignore it.

And we were told that the household is domestic, so leave it to women.

With such a cast list, the triumph of the market seemed almost inevitable. It has driven us into social and ecological crisis. But we were also told that finance is infallible. But that theory was so clearly disproven in the Global Financial Crisis that it has called the rest of the story into question too. It’s time to ditch this outdated neoliberal speech. We need a new economic story that’s fit for 21st century. One that puts the economy in service to life.

German monetary and development economist, Richard Werner told Renegade Inc that the National Income Accountants who think a lot about the overall economy and how to measure it, have been struggling for decades over what to do with the financial sector. Werner is a Professor at the University of Southampton.

“Why? Because GDP is actually created by national income accounting by adding up value-added activities,” he said. “That’s where the financial sector has a problem. What is the value added?

“It has been so difficult that essentially the National Accounting statisticians have to make up a fictional value and just add it onto GDP and say ‘okay, that’s maybe what the financial sector is doing’ because essentially there is no value added, there’s value extracted and so really you need to subtract it from GDP.”

The City and Wall Street are wealth destroyers, not wealth creators. British house prices have gone up-and-up and bankers have been allowed to create money out of thin air to keep it happening. 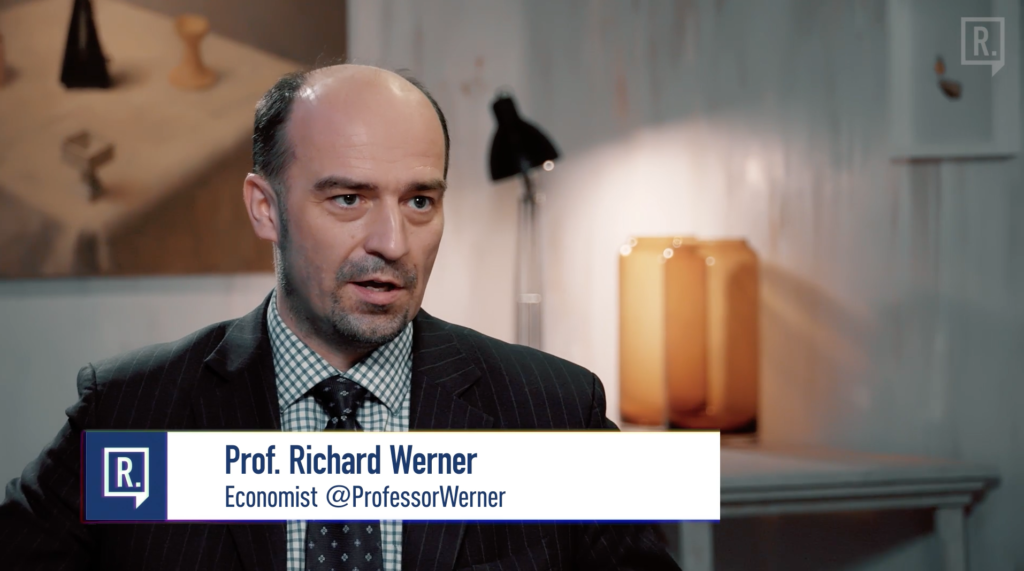 “It’s probably more than 70 percent of all lending,” says Professor Werner. “Actually way more than that, is bank credit creation. So money creation for financial transactions, for asset transactions, for purchasing ownership rights. But now you have a problem. Why? Because you’re creating new money, but you’re not creating new goods and services. You are simply giving somebody new purchasing power over existing assets and therefore you must push up asset prices. You can draw a chart where you show asset prices, land prices, property prices in the UK and they will match very closely, as I’ve shown in Japan and other countries. That also creates inequality.”

Selling each other overpriced houses, backed by a banking system that has a bonus structure based on selling people private debt hasn’t served the majority very well. But house prices only ever increase, and that isn’t going to change… is it?

Senior Research Associate at the Institute for Innovation and Public Purpose and Author, of Rethinking the Economics of Land and Where Does Money Come From?, Josh Ryan-Collins told Renegade Inc that the UK is reaching a tipping point where fewer-and-fewer people are able to afford to buy a house and the balance between renters and homeowners is changing.

“In somewhere like London it’s forecast that in a couple of years there will be more renters than homeowners,” he said. “And even those people that do own homes are realising that their children are never going to be able to own homes in the way that they do. 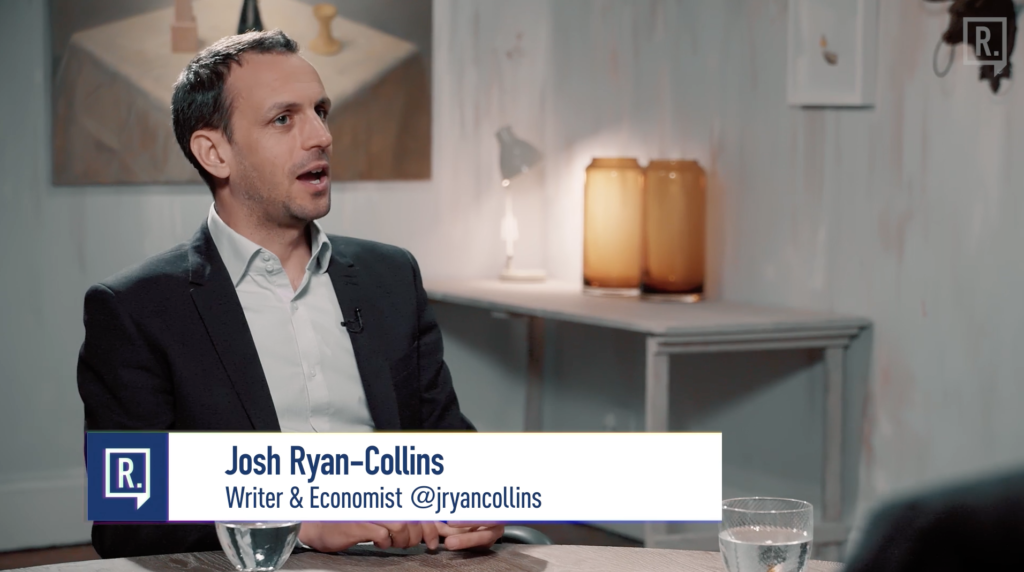 “Some of them think ‘if I’m lucky enough, I can just pass down the money through the generations’ but it’s increasingly recognised that that is unsustainable. So ultimately something has to change politically to avoid a crisis.

“What that change will be is difficult to say. We propose in the book a number of different options but the difficulty is it’s not just about people needing places to live. It’s about the wider economy. It’s about the fact that the whole of the UK and many other advanced economies are basically plugged into this feedback cycle between the value of property, housing propping up consumption, propping up the wider macro-economy, and propping up the banking sector as well. It’s not just a simple political issue. It’s a wider economic issue.”

Tune in to the latest episode of Renegade Inc to meet our other Renegades and figure out how to undo this neoliberal doctrine, what future economies should look like, vs what they will look like.