In Europe during the Middle Ages, feudalism was the social order of the day. Society was structured between landowners and the landless. Astonishingly, that social order is on the rise again in the UK.

A growing number of leasehold homeowners are at the mercy of a new class of rent-seeker – actively exploiting them in their own homes through onerous ground rents and permission fees. Many of these homes were bought through the government sanctioned Help To Buy scheme, which has fuelled house builder profits and led to massive remuneration packages for CEOs.

On this show, we uncover the sleight of hand behind this growing crisis.

Host Ross Ashcroft is joined by founder of the National Leasehold Campaign Katie Kendrick and Director of the Leasehold Knowledge Partnership Sebastian O’Kelly.

More than one in five privately owned houses in the UK is leasehold but often developers and their recommended conveyancing solicitors have been short on detail when selling these properties. This has resulted in a unsustainable ground rent that ratchets up year-on-year, leaving leaseholders with a massive bill and often an unsociable property.

Sebastian O’Kelly, Trustee of the Leasehold Knowledge Partnership described the leasehold partnerships as “a complete racket”.

“Everywhere else in the world, when you own a property, you own the entire building,” he told Renegade Inc. “I’ve owned flats in France and in Italy, me and my neigbours owned the entire building. We are responsible for it it all, the corridors, the roof, the drains. We owned it and we had to pay to maintain it. In England, that’s not the case.”

“If you breach that lease you’re in serious trouble. If you’re a litigant and you have to go to court, you’re in a position of extreme vulnerability Vis-à-vis your freeholder and any money dispute, which is why in any money dispute our advice is almost always pay up first and then fight. If you pay up first and you lose, you’re not in breach of lease and you’re not vulnerable to legal costs.”

“But if you withhold money you go to court and you lose, the whole barrage of legal costs can come down on top of you. And I’m afraid freeholders exploit this and arm up with the most expensive lawyers conceivable in order to get back relatively small amounts of money. I see about once a month a leaseholder car crash in the courts.”

Founder of the National leasehold campaign, Katie Kendrick bought a leasehold property in 2014 and fully intended to buy the freehold after two years when she was legally entitled to do so. But the freehold was quietly sold on before she had a chance to make the purchase.

“I didn’t realise what the impact of the onward sale of my freehold would be to me,” she told Renegade Inc. “They sold the freehold on without my knowledge because the right of first refusal does not apply to houses, only flats.”

“So they wrote to me after they sold my freehold on saying this is your new freeholder and these will be the people that will be collecting your ground rent and nothing else will change. Alarm bells didn’t really start ringing.

“They sold it on to a company called Adriatic Land 4 (GR1) Ltd, which is linked to the family of former Prime Minister David Cameron.”

“My ground rent is collected by a company called ‘Home Ground’. You can’t ring Home Ground, there’s no phone number for them. They don’t take incoming calls. The only way I can correspond with them is via email. And if you want to ask them any form a question, it’s £108.” 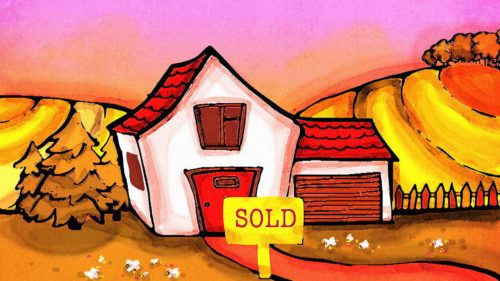 If Kendrick wanted to build a small conservatory which didn’t need planning permission, she still would have been required to pay a £2,600 permission fee.

“These fees were not identified when I bought house.”

Now that her freehold has been sold-on, the new freeholder quoted Kendrick £7,600 to buy it back.

“I never realised I was going to be funding somebody else’s long-term investment. As far as I was concerned my home should be my own investment and nobody else’s. If I had known what I know now about the whole leasehold scam there was no way anybody would enter into that. You know you’re just so vulnerable.”

Sebastian O’Kelly, Trustee of the Leasehold Knowledge Partnership described the leasehold partnerships as “a complete racket”.

“It’s unique to England and Wales,” he said. “We sell leasehold properties. Leasehold just means tenancy. It’s usually used for flats but developers have recognised what a successful racket this is and have spread it to houses and have now increasingly built these old houses up and down the country.”

Countries including Northern Ireland and Scotland, North America and most of Australasia have done away with leasehold properties, but England continues to wring dollars out of a structure it’s brought with it from the feudal era into the modern day.

O’Kelly notes “There is a historic legacy of leasehold houses and there’s more than a million of them in this country, most of those date back to the factory era.”

“But this new ways of creating new leasehold houses anywhere in the country even in current counties such as Somerset or Hampshire or Essex which have absolutely no tradition of leasehold houses whatsoever and no legacy of industrial era leasehold housing,” says O’Kelly. “It’s purely being done to steal profit from their own customers over the past few years. We have had a building boom fuelled by taxpayers in the form of the help-to-buy system. It has created vastly inflated share price values for house builders. It’s created enormous bonuses for the chief executives who head these companies and the bill has come back to the taxpayer. How on earth the government thinks that this is a good idea and good use of government money in an era of austerity, beggars belief.”

Perpetuating this form of tenancy makes an entire generation of people who buy these products incredibly vulnerable.  There’s a generational, state-sponsored swindle going on here because if you’re under the age of 35, chances are you are in the leasehold house or at least a leasehold flat.

“It can’t be right that an entire generation of homebuyers are excluded from the real benefits of homeownership but remain as a long-term tenant for somebody else,” says O’Kelly.

“Worse still in the case of Katy [Kendrick] who’s freeholder is this murky outfit called Adriatic Land, the ultimate beneficial owners of Adriatic Land hide their beneficial ownership behind nominee directors. What does that mean? It means that we don’t actually know who owns it and that applies in so much of British Property.”

More than 256 billion pounds worth of commercial and residential property are owned offshore and we do not know who the beneficial owners are.

“How can a healthy democracy function with that amount of tax avoidance?” says O’Kelly “If you can’t come forward as the beneficial owner of a property, my view is you should lose it.”

Kendrick says developers must be held accountable for actively deceiving people about what it is they thought they were buying.

“The developers are ultimately to blame,” she said. “They knew full well what they were trying to mis-sell us. It’s a fine line between acting legally and immorally and what they’ve done is completely immoral and they need to be held accountable. Hopefully, we’ll get them in front of the [Parlimentary] select committee because questions need to be asked you know. We’re just working class people we just want a fair deal. We’re hoping for big change because big change needs to happen.”

Sebastian says that without serious reform to property laws, England will end-up with millions of leasehold properties, mainly flats, where the people who thought they were buying property find out they actually have no control, and lose considerable proportions of their income to third-party owners.

“We will end up with millions of leasehold properties, mainly flats,” he said. “You will have people who own and speculate in the freeholds of those properties and who have the leaseholders more or less under their control.”

“You have a preponderance of power for a minimum investment as a freehold owner. You know your freehold might be worth a million quid, and a block of flats is worth 20 million quid, yet you make all the decisions.”

“We must not continue to perpetuate this. The result is massive wealth for the rich people that are paying for these leasehold properties, but they’re paying for something that is eroding in value over time. At the same time as ‘owning’ and occupying this flat you’re paying the ground rent income that could be carved up in such a way that it’s mining a considerable income out of you.”

Kendrick and O’Kelly are fighting for the abolition of freehold leases.

“Moving forward and we must completely abolish leasehold on houses,” Kendrick said.
“There’s absolutely no purpose for it at all. Flats needs to be a common-hold. It’s a much fairer system. But let’s not forget the one million houses alone that are caught up with these onerous leases that were completely mis -sold. We need a redress scheme.”

Renegade Inc. contacted Bellway and Taylor Wimpey for comment on this issue but they didn’t meet our deadline.

We also asked the Chairmen and/or CEOs of both businesses to appear on our programme.

They have not replied to our invitation. We will continue to request an interview.

Watch the full episode above to find out how to put an end to this exploitative property system.