Green washing and the psychology of climate change denial

Humans live in a bubble of self-delusion in which the perceived short-term imperatives of the market have been prioritised above the need for a sustainable planet.

Corporations and governments are cynically exploiting the space between public perception and scientific fact, lulling us into a false sense of security that climate change is a problem for the future, rather than an urgent that must be addressed in order for the species to secure its long-term future.

One of the key public relations strategies among the vested corporate interests that deny the scientific consensus on climate change, is to cynically exploit the space that exists between public perception and scientific fact, sometimes referred to as the “consensus gap.”

Cherry-picking & the fomenting of uncertainty

One of the ways corporate deniers set out to achieve this, is to deceive the public through media campaigns and lobbying strategies, questioning the validity of the science behind climate change. This involves the claim that it is contradictory, that scientists are split, environmentalists are charlatans, liars or lunatics and that if governments took action to prevent global warming, they would be endangering the global economy for no good reason.

The website Exxonsecrets.org, using data found in the company’s official documents, lists 124 organisations who have taken this approach while either taking money from Exxon or working loosely with those that have.

Another tactic is to cherry-pick evidence, cite fake experts, misrepresent findings and deflect arguments. The mass media also play a part in the deception by constantly amplifying the views of the tiny minority of climate scientists that argue man-made climate change is not happening, whilst ignoring and marginalising the vast majority of experts who say it is. 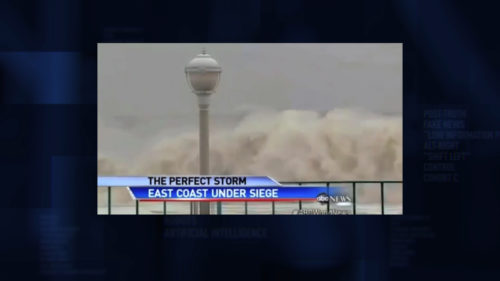 ‘Green washing’ is one of climate change deniers’ most effective public relations strategies, diverting public attention away from unethical environmental practices of the corporations, thereby legitimising decisions that would otherwise expose them to intense public scrutiny. Almost two decades ago, the the Transnational Resource and Action Centre was among the first to have exposed this strategy when it highlighted how carbon polluting corporations paid lip service to eliminating fossil fuels by using renewable energy investments to give themselves a ‘clean and green’ image.

Deniers have been ably assisted in this endeavor over the last decade not least as a result of the publicity to the cause that was generated by the world renowned ecologist, David Bellamy. In April, 2005, Bellamy claimed in a letter to New Scientist that “555 of all the 625 glaciers under observation have been growing since 1980.”

Monbiot then challenged Bellamy in a TV studio debate. During the extraordinary exchange, Monbiot revealed that Bellamy had reproduced falsified and fabricated data and accused the Botanist of committing scientific fraud.

The kinds of corporate denialism, deception and green washing outlined raises some interesting related psychological issues. Most people, if asked, would likely admit to being concerned about climate change and would accept that increasing the rate at which carbon dioxide and other greenhouse gases are released into the atmosphere changes the climate.

However, climate change barely features as an issue of concern during election periods. There appears to be a disconnect between how people feel about climate change and the extent to which it is at the forefront of their minds.

Environmentalist George Marshall says it is our ability to not pay attention to things that is fundamental to the way we operate.

He says there are different processes of the brain for processing information. One side of the brain deals with information and data – the rational side – and the other deals with what psychologists call ‘affective reasoning’ which dominates our decision-making, driven by cues, signals and above all, bias.

“The process of attention and dis-attention is extremely important to how we operate,
Marshall says.

“Increasingly, the research is suggesting that the process of dis-attention is more important to our functioning than attention.”

This latter process is particularly important in terms of how climate change is often perceived in terms of social signals. People have a tendency to conform to the views of their peer groups, which leads to confirmation bias.

In his book Thinking Fast and Slow, psychologist, Daniel Kahneman says humans are not only biased against the future but also cost-averse against a backdrop in which solutions to climate change involve huge financial expenses, evoking uncertainty, which he calls “a perfect combination of biases.”

What appears to emerge from Kahneman’s analysis is that attempts to tackle climate change have been deliberately set up to fail. Humans make excuses not to confront it because it’s perceived to be a problem that exists somewhere in the future, is open to interpretations of biases and is regarded as having a multitude of potential interpretive causes.

However, as real as the biases are to people, they only reflect a perception. They are not illustrative of reality. The truth is climate change is happening in the present and was happening in the past. Moreover, as Marshall argues, the cost issue is debatable, and with every scientific institution agreeing about man-made climate change, its certainties are unquestionable.

Ultimately, climate change is unlikely to be tackled because governments have never recognised, in any serious way, the need for it to be tackled.

Humans live in a bubble of self-delusion in which the perceived short-term imperatives of the market have been prioritised above the need for the existence of a sustainable planet to enable the species to secure its long-term future.

The penetration of the market into all our lives and forms of thinking, is indicative of a self-obsessed culture guided by narrow short-term economic interests which will almost certainly lead to catastrophic social and environmental costs.