I Wish I’d Been in That Meeting: The New Day

I wish I’d been in that meeting. The one where Trinity Mirror staff brainstormed the idea for a new kind of daily newspaper. That must have been quite a thing. A room full of newspaper execs and seasoned editorial staff, throwing out rulebooks and old fashioned thinking.  The result… A DAILY NEWSPAPER.

Its mission, as editor Allison Phillips argues, is to fill a gap in the market. “…this paper should give you in 40 pages everything on any given day in a 30-minute read, without being bombarded with content you don’t need.”

This is the first sign that The New Day is doomed. Let’s rephrase the editor’s words for clarity:

“…this paper should be cheap to produce, and use short form content to keep contributor fees down. It will summarise a range of stories you missed on Twitter/TV news yesterday but not the huge variety of free content that’s available online, regardless of age, gender or interests…”

She should have simply said “You damn kids and your internet, you’ve broken the news! Now give me 50p!”

Basically, The New Day’s business model is to get people to pay for news that is both abundant and free. Isn’t that the reason why newspapers are all going to the wall in the first place?

News, comment and opinion is free. It always was. What people bought from a newspaper was mostly distribution (because there was no internet or mobile devices) fact checking (because there was no internet of fact checkers) and expert opinions digested into a journalistic narrative (because there were no bloggers, company blogs, experts with twitter IDs etc. etc.). There was plenty of spin, misinformation and bullshit in the mix too, just like there is on the internet. And also, like the internet, pictures of boobs.

Some newspapers have held on, selling elements of the above supplemented by online ad revenues and bulk sales to airports, but it’s not a viable business model to enter the news marketplace with a paid-for, print-only retail daily publication. It’s commercial suicide.

Which makes The New Day look more like The Dawn of the Dead.

Night of the living dead…

Let’s consider the future of print for a moment, to explain why the New Day is staggering around demanding brains… and 50p.

In the mid-50s, my grandmother was beauty editor of Women’s World, and she won a nice swiss watch in the office christmas raffle. The brand, Angelus, was a very successful manufacturer back in those days but started to decline when Japanese quartz watches (digital timekeeping) arrived in the early 1970s.  By the time Angelus went bust in 1978, about two-thirds of the Swiss watchmaking industry had disappeared along with it.

The watch brands that survived the digital slaughter, like Rolex, emerged at a radically different point in the wristwatch value chain. In an age when you can buy (a more accurate) digital watch for under £5, who buys a £5000 stainless steel wristwatch because they need to tell the time? Nobody. The practical necessity of the stainless steel wind-up mechanical watch evolved into a new category of luxury product because the abundant, cheap digital technology of timekeeping redefined the value of traditional timekeeping instruments. And it’s a similar economic shift for print, abundant cheap information is redefining the value of traditional information market staples like paper and ink products.

It begs the question, the digital era, what is the print equivalent of a Rolex? That novel you fell in love with? A set of encyclopaedias? The complete works of Shakespeare? Printed words with longevity, bound in hardback, expensive to produce, with inbuilt scarcity value.

Newsprint can never achieve that kind of luxury form, it is, by design, disposable. It is an anachronism in a world of screens.

The New Day launched at half price (25p) ramping up to 50p in a couple of weeks. Early signs show it has shifted somewhere between 150,000 and 175,000 copies per day… at half price, although its launch edition shifted 4% more than the following day. It’s shy of a competitive 200,000 tabloid target, but comfortably over their estimated 100,000 per day break-even point.

Newspapers are increasingly being consumed as supplements to our primary news sources online, if they are consumed at all. The modern news consumer habit is to pick and choose from a multiplicity of sources. We are not bombarded by content we don’t need, what that statement really expresses is the disdain the old news media has for unruly consumers who demand a variety and choice that the old cash cows of TV and newsprint can’t afford to produce.

The unique selling point that will save The New Day is balance, apparently. As Editor Phillips explains  “Time and again the thing that comes up in research is a desire for balanced opinion.”

Pick through The New Day and you’ll realise what they mean by “balance” is ranging opposing viewpoints in equal column inches between 200-400 words. They might as well insist all columnists supply their arguments as bullet point lists. It is inherently unbalanced by virtue of it’s brevity. Not to mention the more esoteric point that a for-and-against editorial policy doesn’t present a balanced narrative, merely two viewpoints. This is akin to supplanting the narrative of a book with the jacket copy version or playing a soundbite in place of the full statement. It’s gentle, well-meaning dumbing down.

The New Day looks almost exactly like every other newspaper on sale, except with less depth. Is it the ghost of Eddie Shah’s Today? Or Maxwell’s European? It’s hard to know for sure. But there is one sense in which The New Day has captured the middle-class zeitgeist. It is the newspaper equivalent of a PowerPoint presentation.

Oh, I wish I’d been in that meeting. 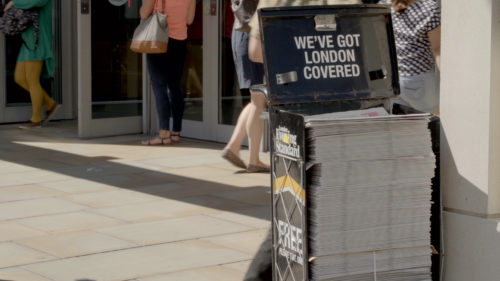