The Quiet Catastrophe: The Reinvention Of Book Publishing

In spite of the mergers and lay-offs and the high-profile disputes with Amazon, the publishing industry is growing — just not in the way it used to. Author John Birmingham reflects on why he made-the-switch to self-publishing.

My first year as a working writer I made a hundred and thirty-five dollars and ate a lot of generic poverty noodles. My second, a bumper year, I broke two hundred. It was encouraging, but not enough to upgrade to those fancy Maggi noodles the big, prize-winning authors get.

After a decade of freelancing, though, I’d made it. I could mostly pay my rent and buy any damn noodles I wanted, as long as I was happy to sleep under a pile of old hessian bags on a brown couch in a share house.

I didn’t go into writing expecting to make money, and it turned that my expectations were entirely realistic. Starving artist KPIs? Nailed ’em.

And then I wrote a book about living on brown couches in share houses — He Died With A Felafel In His Hand — and all of that changed, at least for a while.

The nineties and noughties were a golden age in publishing. Books, newspapers, magazines — they all made the sort of money that paid for long lunches which turned into late dinners with open tables and murderous bar bills, settled with somebody else’s corporate Amex in the first light of dawn the next day.

And then … it was over. Not for me, not straight away, but both industries in which I worked — publishing and media — were disrupted with extreme prejudice. The Great Recession starting in 2008 accelerated a structural collapse which had been underway since Mosaic rendered its first web page nearly fifteen years earlier. The sorrows of media have all been well traversed: the closing of venerable mastheads; the hundreds of thousands of laid-off journalists; the indignities of clickbait;the desperate raising of paywalls; the erosion of standards; the triumph of advertising over editorial; the shit-eating grins of the surviving management cadre as they tried to pretend everything was still totally golden.

But publishing was ok, right? Bookshelves are still full. Stephen King and J.K. Rowling could still fund their own small war in the Middle East if they wanted. And after a decade of chaos and collapse, independent bookstores are even coming back. What’s up with that?

Did the book industry pivot?

Did big publishers get smart?

Can we for God’s sake please get back to the business of long, Bacchanalian lunches again?

The mergers of enormous multinationals like Penguin and Random House, the investigation in the USA of the Big Five houses (Hachette, HarperCollins, Macmillan, Simon and Schuster, and the now-merged Penguin Random House) and Apple for colluding against book buyers, the crazy number of colouring-in books you’ve noticed the last two or three years — they’re all signs of an industry thrashing around in deep distress, if not actual death throes.

The last ten years have thrown up such a perfect storm for publishers that it can be difficult to tease out whether the collapse of a chain like Borders has more to do with the recession, the rise of gaming as an alternative to reading for children, the rise of streaming TV as an alternative to reading for adults, or simple predatory action by Amazon — also fondly known as the Beast of Bezos.

In the end it hardly matters, because the industry seems determined to remain in denial anyway. Its methods and patterns of thinking are rooted in the era of sailing ships and hand-stitched leather hardbacks. Publishers will dutifully speak at book fairs and conferences about the brave new world of data-driven business — but even as they merge and downsize and skate to where the puck was five minutes ago (colouring books!) their business remains rooted in the vagaries of instinct and gambler’s superstition.

Marketing plans for any title without the name of an international super-author to sell it don’t get much beyond throwing that month’s slate of new releases at the wall like a bowl of student spaghetti. If something sticks, that’s awesome — throw some more up there.

Yet publishing, like media, is being reborn in new forms, both refined and grotesque. The first sign that something weird was happening was the sudden appearance of Amazon best-seller lists dominated by unknown authors selling pulpy shockers, mostly for ninety-nine cents each. As giant chains and tiny independent bookshops all fell before the Beast of Bezos, these lists increased in importance.

Amazon, it turned out, was not a bookshop. It was a search engine for people with credit cards and low impulse control. It behaved accordingly — serving up whatever the algorithm thought a reader was most likely to buy, not what the critics at the New York Times or the London Review of Books thought they should be reading.

For the clubby, exclusive aristocrats of old-world publishing, this was a quiet catastrophe.

As margins were squeezed after 2008, publishing houses did what all businesses do: they cut costs. The super-authors still trousered multimillion-dollar advances, toured first class and swam laps of an in-house plunge pool at Penguin Random House that was filled with vintage Kristall. Lesser authors were cut. Editors, designers, and production staff were sacked.

Nathan Farrugia (pictured below), a trade-published author turned indie, points out that while cutting the midlist and outsourcing the talent solved a short-term crisis, it placed publishers in a dangerous position: betting the farm on their mega-selling authors, many of whom are well beyond retirement age, while having no midlist to replace them.

Fellow writer Steve P. Vincent warns authors at the start of their careers that if they sign on with one of the big publishers, they won’t have time to “develop, grow a readership and attain profitability”.

The new model is hit fast or perish.

“Those authors have given up or started to self-publish,” Vincent told Which-50. “The better ones are putting out work that is as well-produced and well-edited as the big houses, except they’re fronting the cost.”

Vincent and Farrugia, like many successful indie writers, have thrown themselves into the data-driven world of directly selling to their readership using the marketing tools of online commerce: mailing lists, metadata and social advertising. They’ve also been able to access the sort of expertise that was once locked up inside companies like Pan Macmillan, Hachette, and HarperCollins.

All those outsourced cover designers, typesetters and editors had to go somewhere. By shedding them from their payrolls the Big Five set them loose in the market.

In spite of the mergers and lay-offs and the high-profile disputes with Amazon, the publishing industry is growing — just not in the way it used to.

Growth used to mean the emergence of a new franchise — a Harry Potter or a Twilight — to capture a new generation of customers.

The new growth in publishing is explosive, but invisible. It’s thousands of authors making solid middle-class incomes for themselves as independent digital publishers. It’s collectives of those same authors banding together to create virtual publishing houses. It’s Publishing-as-a-Service — the business model of fast-growing start ups like reedsy.com, which provides a clearing house for the best editorial, production and marketing talent the Big Five cast out after 2008. It’s even small independent publishers using the methods of indie authors to grow their own business.

An industry observer who calls himself Data Guy releases quarterly deep-dives into the industry at authorearnings.com. Scraping Amazon and the other online sources, Data Guy has found that indie authors are capturing between 30 and 40 per cent of the global ebook market, while small- to medium-sized publishers account for another 20 per cent. The Big Five have allowed themselves to be squeezed out of the ebook market — they can lay claim to only 38 per cent of global sakes.

Joel Naoum, a former Big Five publisher who has gone indie himself at Critical Mass Consulting (critmassconsulting.com), predicts “atomisation rather than destruction” of the industry over the next ten years.

“More and more fiction will get chipped away from traditional publishing until only the biggest fiction brands are published by the big publishers and the vast majority of genre fiction is published by small presses and indies,” he says.

“The big brands will get even bigger, and the rest of the market will be massive, but very spread out. Traditional publishers will focus on what works in print and will probably continue to work in print for some time — gift books, celebrity bios, lifestyle, health and wellness, illustrated and children’s books.”

And when their current list of superstar fiction writers die out or retire? Then they’ll have to replenish them from the emerging superstars of self-publishing.

The problem? Those superstars — who have sold millions of ebooks on their own — are not necessarily going to leap at the offer of a ten per cent royalty when they’ve been getting 70 per cent from Jeff Bezos and Tim Cook.

Nor are they likely to be impressed with the digital marketing chops of trade publishers who have neither the resources nor the inclination to do the sort of micromanagement of Amazon’s algorithm that is the secret of indie publishing success.

Mark Dawson, one of those indie superstars, recently shared a Facebook advert by Hachette UK that was targeting people over 35 who liked “online shopping”.

That was the extent of the big publisher’s targeting effort.

At least when they used to throw spaghetti at the wall there was a chance that some of it would hit.

My own spaghetti-wall-fail moment came about two years ago, when my then-publisher released a book on Christmas Eve, without much in the way of publicity, and out of sync with my US and UK publishers who were scheduled to release in April. It was, predictably, a disaster.

Long story short, I had no choice but to switch to a hybrid model — releasing some titles with my US publisher (Penguin Random House) but moving hard and fast into self-publishing too.

It was a revelation. Transparency, responsiveness, and predictable income flows — none of which are features of the old model — are all standard for self-publishing.

I’ll stay with trade publishing for print for as long as they’ll have me, but my writing future lies with disruption. And it looks a lot better than it did at Christmas two years ago.

This post was originally published on Which 50 and reproduced with the permission of the author and editor. 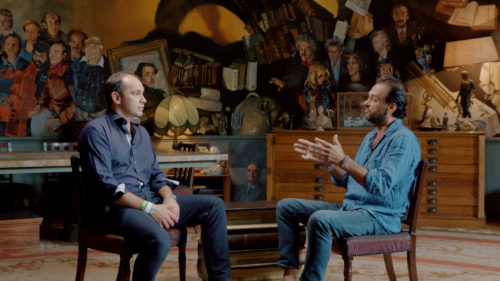