While some of us are pretty conscious of the importance of using the correct terminology when it comes to issues of social justice, race, gender and sexuality, when it comes to addressing inequality, we are still using language straight out of the neoliberal handbook.

We need to be honest about how the tax system works and what it is for. To do so isn’t radical, or even progressive. It is simply the economics of reality.

In countries whose governments issue their own currencies, taxes do not pay for federal services.

Governments like those of the US, UK, China, Australia, Canada, etc run spend & tax economies, not tax and spend. 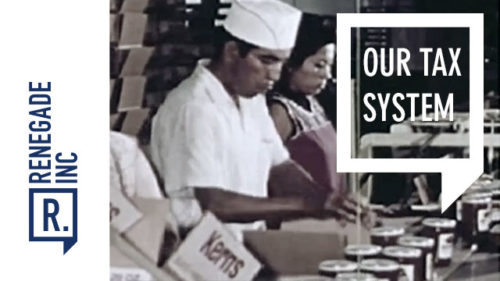 There are some exceptions here which are important to underline: Taxes pay for services at state and local levels, but that is only because they are themselves inadequately funded by federal governments and therefore raising taxes becomes necessary to make up the revenue shortfall. Taxes also nominally pay for spending in countries whose governments adopt foreign currencies (most EU member states, for example), or peg their gold to a foreign currency.

So why pay tax at all?

Taxes are important. Just not for the reasons that are often talked about.

Taxes exist for a number of reasons:

– To maintain the value of the currency.

– To manage growth and distribute wealth and, depending on what you think government is for and who it exists to serve, ensure prosperity and equality of opportunity for their constituents.

– To discourage bad behaviours (taxation on cigarettes, for example, are designed to discourage smoking and reduce the burden on health systems) & encourage good behaviours, (like promoting sustainability through a tax on carbon and investment in renewable energy).

As economist, Professor Randall Wray recently pointed out: Governments do not need a single dime from the wealthy to address inequality. That is not how taxes operate, or what they are for.

“Rather, government spending directed to those who ‘have too little’ is what gives the poor access to resources. (They can use their demand deposit credits to buy food, clothing and shelter, etc). They are functionally two separate entities.

“Government can spend to help the poor without taxing the rich or anyone else.”

Buying into the myth

Nonetheless, the idea that taxes pay for government spending persists as an inaccurate bipartisan consensus, one of the greatest collective myths of modern capitalism.

When you hear politicians or pundits squawking about workers’ hard-earned tax dollars paying for this or that, you can almost certainly guarantee they have no idea about how taxes work either.

Our acceptance of this lie is, to quote anthropologist David Graeber, “collectively acquiescing to our own enslavement.” The continuation of the status-quo depends upon the public’s ignorance or blind consensus as to the true nature of banking, finance, government spending, job creation and the nature of work itself.

The very myth that the vast majority of us have settled on is the very thing preventing full and gainful employment, and guarantees a future (and a present) where the only way to buy our way out of public squalor is through rising private debt.

In his recent book, Bullshit Jobs, Graeber describes modern day capitalism as a system of ‘Managerial Feudalism’, a form of social and political control achieved through corporate bureaucracy: the proliferation of middle-managers, supervisors, administrators all employed to ‘appropriate labor through usury’, stealing wealth, resources, opportunity and power from the working and middle class and transferring ownership to the political and elite classes and the idle rich.

“Marx appears to have been right when he argued that ‘a reserve army of unemployed’ has to exist in order for capitalism to work the way it’s supposed to,” he writes.

“…we are identifying with our rulers when, in fact, we’re the one’s being ruled.”

To truly address inequality and abolish austerity politics, we must start being honest about how taxation works and what it is for.

Language is important. You can be as woke as you like about gender and racial politics, but using the wrong terminology for taxation is kryptonite for social justice. We cannot subvert the neoliberal playbook while continuing to use the very same language invented to ensure a permanent economy of inequality and austerity.