It has long been the plan to dismantle the NHS and sell great swathes of it into private hands. The profits that can be made from health care are staggering. Just ask the Americans. So have British politicians, lobbyists and corporate interests used the pandemic to speed up the steady creep towards a US-style pay to play health care system that puts profits above patients’ interests?

The war is not over

For many years, Dr. Bob Gill has campaigned tirelessly to stop the break-up and steady creeping privatisation of one of Britain’s greatest social achievements, the NHS. Sadly, as successive legislation’s put before parliament testify, it’s a battle the NHS doctor appears to be losing. However, as we shall see, the war is far from over.

In his documentary film, The Great NHS Heist, Gill points out that American health insurers have long been a feature of the NHS. Since 2003, for example, UnitedHealth Group, through its subsidiary, Optum, has been awarded NHS contracts across England to implement policy to redesign the NHS. UnitedHealth is ideally positioned to capture control of NHS budgets allocated to GP’s via their registered patient lists.

Most doctors remain unaware of the privatisation plan for the NHS, which remarkably is fully endorsed by the British Medical Association. Under the behest of Simon Stevens, the long-term plan for the NHS, is to complete the transition to the American system. The Health and Social Care Bill, which is is due to go to the Lords early next year, has this aim in mind.

The Bill represents the final stage of a corporate grab which has already resulted in the transfer of NHS assets to the private sector and the erosion of workforce contracts. The Bill will set in motion the loss of budgetary control and pave the way for an American predatory system called Medicare Advantage which is strategically positioned to replicate the UnitedHealth insurance-based business model throughout Britain.

How will it work?

Gill explains that there are two main mechanisms to how this post-Brexit Americanization of the NHS will work. One, is the establishment of a financial threshold as the basis for obtaining insurance. The second process is the termination of policies and the denial of care for expensive treatments. This will be justified on either thresholds being exceeded or on the basis of insurance companies finding reasons to avoid meeting the cost of medically necessary treatments for policy-holders.

Essentially, the proposed system will open the door for rapacious firms and government service providers, enabling them to amass enormous private profits at the public’s expense.

As Gill explains, this is an anathema to the notion of an efficient market:

“The model is endemically fraudulent, has massive overheads in terms of cost of administration, extracting shareholder value and paying CEOs. The public will end up paying twice, either through taxation or individually through top-up insurance.”

This kind of a profit-driven system is unable to cope in situations where surplus capacity and preventative care are needed, for example, during a pandemic. Gill cites a Royal College of Emergency Medicine report highlighting the lack of beds as the cause for overcrowding which has resulted in 4,500 preventable deaths.

“We’ve lost 20,000 beds since 2010. So people are waiting in the backs of ambulances, not getting the care and supervision they need. There are people waiting at home seriously sick, not getting transported to hospital, where acute, life saving care, can be provided. So what happens in those circumstances is people die.”

‘Modernization’ and ‘reforms’, emphasized, for example, in the 2012 Health and Social Care Act are, in reality, euphemisms for a deliberate drive to undermine universal health care provision and reduce outcomes for people.

It is within this context that the paradox of the system is not only laid bare, but it is also embedded in a US-replicated ideological model that vast swathes of British people are not yet aware of.

“The problem we have is getting across to the public that our government is willfully causing preventable harm and death in order to get a political agenda across. People have a psychological block. We are trusting of our leaders because there’s an evolutionary advantage to trust what our leaders say.”

It is not without reason that economist, Mary Wrenn, described the American health care system where people are often forced to sell their homes, spend their life savings or raise gofundme pages to fund treatments, as “barbaric“. British people hearing that recoil, which is exactly why politicians and their media lackeys have been very stealthy and secretive about what they’re doing.

This has been particularly evident during the last two years, where had the NHS been more robust and been properly funded, much of impacts of COVID could have been prevented. Former Chief Scientific Officer for the country, Sir David King, for example, estimated 100,000 preventable deaths as a result of the government’s catastrophic handling of the crisis.

Open to the market

In echoing, what was previously said above, Gill’s point is that the government is incapable of doing the right thing because they are ideologically wedded to throwing everything open to the market.

“We are ending up in a country where the public subsidise corporate profits through taxation. It’s an easy income stream for these corporations and we have less scrutiny over what they’re doing. We have politicians with financial interests in these companies. So they are not interested in doing the right thing for the population”, says Gill.

One of the beneficiaries of the cronyism and corruption in terms of the vaccine roll-out is Big Pharma. There is a substantial amount of evidence that financial contracts were awarded to friends and contacts of the Conservative party which has dictated many of the governments policies and actions.

“Under these circumstances”, says Gill, “you can understand when people start to mistrust policy. We were told the vaccine would be very successful. Now we’re being told we need a booster dose. Is the booster dose being recommended on science or is it recommended to boost corporate profits?” 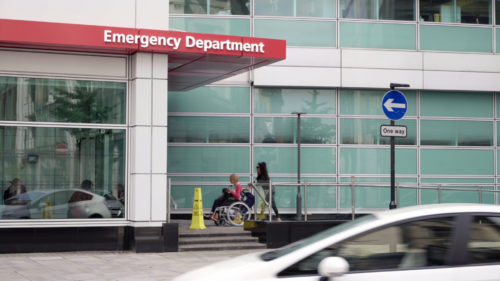 Death by a Thousand Cuts

In terms of solutions, Gill argues that what is now required is a public information job. When the public have this knowledge, then they can start by pushing their elected officials and civic organisations into a position to take action to avoid American health care barbarism.

Gill says that trade union members need to look at what they are doing. He also says that people need to participate on social media and national radio debating platforms to ensure that the constant propaganda nudging us towards accepting this horrendous American model is challenged.

Gill is optimistic that the journey towards public awareness of the issues is being strengthened, paradoxically, as a result of the governments handling of COVID and their blatant corruption in handing out contracts:

“The public are more receptive to hearing our analysis of what’s really going on. They can see the pressures within the hospitals and on GP services for themselves. We know, not only in this country, but abroad, that people are more questioning of authority in terms of mandating vaccines. Logically speaking, these are not rational things to do on the back of the pandemic with a leaky vaccine.”