We often hear the words, ‘capitalism has failed’.

But when you really think about it, capitalism has worked perfectly according to the rules it was created upon. Within the rules and DNA, is a system that uses oppression and revenge to maintain control.

Author and Teacher, Dr. Max Haiven, explained to host, Ross Ashcroft, that until we understand the mechanism of this process and begin telling a different story, the retribution will continue unabated.

The basic argument Max Haiven makes in his latest book, Revenge Capitalism, is that the system of capitalism is taking needless revenge on humanity. This is embodied in revenge politics, revenge culture and other forms of economic revenge. Haiven outlines the rise of reactionary politics and how capitalism has come to act irrationally, in spite of the fact that we’ve been told it’s a perfectly rational system.

The author argues that the public have been trained and habituated to think about revenge both in terms of Hollywood narratives and through thousands of years of human culture, literature and stories from around the world.

“Part of my argument”, says Haiven, “is that we have to rethink what we mean by revenge. We need to think of capitalism, not as a person, but a system that’s taking a kind of revenge on humanity. You can look, for example, at what’s happening to refugees around the world who are simply left to die as a kind of weird revenge that the system takes without humanity having ever really done anything to deserve it.“

The cognitive dissonance outlined by Haiven is actually bound up with how capitalism works. If we think about the system as a set of actions and reactions, then it becomes clear that it works perfectly on its own terms according to its own logic.

Capitalism has been able to continue on its destructive path because the public have been encouraged to focus on a set of Hollywood-style narratives reiterated in mainstream news media as opposed to having been taught to see systems and structures that give rise to them. In this regard, people tend to look for simplistic and individualistic solutions to complex problems.

Haiven argues that this conundrum is hard to reconcile because he says people are caught up in an exploitative, alienated workaday world where its very difficult for them to think outside of this narrow ‘dog eat dog’ perspective and to imagine that, through collaborative means, another world is possible.

The underlying narrative that runs through the book, is that capitalism, as a system, is inherently prone to sow the seeds of its own destruction as a result of the economic competitive logic at its heart, even though this eventuality is detrimental to the interests of individual capitalists themselves.

This contradictory system of self-destruction has become embodied over time through processes of revenge enacted against the powerless for no other reason than for the capitalist class to maintain and extend their power. Haiven cites the mixed messaging of corporate CEOs in response to the climate crisis as an example of how the contradictions inherent in capitalism play out.

Nevertheless, the notion that the system provides individual capitalists with a ‘get out clause’ is a terrible dynamic. It is a perspective that Haiven views as being addressed as a result of CEOs recognizing that they have both a personal and collective responsibility to reorganize social life and rethink what it means to be human on a finite planet.

“We all have a responsibility”, says Haiven, “to learn and to think about what it means to be human and what it means to work with others. But there’s another level where we have to build different kinds of community. Because ultimately, what changes people’s behaviour is what their friends, family and people around them think, and the reinforcement that they get from interacting with people.”

What we are witnessing now, particularly in the West or developed economies, is the ostracizing of people who think differently and are brave enough to reject the traditional political battles of the Social Democrat and Labour parties.

The economist, Guy Standing, describes this group as emancipatory characters within the precariat who are not necessarily victims but are nevertheless widely characterized as people to be pitied and, are therefore, widely held in contempt. Under such circumstances, it is difficult to envisage how a new broad-based anti-capitalist dynamic of activists could be re-imagined in sufficient numbers.

Encouragingly, though, Haiven says that an awakening, especially among young people who are using creative and cooperative ways of working together to challenge the survival of the fittest, ‘dog eat dog’ narrative, is already widespread and growing.

The author says that young people are increasingly realizing that the atomizing capitalist system, that’s resulting in mental health problems and other negative social indicators, is not benefiting them in any way. They also understand that addressing the catastrophic impacts of climate change, for example, requires collective action and that mindless consumption associated with the ‘American Dream’, is truly over.

But Haiven remarks that the flip side of a transitioning generational precariat that for many years have been hollowed out of the system as a result of the impacts of flat-lining wages and rising prices, is the rising of tensions. With a growing sense that the new proletarianized middle class have nothing to lose, the danger is that this cohort could resort to the pitchfork.

In citing the writings of Jamaican theorist, Sylvia Wynter, Haiven says what is ultimately needed to avoid this eventuality, is a change in the narrative and the story of what it is to be human. Only then can old and young alike change themselves and society:

“Wynter talks about the way that during over five hundred years of capitalism’s history, we’ve been instructed to emulate the dog eat dog rational man. And that this was always based on erasing other ways of being human that were being practiced by non-Western civilizations, indigenous people, even by Europeans before the kind of enclosures, the birth of capitalism and the separation of people from their land. So underneath that, I think there are incredible stories that not only we can learn from history and from what people are doing now, but that are underneath the fabric of reality if we just choose to lift the rug, so to speak.”

“Ultimately, most of the profound experiences in our lives have nothing to do with the capitalist economy. They have to do with friends, family, art, literature, sport and all the sorts of things that people do that don’t necessarily have an economic motivation, but that are the real fabric of life. So it’s sort of right there hidden in plain sight. But perhaps more pragmatically, I think that we can look to a variety of struggles and how people organize together in new ways. We’re in a world of uprisings that are rooted in the way that people are reinventing what it means to live together and to be human.’ 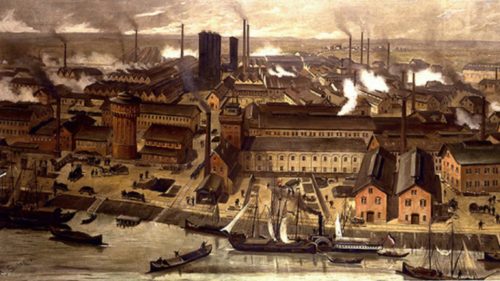 The kind of societal re-imagining outlined above contrasts vividly with Haiven’s reference in the book to colonial oppression. One of the things the author looked at was the way that colonial regimes used revenge as a means to police those over whom they had power. Haiven notes that the British Empire, for instance, had various ways in which they punished people and took revenge on them for affronts to British honour. The Opium Wars and the invasion and destruction of many different kingdoms in Africa started this way.

The entire policy of colonialism was either vengeful or atrocities were erased. The author refers to this as “vindictive normal”, a normalized system of revenge that few people acknowledge. And yet this was the bedrock of what was going on before.

Haiven says that the vindictive ‘Old Normal’ is the continuation of a neoliberal capitalist system that we know is destroying the planet, making most people miserable and some people very rich.

For Haven, the template will need to be premised on a practical reinvention of humans working in solidarity with one another in which all of the wealth produced is used to sustain the Earth and its people, rather than a very small handful at the top.

Haiven doesn’t proclaim to have a magic wand to ensure this happens. But he does emphasize that an important first step would be to withdraw our participation in the market and to find different ways of provisioning the likes of housing, food, entertainment and education. With regard to people forming community gardens, squatting housing or engaging in different democratic and collective processes, the author says this is already happening.