A Modern Greek Tragedy: A Warning to Others?

Looking at the terms of the Greek bailout one thing is abundantly clear: this is not only a heartless deal, but a brainless one as well. The IMF – no tooth fairy themselves, as the Nigerian Seun Kuti’s song IMF makes clear – have signaled that they think the current Greek debt will never be repaid and would benefit from a partial write off, along with some ‘reforms’ that would see pensions slashed further and the retirement age pushed upwards. Sadly this program, austere in of itself, is not sufficient for those within the German Government and the EU who will accept no suggestion of a debt write off whatsoever.

What all parties within the troika (ECB, IMF and EC) do agree on is that with the Euro straightjacket preventing Greece from devaluing its currency, the only avenue is ‘internal devaluation’. Internal devaluation is a clinical term for the destruction of workers’ rights, pay and conditions in order to make the Greek economy more attractive to international capital. The problem with this line of thinking is previous reforms have not had that effect, in fact they have limited the very growth that Greece needs in order to ever be able to pay off its obligations. The Einstein quote about insanity as “doing the same thing over and over again and expecting different results” comes to mind.

But perhaps the reason for this counterintuitive punishment of the Greek people does not rely on knowledge of economics, but history. The public defenestration of Greece’s popular finance minister and the open attack on the Greek people’s twice expressed will to try a different path to resolve their debt crisis conjures up memories of the military strategy of Vlad Tepes. When Vlad’s enemies stormed his capital of Târgoviște he would display the heads of his conquered foes on spikes. This brutal policy was intended to send a message to others seeking to raid the territory Vlad ruled with an iron fist. In 1462 it worked when Mehmed II halted his advance upon seeing 20’000 impaled bodies. Today it is Yanis Varoufakis’ head on a spike, to warn others of the consequences of disobeying EU rule by suggesting something as untoward as a referendum to let their people decide on their fate. It is fitting that the man who inspired the legend of Dracula seemingly also inspires those that are sucking the blood from the Greek economy today.

The fear in EU circles of Syriza’s symbol of hope spreading across the continent is understandable. When the news broke that Syriza had won the Greek election and would be leading a new government, a wave of optimism emerged throughout Europe that a new way was possible. What began in the Peloponnese peninsula spread to Iberia as Podemos emerged as a powerful player in Spain, another country in the grip of austerity politics. Left-wing mayors stormed the recent elections with Madrid electing a Communist former-judge, Barcelona an anti-evictions activist and Valencia a progressive teacher. Even in our own cold and conservative isles Jeremy Corbyn is running for the Labour leadership on a platform of opposing austerity, and his chances of winning seem to be getting better by the day. These rumblings of discontent with the neo-liberal order are not a unified movement, some want a better capitalism, some want an alternative to capitalism, but they all believe in the old slogan, ‘Another World is Possible’.

For those holding the reigns of power in Europe this clearly represented a movement that must be stopped as soon as possible, and what better way to stop it than to humiliate the party that started this agitation against the status quo?

And there can be no doubt that this is a total humiliation for Alexis Tispras, who was elected on a platform of opposing the very deal he has forced through the Greek parliament, against the wishes of many in his own party. On the streets the jubilant scenes that greeted Syriza’s victory in the elections, and the “OXI” vote on the Greek referendum, have turned sour, with protesters tear gassed by police. Hope burns in the fires of Hellen.

Whilst this would be an unedifying spectacle in any country, to see it take place in the fabled “birthplace of democracy” is bitterly ironic. It is, however, a long way from being without precedent. In 1944 Hitler’s troops that had been occupying the country for three years began to withdraw and the left-wing partisans that had been battling the Fuhrer’s army during the occupation began to move towards Athens. As recounted in Ed Vulliamy and Helena Smith’s outstanding Guardian article, Winston Churchill became worried at the prospect of the partisans forming their own government so gave orders for British troops to turn against their former allies in National Liberation Front. Vulliamy and Smith even go as far as to allege that Britain worked alongside Nazi-collaborators to suppress the feared leftist uprising. The actions of the Allies that year allowed the Greek right to remain strong, a position they would retain during the Greek civil war, the Regime of the Colonels, and today under the banner of Golden Dawn. When you see Tsipras, a man with all the power of a marionette, remember this is not the first time powers outside Greece have used their might to squash the will of the Greek people and use that ancient land for their own ends.

But the people attacking Greek freedom today do not wield guns, this was a coup by banks not tanks. To find a closer historical precedent it is necessary to travel to the South Africa of 1990, as Nelson Mandela was released from prison a new country seemed possible. Mandela’s African National Congress had spent the Apartheid years not just fighting white rule, but also putting together a vision for the country they would run when they were successful. The dream that kept those fighters motivated during the grueling campaign was based on full employment, nationalisation of key industry, and a broad, redistributive economic agenda to empower black South Africans financially as well as politically. It was only after their victory that the dream turned sour, the Apartheid regime had run up large debts and the costs of servicing these debts meant plans to advance a democratic socialist vision were shelved. With wealthier whites leaving the country and taking their capital with them, black South Africans were left picking up the bar tab for a party they had never been invited to. Like Syriza, the ANC now stand as a formerly radical party, in power but without power, rubber stamping decisions made my money men who know that by owning debt they own the country and the populace.

That is now the fate of poor Greece, decimated by the troika’s demands that it meet the needs not of its people but of international financial capital. That is also the threat being made against anyone in the Eurozone that dares to even think differently or to envision a better means of living. The EU has not just attacked democracy, it has attacked imagination.

James is a Renegade Inc. contributor 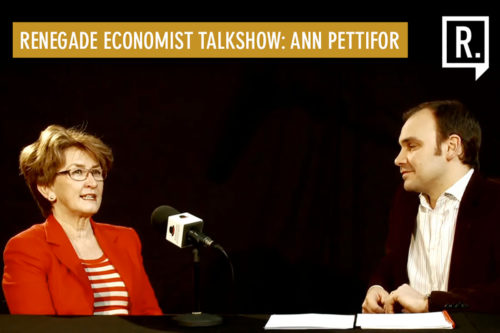