Our version of capitalism is something that the narcissistic writer, Ayn Rand, would adore.

But in a headlong rush to hyper individualism, have we chosen freedom of the individual over survival of our species?

Renegade Inc. host, Ross Ashroft, met up with friend of the show, professor Steve Keen to discuss why the Corona virus has closed capitalism.

Cost of everything & the value of nothing

According to professor Keen, the Corona virus is the trigger which shows us that capitalism knows the cost of everything but doesn’t understand true value. It is a system that, unconstrained, cannot find a solution to every problem and so during periods of extreme crisis needs the interventions of the state. “In this situation”, says Keen, “you cannot ask people to pay for things. In fact, we should be paying for them to go and have tests.”

In the longer term, this strategy will help save capitalism from itself. But can the economy cope with the current complacent ad hoc approach of a UK government who are opposed in principle to the nationalized ethos of the NHS? It is a government which appears to believe that they can ride out the Corona virus crisis with minimal state intervention. Steve Keen rejects this on the basis that capitalism is fragile and that the vast majority of people haven’t the financial means to sustain a big economic hit.

These systemic limitations highlight the perils of economic hyper connectivity both in terms of a crisis of liquidity and production. In this sense, the current morass is more severe than the 2008 crash which was restricted to problems relating to the former. In this crisis, output could be potentially hit because the spread of the Corona virus might shut down entire factories.

“This is completely different to 2008. Anything even remotely resembling a parallel to that is a world war”, says Keen.

Early detection, free testing, access to anti-virals and vaccines are all crucial elements to eradicating disease. But these kinds of interventions run counter to a free market system in which, for example, pharmaceutical companies sell medicines they manufacture at huge profits and private hospitals rent beds to the NHS. This profit driven ideology is also central to a decade-long austerity programme which has undermined the ability of the NHS to deal with the kind of pandemic we are now faced with.

“We would probably have at least 25 percent more intensive care units than it currently has. We’ve lost the capacity to cope with a systemic event and now we have a systemic event. It’s the perfect storm in terms of a disease which is both extremely infectious and just virulent enough to not change all that much over time.”

In economic terms, austerity is seen by free market ideologues as a way to boost profits which are deemed to be undermined by the concept of globalization in retreat. The problem is in order to create efficient supply chains you need the requisite input buffers to support them. But the handlers of ‘just in time’ input stocks are not averse to the Corona virus. Consequently, this will increasingly result in negative knock-on effects in terms of supply chains.

Commonly depicted as an anti-fragile system, the Corona virus epidemic has actually exposed capitalism as highly susceptible to shocks. Its modern manifestation is totally the opposite of resilience and is incapable of allocating resources within society efficiently. Arguably, it is a system suitable for what William Baumol once called the cowboy economy in which vast open spaces exist in order for capitalists to expand and externalize their costs.

However, the public sphere has now become confined by the systems own internal contradictions.

We are metaphorically and literally dumping stuff in our own backyard because we have run out of available space.

The Corona virus epidemic that underpins a discredited financial system is one of the most tragic manifestations of that.

“What caused the financial crisis”, says Keen, “was an explosion in private debt that went from 55 percent of GDP under Maggie Thatcher in 1982 to 198 percent under Blair in 2010 or thereabouts and is now down 170 per cent. It’s three times the level of debt before the bubble began, two and a half times what the maximum was for the UK before deregulation.”

The incredible fragility of a debt-driven and over-inflated market system have made it far less resilient to the Corona virus than it would otherwise have had. This has been exacerbated since the 2008 crisis by quantitative easing which has created the second highest bubble in history. The impending crash is likely to be far more severe than in 2008 because it encompasses human capital as well as the financial aspect.

The outsourcing of supply chains and their lack of security is likely to expose us to the Corona virus epidemic in the absence of any corresponding attack by way of the type of localised capitalism that existed before the fetish for globalisation. Keen agrees with Barry Eichengreen when he says the nation state has fundamentally lost control of its destiny, having surrendered it to an anonymous global force.

“Capitalism can’t survive this crisis. We have to effectively quarantine everybody. And you can’t have a quarantine capitalism. It has to be connected. So this is where the state has to take over in the same way that it did during the Second World War”, says Keen. 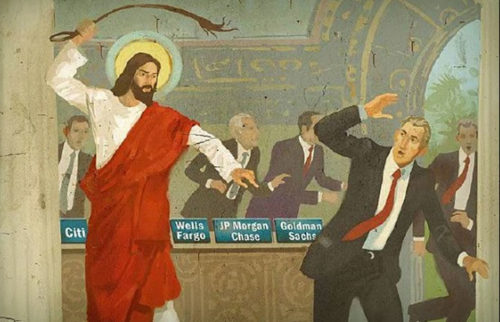 The system has to be reconfigured in a way that ensures the financial industry is in service to human life. “We could do what Frances Coppola calls quantitative easing for the people, where the state’s capacity to create money is used to give people cash while they’re not working or while they’re quarantined”, says Keen.

“We will lose the human and physical resources unless we provide an alternative means to create money to the credit system. If we actually try to do this in a market based system, banks will fail. People who expect to be paid mortgages will fail. The mortgages themselves will fail. The whole thing will break down and capitalism will be closed for business permanently rather than temporarily.”