Grenfell: woven into the fabric of the UK

The voting through of the bill into law has led to soaring rents, meaning that ordinary people have found it increasingly difficult to afford to live in the capital city.

There is a serious conflict of interest issue going on…

Government funds for housing associations are drying up. The supply of social housing is being reduced year-on-year as local authorities and housing associations are effectively being forced to sell more of their properties to the private sector to make money. The profits gained are then reinvested into their businesses reducing the overall availability of affordable housing stock which represents part of a broader trend: 120,000 were lost between 2012 and 2016 alone, with many converted into ‘affordable’ homes marketed at higher rents which are charged at up to 80% of market value. 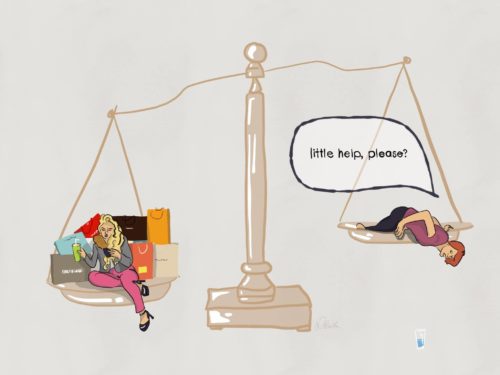 Seventeen months before fire engulfed Grenfell Tower in west London on 14 June last year killing at least 72 people, former Tory Prime Minister, David Cameron announced in the media his intention to demolish some of England’s worst council estates and “rebuild houses people feel they can have a future in”. What motivated Cameron was not a genuine desire to improve the quality of life for ordinary people, but to help sustain the fractional reserve banking racket and to perpetuate asset bubbles.

Cameron’s announcement was made two days in advance of a Commons vote on the Housing and Planning Act. The legislation compels local authorities to sell ‘high value’ housing, either by transferring public housing into private hands or giving the land it sits on to property developers.

What continues to drive the Conservative governments housing policy post-Grenfell, in other words, is not to put an end to the ideology that led to the fire, nor to end the crisis in housing more widely, but rather to bolster the investment opportunities of investors which will make an existing housing supply crisis worse.

Mass council house building is the most effective way to house people but this undermines the profits of private firms who invariably hold onto land rather than developing it, so that prices are pushed even higher. As prices within the private rental market soar, more firms are trying to get their hands on the profits generated.

According to research from Paragon PLC, the private rented sector (PRS) “is the second largest housing tenure, accounting for one-in-five homes in England alone, overtaking the social rented sector for the first time since the 1960s. This represents a significant increase in the number of households living in private rented homes.” The report added, the PRS has “more than doubled since 2001 and is now the second largest housing tenure…PRS is now home to 4.9 million households.”

Resulting from the impact of fractional reserve banking practices, the huge growth in privately rented homes is creating asset bubbles. An illustration of this has been the exponential growth in the construction of new tower blocks throughout London and other major cities. These are not intended for local residents to live in, rather they are being built for foreign investment funds and billionaires to buy as financial safe havens.

However, investment opportunities for large investors are undermined following any attempts by the government to increase supply which also adversely affect the property investment portfolios of politicians.

It’s in the joint interests of MPs and major property developers who lobby on their behalf to continue to deregulate the housing market and to loosen planning controls.

The impact of lax planning, greater deregulation and the lack of availability of affordable housing has been devastating to the poor and those on middle incomes. The graph below shows the number of families with children who effectively have been socially cleansed from London each year since 2010/11 (Source: Dan Hancox):

As the pressure for social housing in major cities like London becomes increasingly acute, it is no surprise that this is resulting in an increase in rough sleepers. As a consequence of the introduction by the Tory-Lib Dem coalition government of the Public Space Protection (PSPO) control, the homeless are also being driven from city centres. The intention behind the control order is to criminalize rough sleeping.

In other words, the strategy of the ruling elites is predicated on the formal ordering and disciplining of ordinary middle and working class people. The aim is to push the poor to the periphery, out of sight and out of mind of urban powers for whom responsibility is increasingly disavowed.

The combination of all these factors alters the dynamic of urban space whose reconfiguration not only changes the demographic, cultural and ethnic mix of spaces, but also undermines social networks and local economies upon which local businesses depend for their livelihoods.

More broadly, the hollowing out of large parts of cities in this way alters perceptions of what constitutes private and public spaces and for what use the state intends to put them to. The processes described reflect the historical contradiction between planning in terms of social need and the process of competitive accumulation which can be traced back to the 1947 Town and Planning Act. Although urban planners have often been cast in a heroic role protecting the public from shoddy contractors and the short-term drive for profit by speculators, town planning has been skewed historically by deeply undemocratic practices.

Having been granted wide-ranging powers, local authorities are able to carry out redevelopment of land themselves, or use compulsory purchase orders to buy land and lease it to private developers. With the authorities playing lip-service to objections to the way communities are prioritized to corporate interests, public voices are being drowned out and the bureaucracy of the state seemingly ever more remote from the issues and concerns that affect the daily lives of ordinary people.

The contradictions and the lack of a culture of democratic accountability described, was the catalyst that led to the Grenfell Tower fire tragedy, the official inquiry of which began on May 30, 2018. The governments calamitous housing strategy culminated in Grenfell being labelled a corporate manslaughter crime scene in which the UK government is also potentially complicit. Academic and activist, Rob Hoveman, was explicit in naming and shaming four civil servants who, as a minimum, he regards are worthy of corporate manslaughter charges.

The issues surrounding Grenfell, not only brought the privatization of public space and the UK housing crisis under intense scrutiny, but also highlighted the wider neoliberal agenda that underpins it. This is an agenda that as journalist James Wright put it, is “forcing more and more ordinary people into dangerous and uncomfortable conditions.”

This level of austerity and inequality is reflected in government cuts to frontline emergency services which resulted in the closure of ten fire stations, three of which were in the area of Grenfell Tower. In the UK as a whole, 10,000 firefighters – one in six – have been cut since the Conservatives came to power in 2010. The Conservative-Liberal Democrat Coalition cut fire and rescue funding by 30 percent. Furthermore, as a consequence of the reduction in staffing levels, safety checks in tower blocks have been cut by a quarter.

The Grenfell tragedy is a salutary reminder of how neoliberal ideology, the politics of austerity and corporate corruption that lie at its root, are interwoven within the fabric of the British state.

How did corporate interests coupled with desk bound administrators drive one of the most abhorrent chapters in human history?