I could have done that

Thanks to the commodification of culture, artists have been maligned and minimised to societal anomalies, indulgent characters living in an alternative universe whose success owes either to their innate eccentricity, or hopeless romanticism. Everyone’s a critic. The snobbish refrain, ‘I could have done that’, speaks volumes about the diminished role of art in dominant culture.

Art, for many of us, is reminiscent of elementary school classes where finger painting and macaroni doodles rained supreme. It was a subject of “fun”, entertainment. Our later stages in life saw its role shrink to the status of a hobby, if it held any status at all. For most, however, we exchanged our role as artist to that of observer.

For some though, the role of artist persisted, and painting, drawing, writing, dancing, or any of the numerous creative outlets became essential fragments of identity, or identity in its entirety.

These two poles have resulted in an interesting dynamic. Those who have adopted art for life have been reduced to societal anomalies, characters in an alternative universe who have gained success for their innate eccentricity, or alternatively, hopeless romantics, if success remained elusive. This assessment owes itself largely to the lack of utility found in art, a lack of utility propagated by the increased role of commodification.

Art, however, has not always had this disconnect with utility. Classical art, especially, was seen as a means to project humanity. Paintings, sculptures, poems, all meant to encapsulate the common themes that make us human, the dangers of love and lust, the battle between courage and falsehood, the role of the female body as provider and giver of life. Art would depict life as is, or life as it should be — humanity in-of-itself.

In recent times though, art has transformed to match contemporary themes and the current dominant culture of individualism. Art has become an avenue of self-expression — being in-of-itself, a substitute for “I think therefore I am”. In a way, this has liberated art, it has freed it from the burden, the expectation of encapsulating humanity in its entirety.

It would be wrong however to assume that this liberation has made art any less meaningful, any less utilitarian. This liberation, although proving greater latitude in the mediums and forms of art, remains, at its core, symbolic of humanity. As a matter of fact, the individualisation of art gives us an even more critical viewpoint of humanity. For through individualistic art we are forced to see humanity through the lens of “one of us”. As such, it becomes a more accurate representation of the subjectivity of experienced life. Even more, it forces us to face an even darker reality, a reality that “humanity” might not even exist, that humanity is potentially nothing but the projection of our own fantasies, not the uniform aggregate attempting to be captured in classical art.

Everyone is a critic

The liberation of this art has been interpreted by some as a reduction in its quality. The most common embodiment of this rhetoric comes in the form of a very simple statement — ’I could have done that’.

This sentence, supposed to be the most damning to the arts is in actuality the most radical of compliments; and in its radical simplicity reveals everything wrong with our perception of art, and at the same time everything truthful about it.

First, it presents art in the light of our earlier description of strict structure. That for art to be art, it has to be something special, representative of something unreachable in skill or grandeur. But what is it that makes art grand? As we have already discussed, even the grandest attempts at encapsulating humanity is nothing but a projection of the personally subjective — the artists perception of the external world. Sure this perception might provide us something more relatable, but is that what makes good art? how relatable it is? And if we failed to see something through someone else’s art, does it make it any less meaningful? To us maybe, but it would be wrong to strip it of any meaning altogether simply because that meaning remains hidden to us. On the contrary, hidden meaning only suggests the complexity of our subjective experiences, the differences in our own humanity. How could that possibly make art any less grand?

Second, it is in the truthfulness of that statement that the radicalness of art reveals itself. In the truth that yes, you could have done that, and you can. But by choosing to say that statement you have confessed your active role in choosing not to. Instead of realising art you chose to be the bore criticising someone who has.

The radical in art is that it can be done by everyone and anyone — even you. There is no prerequisite for innate eccentricity, and no longer is there a prerequisite for skills equitable to Michael Angelo’s. With the liberalisation of art, all that is needed is a realisation of the innate, of the human.

Worst of this criticism is not its internal contradiction, but the disregard it presents to the creative process, it seeks to dehumanise and discredit the artist. That for doings something “I could have done” the artist has betrayed their assumed role of the eccentric/grand character belonging to no society, self-assured in their eccentricity and unwavering skill.
In a way though, the perception of the innately eccentric makes it easier to alienate ones-self from art — I am not eccentric therefore I am not an artist.

A convenient rationalisation that nevertheless cannot be further from the truth. For art, even in its most eccentric forms, remains an intensely personal and connected process, one fraught with constant struggles, internal and external.
Nowhere is the internal struggle of art and the creative process captured more beautifully and dauntingly than in David Hume’s conclusion to the first section of his A treatise of human nature. In his book, which is now considered one of the most important texts in the philosophy of mind and morality, Hume concludes with a scathing account of the self-doubt he faced while writing his book.

The positioning of this chapter, almost exactly half way through his three sectioned book, acts, unintentionally, as an additional homage to the paralysis self-doubt plays throughout any creative endeavour.

Methinks I am like a man, who having struck on many shoals, and having narrowly escaped shipwreck in passing a small frith, has yet the temerity to put out to sea in the same leaky weather-beaten vessel, and even carries his ambition so far as to think of compassing the globe under these disadvantageous circumstances. My memory of past errors and perplexities, makes me diffident for the future. The wretched condition, weakness, and disorder of the faculties, I must employ in my enquiries, increase my apprehensions. And the impossibility of amending or correcting these faculties, reduces me almost to despair, and makes me resolve to perish on the barren rock, on which I am at present, rather than venture myself upon that boundless ocean, which runs out into immensity. This sudden view of my danger strikes me with melancholy; and as it is usual for that passion, above all others, to indulge itself; I cannot forbear feeding my despair, with all those desponding reflections, which the present subject furnishes me with in such abundance.”

Hume goes on to brilliantly describe what many know as impostor syndrome, the fear that you will be called out as a fraud, someone misrepresenting the field, wrongfully claiming a belonging to it.

For with what confidence can I venture upon such bold enterprises, when beside those numberless infirmities peculiar to myself, I find so many which are common to human nature? Can I be sure, that in leaving all established opinions I am following truth; and by what criterion shall I distinguish her, even if fortune should at last guide me on her foot-steps? After the most accurate and exact of my reasonings, I can give no reason why I should assent to it; and feel nothing but a strong propensity to consider objects strongly in that view, under which they appear to me.”

In addition to the internal struggles artists face there is the ever looming presence of “the real world” — commodified reality and the opportunity cost associated with pursuing art.

For by pursuing art, one trades off belonging to convention. A form of self imposed exile where instead of the promises of career success, an artist has no more than their own faith and hopes that their creations, their humanity, is recognised as valuable by others. A test of faith if there ever was one.

This cost is the most potent and recognisable by would be artists, for it is this trade-off that is at the centre of the could have rhetoric. Ironically, it is also the perceived madness of this choice that perpetuates the persona of innate eccentricity attached to art. For who in their rational being would choose exile over convention?

It would be asinine to say that the radicalism of art is found withing us all, for art is not an external entity, art is us, and it is that which makes art radical.

With most of us having made the choice to relegate our artistic selves to the status of observers, it is easy to see how that understanding can be forgotten. Nevertheless, it is important to remember that for those who have pressed on with art, as hobby or otherwise, do not do so out of some isolated innate capacity for it; rather, they do it with the full understanding of the risks associated with exposing your personal humanity to a critical audience.

This piece was originally published on Medium and was reproduced with permission of the author.  Enjoyed this piece? Sign up and get updates on Jade’s writings, and excerpts from his upcoming book “Finding Left“ 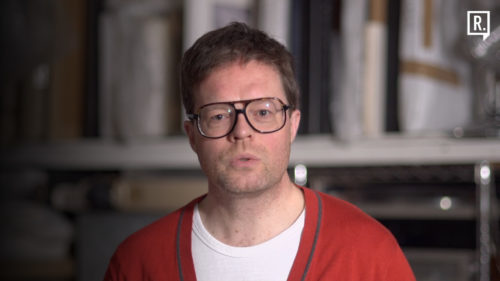