I Wish I’d Been in That Meeting: Volkswagen

You know, the one where the secretive board of VW bosses decided their future direction lay down the road signposted “Electric Vehicles”. They’ve hired Christian Senger from VW technology supplier Continental, where he was involved in the development of electric vehicle systems and autonomous-driving technology, to lead the charge. The message is clear. The mistakes of VW’s diesel-engined past will be fixed by reconfiguring their product lines around electric power.

It won’t work. To explain why, consider the following issue:

(To help illustrate the big picture, let’s dispense with names and consider the crisis at “Corporation X”…)

Corporation X are a profitable multinational business. They’ve sold millions of products with complex systems designed specifically to fake pollution test results, mostly in the huge US car market but also in the EU. Corporation X also benefitted from US and EU loans, subsidies and tax breaks for green technologies too whilst doing this. It looks bad.

Millions of people purchased these illegal products with credit services operated by Corporation X and their financial partners. These customers are now locked into credit arrangements for products that were overpriced and mislabeled. That’s financial mis-selling. Worse still, these products are taxed on their pollutant emissions, meaning Corporation X  and their unwitting customers have evaded millions (possibly billions) in emissions taxes. It looks very bad.

Corporation X is now subject to investigation by multiple law enforcement agencies, and is (at best) likely to be fined billions and (at worst) will get shredded by compensation claims and even criminal prosecutions. That’s bad news for their unwitting investors who bought shares at a price buoyed-up by profits from fraudulently mis-labelled products. It looks very, very bad.

Faced with an epic scandal, Corporation X’s response is “we’ve totally screwed up”. No kidding. And their solution to the crisis? Stop making the illegal products and hire top experts in technologies that don’t need to cheat pollution regulations in order to sell. Do they have an excuse? Kind of. You see, our tree-hugging lawmakers keep making it harder to profit from burning oil and spewing out greenhouse gases. This placed Corporation X under a lot of pressure. It was cheat or change, and it’s hard for giant corporations to change, so…

The true extent of VW’s problems are staggering, but they’re not related to diesel engines so much as company culture. There’s something culturally rotten within a corporation that builds products designed to circumvent legal regulations. This isn’t an accidental oil spill. It’s not a rogue trader bringing down the bank, or a few crooked brokers fixing the inter-bank lending rate. This took time, investment, R&D efforts and the compliance of dozens, possibly hundreds of middle ranking and senior employees within VW’s workforce.

It’s hard to imagine what sort of amazing deal they offered the new electric guy.  A sporty new Tiguan? A get out of jail free card? Eternal life? The mind boggles. Whatever happened at that meeting, I wonder if anyone raised their hand and pointed out that trying to make greener products is what landed them in the brown in the first place?

There was another meeting before Christmas that would have been interesting, where 3000 VW managers voted to drop their slogan “Das Auto” (The Car) because it was “pretentious” and “absolutist”. They’ve decided, instead, to have no advertising slogan at all. That’s right. Even VW’s own management have decided “there are no words…” 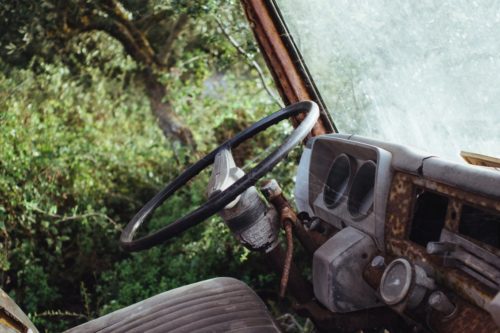 I Wish I’d Been in That Meeting: Top Gear