Keep Calm and Carry on Consuming

Critics of the current economic system condemn our modern-day ‘culture of consumption’. If we measure progress over the course of our lives purely by increased consumption, they say, or if all that motivates us to get out of bed in the morning is the thought of consuming, then not only will happiness elude us but humankind will quickly devour all the planet’s resources.

It’s true that you can’t get enough of what you don’t need, but consumption is still an essential part of life and an intrinsic part of our economic activity.

A balance has to be struck between using resources efficiently and ensuring that people can secure what they need to live long and healthy lives. This is perfectly achievable, and it’s important not to demonize all consumption over and above basic necessities. While there is a great deal of superfluous and unnecessary production feeding the kind of consumption that provides rapidly diminishing returns, life would be very dull if consumption were restricted to a bare minimum. We humans need some novelty.

A new economic order, one that would raise the quality and experience of life for everyone, is a hard enough sell without requiring further sacrifices from people for whom life is already a struggle.

Equally, economic success is not dependent on relentless growth in output, as most economists would have us believe. If the population grows, then additional wealth has to be created for average consumption levels to be maintained. But, if population levels are steady, there is no requirement to ‘grow’ the economy. Some people may decide to work harder and so enjoy greater consumption, and economic output may increase as a result, but the absence of growth need not have a negative impact on either the economy or individual wellbeing.

Who benefits from this scenario? Banks earn interest on their loan repayments, and shareholders enjoy year-on-year increases in their dividend payments. The rest of the population – the vast majority–divide into two parts. There are those who still have work but who have no stake in the factors of production. They suffer downward pressure on their wages. And there are those who don ’t have work, and for whom any reduction in prices is therefore meaningless as apart from the basics, everything else is out of reach of their meagre welfare payments.Since the financial crisis hit in 2008, economic growth has stalled in all the advanced economies.

Under current arrangements, when growth falters the economy enters a rapid downward spiral: unemployment rises and demand collapses, creating a vicious circle of further contraction. But why should a bust always follow a boom? Why should business and consumer confidence fall to such an extent? Why is it that millions are routinely thrown out of work every decade or so? There must be something about the way the economy is configured that makes this outcome inevitable. And there is.

Over the last three decades economic success has been measured not only by growth in output, but also in terms of reducing production costs. At the same time the emphasis on short-term returns has increased, primarily in the form of shareholders’s expectations of rising dividends. Think about what must happen for each of these objectives to be achieved. First, firms must find a way of cutting the cost per unit of output. This is most commonly achieved by borrowing money for capital investment to produce the same output while employing fewer people. Firms need constantly to reduce their costs, otherwise, in a world where people expect things to get cheaper (and can only afford them if they do) there won’t be sufficient demand to generate the profits required to repay the bank loans or pay the dividends demanded by shareholders.

But hang on, prices generally don’t go down. Whether the economy is booming or not, prices nearly always go up. So these gains in productive efficiency are not passed on to ordinary people, whose wages rarely keep up with inflation. In reality, it’s only people who have a de facto ownership stake in the economy – shareholders, landowners, business owners and money men – who benefit from this relentless drive for efficiency improvements and profit growth.

So we have a vicious circle. When the economy sheds jobs, demand falls; when unemployment reaches a certain level, demand falls to such an extent that the whole system is no longer viable because demand is so weak that banks won’t lend for investment. It’s no wonder the economy has to grow continuously to avoid meltdown, and not surprising that, after the 9/11 terrorist attacks, President George W. Bush didn’t call for sacrifice, but instead for shopping: “Get down to Disney World in Florida,” he said. “Take your families and enjoy life, the way we want it to be enjoyed.” He was presumably advised to extend the credit-fuelled consumer binge as long as possible in order to ensure the economy didn’t implode on his watch. Now we ’re all paying the bill.

With so many excluded, unless those who do have work spend to the hilt, the circular flow of money from consumer to producer and back again will not be not sufficient to maintain production levels. Only if consumption grows steadily can recurrent recession be avoided.

In recent times it’s got so bad that the only way of maintaining the appearance of economic success has been to create money (out of thin air) and lend it to people for consumption, just to keep the economy afloat.

This scenario is sometimes called ’the race to the bottom ’. Costs are constantly reduced, price increases moderated and profits expanded while growing numbers of people are excluded from meaningful economic activity.

Is the pursuit of happiness even possible? Or does this goal actually make life increasingly miserable and liberty more elusive? 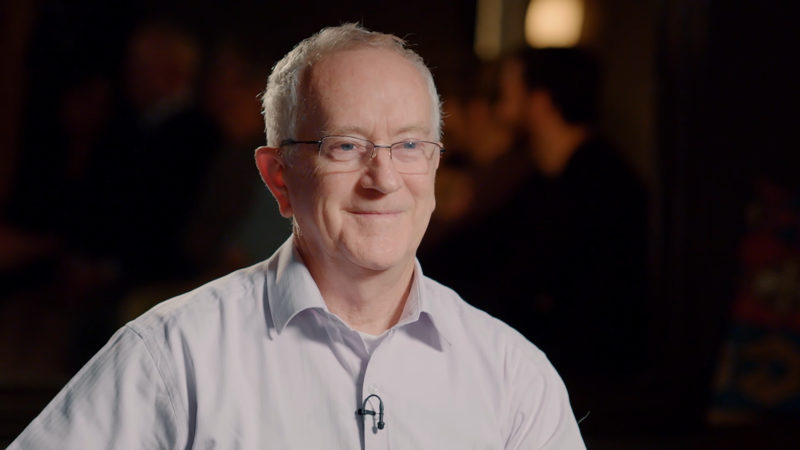 Host Ross Ashcroft talks to Professor Steve Keen to understand the extent to which mainstream economists have been peddling their ideology as scientific fact and the damage their blinkered ideology has done to the future of our planet.