One Day All This Will Be Yours

It is entirely natural for parents to want to support their children in every way possible, and for some this includes making financial provision for their offspring after their deaths.

Several nations impose some form of tax on inheritance, although in the last decade many nations have abolished such taxes as others have chosen to keep them.

But to deter an essentially altruistic act by the threat of post-mortem taxation seems unduly severe.

Tax at the Source not at the Death

There’s no problem with inheritance if the wealth being bequeathed has been justly earned. Why shouldn’t people pass on whatever they have left to their children, or to anyone else they wish to help out? But if this residual wealth is unearned; if it originates in the capacity of some people to get rich through mechanisms – land rent, speculation, controlling the means of money issue, or taking as profits the rightful rewards of labour – which are unjust, then it cannot be justly passed on.

The solution, then, is not to impose a tax on inheritance without distinguishing between earned and unearned wealth. It is to tackle the sources of unearned wealth so that only justly earned wealth can be bequeathed. Then it’s just a question of how people choose to spend their hard earned cash: on themselves, while they’re alive, or on their kids, when they’ve gone. 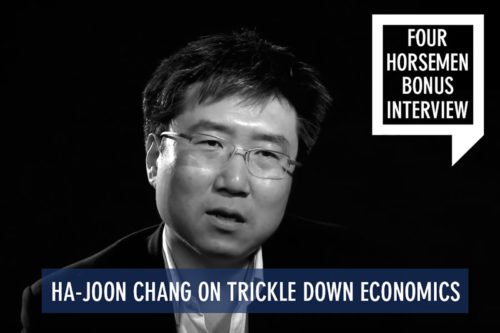 Economists have little to say about inherited wealth and never consider the economic and social impacts of other forms of inheritance. Given that differences in earnings potential are heavily influenced by inheritance, perhaps they should.

Whether genetic or environmental in origin, any inherited advantage is, by definition, unearned. None of us have control over our genetic make up, nor are we able to influence the environment in which we are raised. Yet both have a heavy bearing on our life chances.

A just and inclusive economy would take account of the impact of inherited differences. It would acknowledge that current economic arrangements, which favour the concentration of ownership of the factors or production, and channel unwarranted riches into the hands of a minority, also serve to over reward those who enjoy certain inherited advantages.

Hard Work vs. the Will

Last week we looked at the problem of how to divide up the surplus earned by a firm between those who supply labour, and those who supply capital in the form of experience, expertise, ideas and creative inspiration. In reality the line between the two is very blurred. If an assembly line worker comes up with an idea for increasing productivity, he is probably making a contribution of capital. To some extent, every worker is part-capitalist, part-labourer. And it is inherited qualities that determine how much of each an individual is able contribute.

Success is not simply a matter of hard work. Most of those who fail to get ahead in life, do so because they inherit no advantages. The experience of a secure, loving home and a decent education are critical. Many people are denied these basic human rights and thus have their life chances heavily proscribed. Everyone should have the chance at least to earn a living wage in return for their labour. The inherited advantages of some should not prevent anyone from earning a decent living.