Roulette for the Rich

As Simon Johnson says, “Wall Street has become a very specific type of casino. Unfortunately it’s not the type they have in Las Vegas that is a legitimate form of entertainment. It’s a casino that has massive negative effects on the rest of society.” 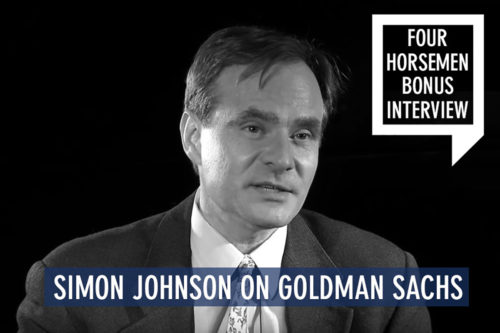 How was this allowed to happen? It was not only allowed, it was actively encouraged by democratically elected governments which were persuaded that deregulating financial markets would rain down great economic benefits on everyone. Whether Ronald Reagan and Margaret Thatcher really believed this, or whether they were motivated by a desire to reinstate the class divisions that had begun to erode in the post-war years, remains a mystery. Whether the Neo-classical economists who encouraged them believed in the likelihood of a positive outcome is also impossible to fathom, as is the motivation of left-of-­centre administrations which embraced Neo-liberalism and continued the deregulation of finance.

Whatever their motivations, they have bequeathed us a financial system that works in the interests of an elite minority and routinely holds the real economy and the ordinary taxpayer to ransom.

Even today, in the depth of crisis, when the evidence for the culpability of banks and the configuration of the financial system is plain for all to see, gutless politicians are still unwilling to take measures to tackle the problem. A few brave economists, people like Simon Johnson, Herman Daly, Steve Keen, Dean Baker, Michael Hudson, Joseph Stiglitz and Ha-Joon Chang, are prepared to put their heads above the parapet. They speak economic truth in the face of corrupt power in finance and politics, but the majority of the profession remains silent, refusing to acknowledge the abject failure of their models and assumptions. The cowardly attributes of many neo-classical economists are showcased in Charles Ferguson’s excellent film, Inside Job.

The term ‘financial product’ is meant to persuade us that the finance industry is no different from any other. Its more ‘entrepreneurial’ characters (known as quantitative analysts or ‘quants’) invent new ‘products’ which can then be traded for profit by others. But such investment vehicles are not products in any meaningful sense. While some are derived from genuine economic activities, any gains or losses in their value do not, generally, reflect gains or losses in real wealth. Real wealth is goods, services and experiences created in the real economy that people want and need to live a secure and fulfilled life.

Money made through smoke-and-mirrors antics in the financial market has no connection with wealth creation.

When those whose income is derived from activities that do not create real wealth use that money to buy real things, the effect is to deny the full benefits of hard work and entrepreneurship to those who do create it.The organizations and individuals that populate the financial markets have been given such free rein that many of the complex investment vehicles they have invented are beyond the power of any authority to regulate. If the banks themselves are unable to trace the provenance of their assets, what chance do the regulators have? If the complexity and opaqueness of such ‘investments’ is a major contributory factor to the current crisis, and part of the means by which finance is able to hijack the real economy, and if they cannot be effectively regulated, then there should be no place for them. A democratic society has a choice between allowing a wealthy minority to further enrich itself, and ensuring that everyone has a shot at working to feed, clothe and house themselves and their loved ones.

The only true beneficiaries of current arrangements are the super-rich and those who have access to corporate funds with which to play the financial markets. Opponents of financial market reform give dire warnings about the impact on the middle classes in rich countries, whose pensions are dependent on the ability of fund managers to access the full range of investment ‘products’. But most pension funds’ investments are spread across a broad range of assets. If serious reforms to the financial system were to be undertaken in a carefully planned and coordinated way, those assets would be protected. Pensions are under far greater threat from unscrupulous bankers and the economic instability caused by hysterical financial markets. That instability will continue for decades if the excesses of the financial markets are permitted to continue unchecked.

Defenders of the status quo argue that there’s a big difference between speculation in markets and purposeful market manipulation. In truth, there is no distinction. If you make an investment in the right to buy a thousand tons of grain six months from now, but you play no part in the supply chain that transfers grain from producers to consumers, then your investment negatively impacts the market. Farmers who produce grain and the consumers who need it for food both suffer at the hands of money men who manipulate the price mechanism for personal gain, and extract real wealth while doing no real work.

According to the World Development Movement, “since widespread deregulation of financial markets in the 1990s, speculators’ share of basic foods like wheat has increased from twelve per cent to sixty-one per cent. These traders have no connection to the actual food and are only interested in the profit it will make. Banks, hedge funds and index funds are betting on food prices in financial markets, causing massive price rises in staple foods such as wheat, maize and soya. In the last year, average food prices increased by fifteen per cent, driving more than forty-four million people into extreme poverty.”

Speculation in commodities has become a principal source of investment bank profits. Goldman Sachs, Barclays, J.P. Morgan, Deutsche Bank and Morgan Stanley all go to absurd lengths to extract wealth in this manner. Goldman Sachs alone achieves net revenue of up to five billion dollars a year from trading commodity derivatives. This is equivalent to around ten per cent of its total revenue. They do it with thousands of transactions enacted every minute as traders try to exploit the time lags that persist in markets despite the efforts of software engineers to create ‘real-time’ trading systems. Traders will buy a few million dollars’ worth of wheat and sell it on just seconds later in order to benefit from the tiny arbitrage difference that arises between trades until the technology catches up with the market. The trade may only make a few dollars, but repeated often enough by enough traders, a tidy profit can be accumulated very quickly. This isn’t economics. It isn’t work. And it isn’t ethical. It doesn’t create wealth, but it’s the kind of activity that is rife in the financial markets, and is why those markets require a massive overhaul so they support the real economy instead of persistently undermining it.