Host, Ross Ashcroft, met up with documentary filmmaker, Rehad Desai, to discuss how South Africa and her people have been looted by shadowy fixers, venal politicians and dodgy corporate deals that have all but bankrupted the country.

Desmond Tutu famously said, “We don’t want apartheid liberalized. We want it dismantled.” But what if after being formally dismantled, the neoliberal economic structure that underpins apartheid remains in place?

What purpose does it serve for legislators to grant the political right for South African citizens to metaphorically demonstrate against apartheid outside Cape Town’s landmark Ritz Hotel, if the primary requirement to eat there is not on the basis of ethnicity, but on the attainment of money and power?

The ideology of aspiration pertaining to the latter relates to how the mass of the population on the ‘outside’ are led to believe that they will one day be able to join the ranks of the elite class on the ‘inside’ if only they work hard enough. This rhetorical device which seeks to whitewash neoliberalism and the staggering inequalities it produces, have come to define modern day South Africa arguably more than any other nation on the planet.

As a former South African political exile, current affairs journalist and documentary filmmaker, Rehad Desai, is ideally placed to provide some historical context and chart the political trajectory of a country that, in July, succumbed to a level of violence and looting not experienced since the end of apartheid.

In the documentary film, How to Steal a Country, Desai focuses on the context that gave rise to the violence and looting. The filmmaker highlights how South Africa’s post-apartheid vision is concerned primarily with trickle-down economics, namely, government support for unregulated global capitalism and the reining-in of the state achieved through the financialization of the public sphere.

Trickle down economics effectively grants corporations carte blanche to dominate the state and to facilitate the accumulation of wealth by those at the top through the privatization and ‘asset-stripping’ of public institutions, infrastructure and natural resources.

Desai chronicles how the cultivation of relationships between the Gupta brothers, former president, Jacob Zuma and other ANC figures resulted in them being implicated in a massive corruption scheme that involved the corporate capture of the state in South Africa. The filmmaker notes how this became a by-word for trickle down economic neoliberalism and the co-opting of democracies for profit.

In How to Steal a Country, Investigative Journalist, Thanduxolo Jika, points out that Desmond van Rooyen who Jacob Zuma had installed as Finance Minister in 2015 had attended South Africa’s National Treasury with a well known Gupta associate. The journalist exposed the infamous Gents finally e mail detailing business opportunities in Africa for South African companies, plans to avoid ratings downgrades and an outline of government spending plans.

In the film, ANC member, Barbara Hogan, states how markets were subsequently thrown into the abyss, how unemployment sky-rocketed and how living standards for the general population plummeted. According to Desai, the appointment of van Rooyen as well as the e mail revelations, were the big turning points for South Africa, having crystallized in the public’s mind the corporate capture of the country.

“Within a few days, there were 200,000 people on the streets of South Africa for the first time, really racially mixed protests happening, a common purpose, and people could see what was happening. It was the very last resort”, says Desai.

The filmmaker argues that the normalization of corruption and rent-seeking capitalism in South Africa wouldn’t of been possible on such a huge scale without the connivance of the likes of former advisor to Margaret Thatcher, Lord Tim Bell from Bell Pottinger or HSBC and the other big international banks.

“There’s no better place than London to go when it comes to white washing PR services”, says Desai.

Indeed, the city has a reputation for being the laundering capital of the world. Having won an account in South Africa to look after the Gupta’s holding company in 2016, Bell Pottinger introduced the company to white monopoly capital to deflect attention from the Gupta’s corrupt activities.

Corrupt corporations have been able to engage in successful PR rent-seeking strategies within South Africa because the history of apartheid in the country has, through the racialization of issues, enabled them to gain social media traction and to change narratives.

In Desai’s film, Investigative Journalist, Susan Comrie, asserts that the Gupta’s re-branding of their involvement in state capture was undertaken as if they were disrupters who were coming in to challenge the powerful economic elite.

“So what you saw happening was journalists being kind of branded as the lapdogs of white monopoly capital”, says Comrie.

Writer, Ed Caesar, argues that these ideas were not original. On the contrary, Caesar says it’s the way the arguments were deployed in Facebook posts and Twitter memes to distract against claims Zuma was corrupt and inept that was new. 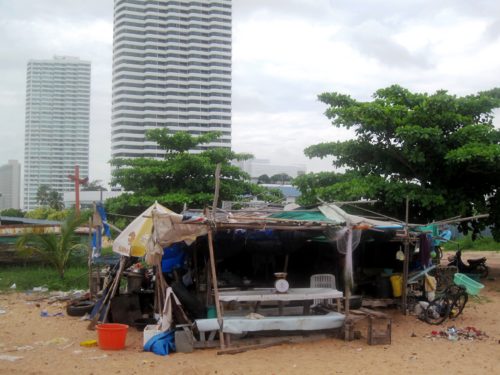 By conflating the actions of contemporary foreign rent-seeking corporations with their colonialist predecessors, the intention as expressed, for example, in Zuma’s testimony to the Zondo Commission. was to deflect attention away from himself and other contemporary collaborators towards imperialism.

During his testimony, Zuma spent several hours claiming that state capture amounted to a decades-long plot to get him out of power. The reality, however, was that Zuma ‘played the victim’ in an attempt to mobilize public opinion in support of his extraction policies. So what ought to have been a trial to bring Zuma to account for his role in the looting of his country, actually became a piece of political theatre.

Human Rights Lawyer, Brian Currin, points out that the kinds of corrupt, extractive institutions of which Zuma and his white patronage network benefit from, is not unique to South Africa. Rather, their inherited status, under the guise of democracy, is commonplace throughout sub-Saharan Africa.

“It’s very easy to fall into the practices of the colonizer and I think that is part of our problem. What we see today are practices not dissimilar from what colonizers were doing at the turn of the last century. If you’re able to do that in something that looks like a democracy, it becomes sustainable. And I think the objective was to establish that state and enable it to continue ad infinitum”, says Currin.

In the context where foreign companies come to South Africa to extract its wealth whilst everybody else suffers, the logical response among the population is to riot for food. Desai posits that the problem for South Africa after 25 years of democracy is that the gap between white and black wealth remains not only intact but has actually widened.

“Extreme wealth”, says Desai, “lives side by side with extreme poverty which is a recipe for unhappiness and for people to opportunistically exploit. What we’ve seen is what they call a re-racialization of the country.”

The filmmaker says the looting of the country which gives rise to extreme inequality will continue unless Zuma and his factions are torn apart.

“It can only end positively”, says Desai, “if President, Cyril Ramaphosa is prepared to go against the whole array of leading ANC members, leading ministers and leading government civil servants, who we know are continuing to use their position of power to enrich themselves.”

Desai doesn’t appear to be optimistic that Ramaphosa will clean up the corruption:

“We have a minister of health from Ramaphosa’s own faction that’s just taken the equivalent of £10 million or so for a communication campaign around Covid and pocketed much of that with his partners in crime. So we have a real credibility problem here, a real crisis of legitimacy for the ANC.”

Is Ramaphosa prepared to worsen it by continuing to open the can of worms and to go against Zuma? We’ve seen what the Zuma faction are prepared to do. The question is, does Ramaphosa have the stomach for a fight to the end and to renew the African National Congress?”