You would think that the sixth largest economy in the world would be able to organise itself to provide decent school meals for its children, but alas, the UK has faltered.

It’s astonishing that the Manchester United number 10 has done more for hungry schoolchildren than the occupant of number 10. The former knows all about childhood hunger. The latter thinks the so-called free market can deliver everything.

Host Ross Ashcroft, met up with School Food Matters founder, Stephanie Slater, and Campaign Officer at We Own It, Johnbosco Nwogbo, to discuss how the privatisation of food is putting profit over the well-being of our children.

One of the cornerstones of a progressive society is the extent to which the nutritional demands of its youngest and most vulnerable citizens are catered for. Unfortunately, the UK falls short in this regard. It is a remarkable sign of the times that in 2021 in the sixth richest economy in the world, UK parents are continuing to have conversations about the need for schools to provide children with sufficient nutrition.

Stephanie Slater set up the campaign group, School Food Matters in 2007 as an avenue for parents to air their concerns in response to the “completely appalling food” served at the London borough primary school Slater’s two children attended. During this period only 26 per cent of children in that borough were eating school meals, an unsurprising statistic given that most of this food, which consisted of shipped-in reheated frozen ready meals, ended up in bins.

In 2011, the local council invited Slater to look into how the catering for 38 primary schools could be improved and was awarded a contract to turn things around. What transpired was a complete cultural transformation of the school meals system in this London borough. With very little investment, Slater encouraged cooks to cook again and it wasn’t long before fresh food began to be produced on site.

As the quality and provenance of school dinners improved, the demand for them doubled. This, in turn, significantly reduced the meal price which, up to certain point, positively impacted on pupils. The problem, as Slater acknowledges, is that the focus in recent years has increasingly shifted, not so much to quality, but access and ensuring that all schools deliver on nutrition and food standards.

Although progress has been made, anecdotal evidence suggests that too many children continue to go hungry at school which leads to impaired performance. Slater argues that the reason for this is largely due to a lack of monitoring within the system:

“Schools and governors are not being asked to report on any of this at the moment. We want every child to have access to good nutrition and a good experience of food at lunch time. We want to get back to children sitting down together and learning about social skills”, says Slater.

Quality food is thus not only related to the nutritional aspect but human well-being and the pastoral aspect associated with them. “We have a duty of care. When children are at school, we need to be giving them the good stuff and teaching them about food that’s going to keep them happy and healthy”, adds Slater.

One of the other major problems is that inner city schools are surrounded by numerous fast food take away’s as well as bus stops and billboards which are covered in offers of cheap junk food. This kind of advertising is engineered to play into people’s propensity for impulse purchases of high fat, salt and sugar foods.

Slater highlights the correlation between low income, poor diet and health inequalities but adds the caveat that educational and financial support opportunities are available within many schools to help families make better nutritional choices. Where these opportunities aren’t available, Slater recommends that parents take an active and collaborative approach to help improve schools.

Slater says that parents need to not only research the individuals on governing boards responsible for school food, but that they also need to seek out the opinions of other parents. It’s a sad indictment of the UK that in 2021 it requires the combined actions of the charity sector and pushy parents to ensure children are served nutritional meals at school.

The reason why many children in the UK struggle to get access to a decent school meal is because the problems are systemic. ‘We Own It‘, Campaign Officer, Johnbosco Nwogbo, contends that privatized meal programmes in schools are predicated on the prioritization of profit over the well-being of children:

“One of the underlying rationales for privatization is the idea that private companies will do a service better for less money. But the evidence has shown us, that private companies pretty much just care about the profit and they will do whatever it takes to maximize it. And in the case of free school meals, what we’ve seen is that private companies hire as few staff as they can absolutely get away with and hire them on a pittance so people don’t have the right amount of motivation to do a good job”, says Nwogbo.

A succession of scandals involving the company, Chartwells, is indicative of the fact that many schools across the country, over many years, have cut corners in terms of the quality of food based on the profit-maximizing business models of the companies many councils outsource to deliver them.

“Not only do these companies pretty much scrape off significant portions of the money they are paid to deliver the service, they actually cost councils much more than it would cost if the councils themselves ran the service in-house”, says Nwogbo.

The company, Caterlink, who provide meals to almost all primary schools in the Brighton and Hove region of the UK, is an example of an outsourced free school meal-providing enterprise that’s making a financial killing by feeding children ‘dead food’ premised on an expansionist business model underwritten by the state.

“These companies put themselves between the children and their food and extract a great deal of profit, smash the producers and smash the children in the process”, says Nwogbo.

Low income families whose children are exploited in this way, are reluctant to complain, often because of the stigma involved. Many families don’t feel worthy or entitled to receive ‘state hand-outs’ which in reality they have partly paid for through their taxes. Many others are grateful that their children are fed and have not been poisoned in the process.

Outsourced companies step in and take advantage of vulnerable people who are demonized by a pernicious and endemic system of corruption. “That’s why ‘We Own It’ has been calling for local councils to be given control for this service to be run in-house so that local people can have oversight. Parents would then have democratic accountability and control over what their children are being fed so that we cut out private companies extracting huge profits at the expense of little children”, says Nwogobo. 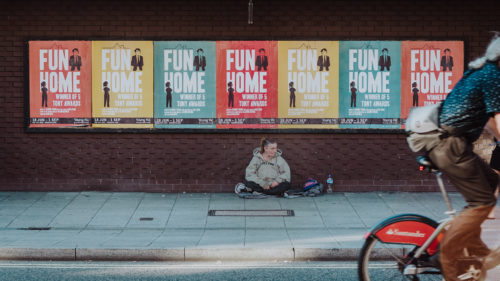 Hell of a state: What’s behind the growth in inequality?

It’s also important to understand that from a pastoral care point of view, the undernourishment of children should not be viewed in isolation. We see the impacts, for example, in terms of university attainment gaps and how undernourished children who become adults perform in wider society and the economy. Eating nutritious food from a young age is a long-term investment that benefits, not just the individual, but society.

Nwogbo argues that there are many interesting and successful working models throughout Europe that the UK government could be looking at. Finland, whose principles and philosophy is centred on investing in children’s education, is a case in point.

But Nwogbo also highlights the progressive initiative undertaken by Nottingham City Council which has brought its catering services back in-house. The council has come up with innovative ways of selling services and re-investing the money back into the production of high quality food for its children.

Nwogbo also cites the Leeds model where their control of money within the system means that they’re able to provide for children outside of school periods. “There are councils in Britain that are doing a good job. And we need to really look at these models and try to expand on them across the country”, says Nwogbo.

How much do we really know about the dynamics of money?