In this weeks episode, Professor Werner discusses a whole a range of banking issues including the Weimar Republic, central bank digital currencies, credit creation, the war on cash, crypto, gold, the date of the next crash and personal sovereignty.

In last weeks edition of Renegade Inc., Economist and Author, Professor Richard Werner, discussed at length the concerns expressed by the House of Lords in relation to the scatter-gun approach to quantitative easing undertaken by various policy-makers, strategists and financial institutions.

In the early 1990s, Professor Werner foresaw the emergence of asset price inflation, long recessions and banking crisis that the Wests QE approach of juicing asset markets copied from Japan during the mid-1980s helped usher in. Werner’s proposed policy of credit-based money supply and the use of targeted GDP transactions into the economy, on the other hand, would have arguably prevented these destructive outcomes.

Werner says that it took Japan until 2013 to finally increase bank credit to the real economy. This resulted in the expansion of its GDP which, up to that point, had been marked by a period of either low or negative growth. The problem for the West at the moment, as Werner sees it, is not that bank credit is not growing (since March 2020 bank credit growth has boomed), but rather – given the concerns Werner expressed in April, 2020 – is that central banks appear surprised that inflation has now arrived.

Nevertheless, premised on the fact that there has been a recent reduction in bank credit creation and also that the central banks have reduced their liquidity injections compared to a year ago, Werner doesn’t believe we are heading into a Weimar-style period of galloping inflation.

Rather, the economist says that a more relevant comparison to what happened from March last year is much more akin to centrally-planned Stalinist Soviet Union type scenarios:

“What we have is massive intervention by the government in the economy by introducing restrictions, including price controls, on so many parts of the economy as we’ve never seen before in the UK”, says Werner.

The economist notes, pertinently, that the Stalinist model described is consistent with the morphing of the Covid agenda into the climate change prevention agenda.

“We’re supposed to switch to electric cars but the electricity supply in the world is not large enough to do this”, says Werner.

As was the case with the Soviet Union, car use is, therefore, likely to be restricted to the Western equivalent of the Politburo while the vast majority of ordinary people will effectively be forced on to public transport. 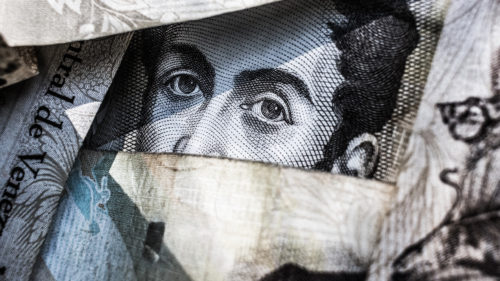 Allied to this rather bleak picture, is what Werner says are moves towards a global war on cash. The economist cites the example of India as a country where millions of people have had their wealth in the form of cash savings wiped out at a stroke.

“If they can do this in a developing country they can do it anywhere. Even in countries like Germany and Japan where cash is still quite popular there are centralizing forces at play that limit, by law, the maximum amount of transactions that can be paid in cash”, says Werner.

The economist adds that the implications for society on unleashing a centralized digital currency are potentially devastating. Werner says the concern is not the proposed use of digital currencies per se which have already been in use for decades, but the kind of Soviet model of banking outlined above.

“Some banks are proposing digital currencies that aren’t really currencies but essentially surveillance and control tools that have frightening totalitarian aspects to them and at the same time undermine the banking system by driving banks out of business”, says Werner.

The economist adds that one of central banks which, ironically, doesn’t have these frightening negative aspects, and has both its digital currency and an alternative model of decentralized banking in place, is the Chinese Central Bank.

“With that design, you will not kill the banks and you will continue to have the potential for high economic growth and small firms doing well. In the UK we only have five big banks dominating banking. Small firms, therefore, don’t get enough credit. Further centralization also contradicts the Bank of England policy to have more banks”, says Werner.

The crucial point of discussion is what type of digital currency, if any, do we want and for what purpose?

The problem of cutting out intermediaries as a way of getting money into the real economy is determined by who gets to decide who will select the small firms that need to be lent newly created money under conditions where this money is directly injected into the system by a central bank?

Werner says if firms are given existing money, it won’t lead to economic growth. Neither will growth be achieved, he posits, under a centralized system where the central bank has a monopoly over the creation of money. Werner is also cautious of supporting the notion that alternative non-bank systems like, for example, webtel.mobi, are feasible options for creating money.

“The key question one needs to ask”, says Werner, “is who in that proposed system is creating money? How is that limited to which players and under what conditions? That will determine whether it’s going to be a successful system where we have growth and prosperity.”

“Often these proposals are done without credit creation in mind. It turns out when you analyse it, actually, there is no money creation in there. It’s just reallocation of existing resources. That way you will not get any economic growth and then we have a problem.”

With respect to the alleged merits of Bitcoin and other crypto currencies, the economist is equally as cynical:

“They serve an educational and partly PR purpose to get people used to the idea that there could be digital currencies in the future.”

Werner also says that cryptos have become a digital store for wealth and a release valve for gold whose price has largely been kept artificially low and under the control of certain policy-makers.

It’s not just gold that has been manipulated but also interest rates whose rate-setting at low levels the public have been capitulated into accepting based on a false premise.

But Werner says that this story is based on a 200 year old theory linking low interest rates to growth that has no empirical evidence to support it.

The economist proved the existence of a positive correlation between higher interest rates and higher growth and lower rates and lower growth.

Secondly, the economist emphasized that it’s not interest rates that drives economic growth, but bank credit creation. With this theory, banking crisis are prevented because capital gains are also prevented from rising. The Minsky Moment is, therefore, avoided and savers get a return on their money.

Regarding his predictions for the next crash, Werner says it will happen when credit creation for asset purchases slows to zero and then contracts. This will lead to an end in the asset price boom from which will emerge another banking crisis.

Finally, with all this in mind, the economist posits that the concerns people have about their loss of personal sovereignty and economic well-being are legitimate and implores them to speak up:

“You know, when Soviet-style and Stalinist-style policies are being introduced, it’s time to speak up, remind everyone of what in England since the Magna Carta has been enshrined in law. Parliament seems to have shut down in March last year. When there’s no opposition, it’s time to move to a country where there is more freedom”, says Werner.