The explosion of quantitative easing, the epic monetisation of debt and the rise of cryptocurrencies, frothy stock markets and furlough schemes, all seemed to imply we have an endless supply of money. But it also means that we now see money very differently.

But has this got us any closer to understanding what money really is? Or does it now simply mean that we know the price of everything but the value of nothing?

Host, Ross Ashcroft, met up with Economist and Associate Professor at International Institute of Social Studies, Howard Nicholas, to discuss.

When we think of the term apocalypse, what often comes to mind is a set of events that lead to a catastrophe. But in reality, if you go back to the Greek, the term actually relates to the discovery of new knowledge.

As an economist who has studied the theory of money for many years, Howard Nicholas, is recently said to have experienced a ‘eureka’ moment of apocalyptic euphoria. Indeed, it could be argued that Nicholas has created a new paradigm about our understanding of how money is created and what its function is.

The one thing that Nicholas posits is missing from books about the theory of money, is its primary function. The starting point for Nicholas is his rejection of the notion taught in economics that price is determined by supply and demand.

“Prices”, says Nicholas, “are set by companies before they put the commodity into the market. Now, once you say that, you turn economics upside down.”

What’s been missing in most studies is the fact that we use money to set prices, thereby assigning it a value that reflects the real values of goods and services produced. Nicholas says that it’s therefore “utterly nonsensical” when people say we can create value by printing money.

In his analysis, the economist also makes a distinction between money and credit. Nicholas argues that theories that refuse to acknowledge this distinction are ultimately destructive because they misrepresent what we use as money on a day-to-day basis.

“People say the dollar is world money because we use it as a means of payment. That’s not true. What we use the dollar for is to value the goods and services and also the loans that we make to one another, internationally. And it’s only when a currency does that that that it becomes world money”, says Nicholas.

The economist rejects the notion that it’s realistic that something as volatile as Bitcoin or something as relatively small as, say, the Swiss Franc can become sustainable world monies.

In relation to the former, Nicholas says:

“You have to be insane to think anyone, including Elon Musk, is actually going to price his cars in Bitcoin. He will price them in dollars and accept Bitcoin as payment, and that is a very, very, different kettle of fish.”

In view of the current tendency for central banks to print money, one of the things we hear a lot about is the comparison between Weimar Germany and the US. Ever since QE1 in 2009, many orthodox economists and on-line commentators have suggested there is going to be inflation and hyper-inflation.

It’s a notion that Nicholas rejects:

“Nowhere did governments at that time say that they were going to force the banks to give all the QE money to the public but rather that they intended to buy debt with it. Most of the markets were actually initially betting that there would be hyper-inflation. So what we had was a theory that actually fundamentally misled us and misled investors at the time, and people weren’t actually thinking rationally what was the central bank precisely going to do with all this QE, or what it was really fundamentally about”, says Nicholas.

Indeed, even though its been over a decade since QE1, commentators continue to talk about the possibility of Weimar Republic levels of hyper-inflation, that the dollar is going to go to zero and that Bitcoin is the future of humanity.

Most economists broadly agree that the dollar is overvalued and that high inflation is expected to follow in the wake of any depreciation.

Nevertheless, Nicholas believes that it’s not in the interests of the major players in the world who are all export-oriented economies, to allow an uncontrollable fall in the dollar.

“My guess is what you’re likely to see is a new global monetary system in which there is a phased and ordered depreciation of the dollar otherwise you’re likely to see a massive collapse of the global financial system. Nobody wants that and one can’t really afford it at this juncture”, says Nicholas.

Ultimately, as far as the economist is concerned, the bottom line is centred on the functions performed by money.

“The thing that everyone misses is this: Why is it that no matter what we have done, there has been deflation? Why is it prices have continued to fall? The US has been running budget deficits now for going on 12 to 13 years. And it’s been getting greater and greater.” 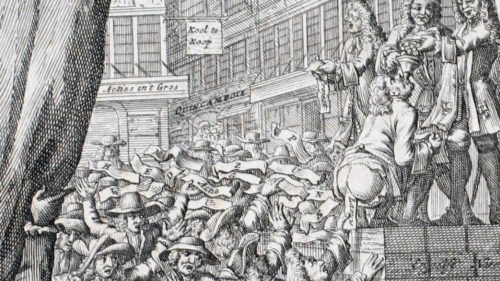 Volatility in the Age of Quantitative Tightening

Nicholas, who believes in the long cycle, says that the one force of gravity that has been consistently ignored is productivity.

“We’re in the middle of one of those great technological revolutions that last appeared in the 1920s. What happens at the bottom of a long cycle is you have this huge accumulation of debt. Why? Because the system is not working.”

Nicholas argues that in order for the system to regenerate and go into its upswing phase, the non-repayable part of accumulated debt needs to be destroyed. The ongoing debate among economists is how best this can be done? Hyper-inflation and the monetisation or cancelling of debt are widely seen as potential remedies.

Nicholas ;posits that the discipline of economics since at least the era of Reaganism and Thatcherism 45 years ago has essentially been destructive.

Nicholas says that from his perspective, it’s easy to prove that orthodox economics has always been ideological and lacking in science.

“This discipline”, says Nicholas, “was born as the result of an ideological attempt to undermine classical economics. Only a matter of 20 years ago, the mantra from the textbooks was you print money, you get inflation. So where are all these academics who told us that we would get hyper-inflation? This was an absolute pillar. If the neoliberal economists intend to abandon this, they actually have to abandon the foundations of everything that they’re teaching.”

Nicholas is to be credited for putting his money where is mouth is in the sense of only investing in, and teaching, the things he believes in and has researched as opposed to adhering to prevailing orthodoxies.

In this regard, Nicholas has not only solved the conundrum of money, but has critiqued the foundations of the economic discipline upon which both government policy and investment decisions are made.