So, what should economics be about? Well, that depends on your values and world view. If you believe that everyone should have an equal chance in life, and that currently they don’t, then you will support changes to the economy that promote the equal distribution of life chances. If you don’t care so much about equality of opportunity – or you think everyone already enjoys adequate life chances – then you’ll be less excited by prospects of a reformed economics that gives insights into how to build a more inclusive society.

However you feel about it, it’s difficult to argue with the observations that the distribution of life chances is currently extremely unequal, and the discipline of economics currently helps reinforce this injustice.

The economy has one purpose: it is the means through which people interact with the natural environment to produce the things they need to survive and flourish, along with other less essential stuff that improves the experience of life. This doesn’t mean the structures and institutions that make up the economic ‘system’ should deliver an equal distribution of wealth among the population. They should, however, ensure a fair distribution of economic opportunities. 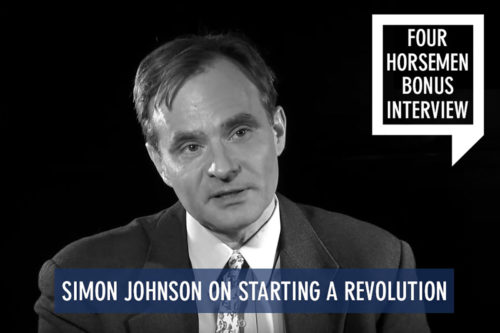 Simon Johnson: On Starting a Revolution

In the Four Horsemen film, former IMF Chief Economist Simon Johnson suggests that “it’s true that when you organize human society some people get ahead and some people struggle, but that’s a natural mechanism.” And he’s right: some people use their opportunities better than others. Some use their innate talents and abilities to earn more than most; others choose to forego great wealth and instead choose work that gives them satisfaction in ways that have less to do with material consumption. But whatever their choice, in a civilized, inclusive society, everyone should, at the very least, be able to secure their basic needs.

By any measure, the current economic system is failing to distribute economic opportunities so as to encourage that outcome. The objective of economics should be to work out why this is the case and propose improvements. By reaching consensus on what constitutes a successful economy we can then make economics accountable to those it’s supposed to serve: everyone in the world who depends on the economy for survival.

Economics – the Lance Armstrong of Academia

It’s astonishing that economics has got away with it for so long: no other academic discipline is so influential and so unaccountable. When an aircraft crashes there is an extensive investigation into why the accident occurred. When the global economy crashes – an event that affects millions of people – there is no such inquest. Why not? Could it be that the discipline of economics – whether its practitioners are aware of it or not – underwrites a system that reinforces minority wealth and privilege, grudgingly providing opportunities to the majority only because the elite would rather not dirty their hands with real work? Over the last three decades, the economic system has been redesigned to satisfy elite greed rather than the basic needs of the wider population.

Economics has long struggled with questions of morality. Today it has no moral dimension at all. The impact of this escape from accountability on the lives of ordinary people is not only disastrous, but is also deeply anti-democratic. Over the last two hundred years, the noble and innovative discipline handed down by Adam Smith and his fellow classical economists has allowed itself to become a major factor in the decline of our civilization.