Amazing weather, beautiful beaches, plentiful natural resources, a great standard of living, and a fantastic education system… Australia deserved the title ‘The Lucky Country’ it gained back in the 60s, after the publication of a novel of that name.

But, today, Australians are world champions in private debt, the country presides over a massive housing-affordability crisis and inequality rages – so what went wrong down under?

Australia has long been regarded as a ‘lucky country’ based primarily on the carefree attitude of its people and a good quality of life afforded them. During recent times, however, the phrase appears to have lost much of its meaning. Being ‘lucky’ today seems to relate to the extent to which people have been able to capitalize on the nations post-mid 1990s house price mania.

With property prices in Sydney peaking at nearly 14 times average earnings, a trend propped up by government interventionist policies, the housing market has become fomo driven with cheap credit. Many people have been unable to get onto the housing ladder, while others have found themselves trapped in negative equity.

Tony Locantro predicts that the culmination of what he terms “mortgage prisons” will be the kind of unkept ghettos seen elsewhere in the world. With the financial stimulus in Australia soon set to end, the result could be devastating for the country.

An overpriced property market that’s predicated on high levels of consumer spending and an out of control banking system, could mean the implosion of cities like Sydney and Melbourne. Massive investments in property, land and house prices undermines the potential for investment in the real economy.

“Australia has ridden on the back of housing speculation. This buy now, pay later bubble has seen a spike we don’t need.”

Given the country’s disadvantageous geographical location relative to the UK and the rest of Europe, Locantro argues that it’s important Australia develops an industrial base in order to secure revenue through exports and thus stimulate its real economy. This will help offset the impact of any burst bubbles. Locantro predicts property asset value falls in Sydney and Melbourne of between 30 to 40 per cent based on the price to income ratios highlighted above.

Not all experts agree that the burst in the bubble will happen in the real estate sector. Luke McInnes, for example, says while there are valid arguments why Australian property cannot keep going up, he claims it’s a bubble that’s too big to burst and that the pressure valve is going to come elsewhere. 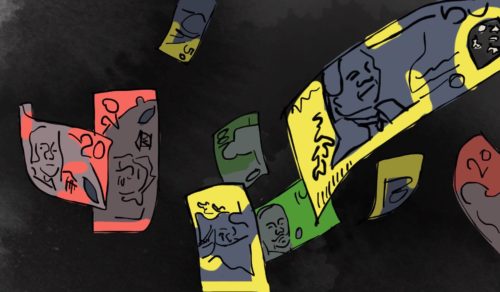 Real Estate commentator, Asher Spira also takes a slightly divergent view. He claims that for most of the past 30 years real estate prices have not only been increasing relative to incomes but they’ve also been tracking fairly closely with the increase in GDP.

Spira says by 2012 the market in Sydney was actually undervalued relative to GDP during which time it began to take off. It peaked five years later and then falls were corrected by the regulators in 2019. Another house price mania followed shortly thereafter which coincided with the election of a former real estate spruiker, Scott Morrison, as PM.

He adds that the 2017 to 2019 correction happened in two stages. The first occurred as a result of the tightening of the property market by regulators. The second happened as a response to the pricing in by the market of a Labour victory in the election. In the event, Labour lost out to the Liberal party led by the former spruiker.

The Australian public made the collective decision to vote against long-term sustainability in favour of a short-term property bull market to enable the correction of a two year long bear. A consistent historical feature of Australian politics has been the extent to which the public have supported the propping up of bull markets and been sympathetic to pro-bull narratives.

This, in turn, has been conducive to the creation of the kind of house price bubbles described and its related negative societal affects, not least inequality and the lack of investment in the real economy. So while it could be reasonably argued that the Australian electorate voted rationally in terms of their wallet, it is also reasonable to argue that by voting against investing in the real economy, they acted irrationally.

As Spira astutely remarked, expecting that people will make the jump from one perspective to the other is a tall order:

“It’s a hard sell intellectually to explain to people that there are situations where sometimes the whole can be better than the sum of its parts”, says Spira.

From the Real Estate commentator’s perspective, the societal impacts resulting from the lack of real economy investment and land price mania has been the shunting of purchasing power from one group to another and the creation of perverse incentives.

“Only about a third of people can actually afford the house that they’re in. In order to maintain a middle class lifestyle there is increasing pressure for both couples to work which is starting to affect the fertility rate. It stratifies your society and starts to displace people. We’re starting to get inequality. You get brain drain. You get all of these awful things in your civilisation.”

The solution to end this, claims Spira, is to ensure that money creation is tightened:

“What I propose is a circuit breaker. If house prices start to look like they’re going to go parabolic, the regulator needs to step in immediately and kerb the mania, not wait years.”