The rise and fall of the property-owning democracy

Ever since the Global Financial Crisis, living standards have split between those who own their own home and those who do not. Inability to find work is no longer an indicator of poverty. In fact more than half of those living in poverty come from a household where someone is in work. The property-owning democracy was meant to make people more conservative, but the rise in home ownership exacerbated the rise in inequality.  What effect its reversal might have on our politics is anybody’s guess. Sometime in the late 1980s, a friend who was on the libertarian right of the Conservative Party explained the idea of the property-owning democracy to me. The point, he said, was to detach the respectable working class from their poorer neighbours, encourage them to identify with the middle-class and thereby turn them into Tories.

It worked for a while. Middle earners had been doing relatively well since the 1970s and home ownership was within the reach of many once mortgages became more readily available. Helped along by cheap council house sales, home ownership rose. In recent years, though, things have started shifting back the other way. The property-owning democracy is now looking like a one-off event rather than the ongoing process it was meant to be. The rise in home ownership exacerbated the rise in inequality. Until the 1990s, the cost of housing only made a slight difference to the inequality figures but from the 1990s, housing tenure became a significant factor in the make up of people’s disposable income and the divide between owners and renters widened.

The recent Resolution Foundation report on living standards goes into this in some detail. As this chart shows, the increase in home ownership gave a further boost to the sharp rise in inequality seen during the 1980s. For those who owned their own properties, lower housing costs helped to increase their disposable incomes. It was a different story for those in social and private rented accommodation. After deducting housing costs, the median incomes for both fell during the recession and have barely made up any ground since. What little pay increase they may have had was soon gobbled up by rising rents. As the Resolution Foundation comments:

The typical mortgagor AHC income is now twice that of the typical social renter, and over the past decade this income has grown by 17 per cent compared to just 4 per cent growth for the typical private renter.

Even more than was the case before the financial crisis, the living standards split between those who own their own home and those who do not has become a key divide.

While the proportion of households owning their own homes has fallen generally, that decline has been sharper among those on low to middle incomes. (Defined by the Resolution Foundation as working-age households with someone in work but with less than the median household income.) In the mid 1990s, over half of those on low to middle incomes were mortgagors. Now that has fallen to a third. Over the same period, private renting among this group rose. Last week’s report on poverty and inequality by the Institute for Fiscal Studies notes that most of those in poverty (defined as income less than 60 percent of the median) are now from households where someone is in work.

[R]elative poverty among children and working-age adults has increased and, over the past 20 years or so, has increasingly become an in-work phenomenon due to declines in worklessness, low earnings growth and widening earnings inequality. It is likely that things will get worse for low to middle earners over the rest of the decade. The Resolution Foundation forecasts that, largely because of the continuing pay squeeze and cuts to working age benefits, the real-terms incomes those in the lower half of the distribution will fall significantly over the next four years. IFS director Paul Johnson made some sharp observations in the Times yesterday.

Poverty is no longer overwhelmingly associated with lack of employment. The majority of those officially classified as poor live in a household where someone is in work. More than four in ten children in families where one parent works now fall below the poverty line.

Another profound change relates to what it means to be in the middle of the income distribution. The incomes of those in the middle are no further behind the top than they were 20 years ago. But today half of middle-income families with children live in a rented property. Less than a third did so in the mid 1990s. With the extension of in-work benefits they are also more reliant than before on welfare. In the mid-1990s both the rich and the middle were generally owner-occupiers dependent on their own earnings. Increasingly the renting, benefit-dependent middle earners have, and perhaps feel they have, more in common with the poor than with the rich.

Which, of course, was precisely what the property-owning democracy was designed to stop. Aspirational working class people were supposed to identify with those further up the income scale, not those further down. But the rise in the proportion of home owners soon petered out. Council house sales didn’t create a home-owning democracy. When those who bought sold out and retired, the buy-to-let barons moved in. Those who might have owned twenty years ago now rent from private landlords and benefit dependency is no longer confined to the very poor.

The property-owning democracy was meant to make people more conservative. What effect its reversal might have on our politics is anybody’s guess. Combined with the impoverishment of those in the lower half of the income distribution, it might lead to less reverence for property and more demands for its taxation or for laws protecting tenants from landlords. If those on middling incomes really do make common cause with the poor, politics could get very interesting. It’s certainly not what the Conservatives of 30 years ago had in mind. 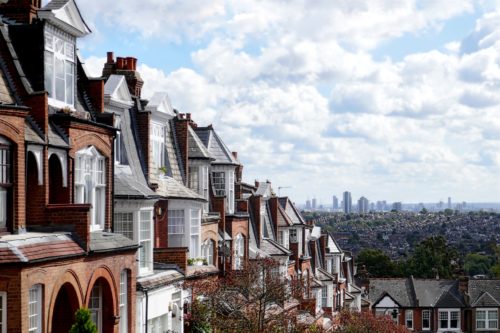