On the 12 February, 2018, I tuned into Classicist Mary Beard’s Julius Caesar Revealed (BBC 1), an engaging and often entertaining story of Rome’s greatest leader and his legacy. Predictably, Beard drew comparisons with Donald Trump and ostensibly formal dictators such as Vladamir Putin and Kim Jong-UN.

A key focus of the programme was Beard’s evaluation of the military might, populism and public relations that Caesar pioneered after he took power in 49 BC. Caesars political spin most famously immortalized in the phrase “veni, vidi, vici” has been the template for political domination down the centuries. Prime Minister Theresa May’s banal “strong and stable” rhetoric is a modern manifestation.

Beard told us how, at the peak of his power, Caesar had to have a slave whisper “remember you’re a man” in his ear during his most god-like moments of triumph to remind him of how psychologically corrupting the notion of absolute power can be to those who abuse it.

As a politician who clearly believes her birth right is to rule, one wonders whether May had a fawning Downing Street mandarin whisper “remember you’re a woman” into her ear following the last General Election result. 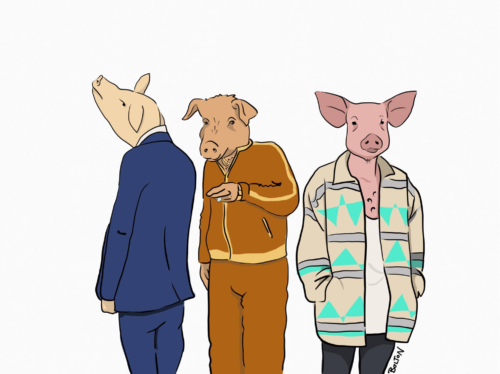 The insidious nature of power

Regardless, the constitution of the early republic of Rome that gave a monopoly of power to a hereditary elite of ‘Patrician’ families, appears to be the model of governance May aspires to.

It was the PMs typically condescending robotic tones and illusions of grandeur during a recent TV political broadcast that led a commentator on Twitter to astutely remark:

“I found this political broadcast scary it’s like a polished filtered negative film of a dictator who wants to come across glowing and purist.”

May’s sense of her apparent entitlement to rule indefinitely has become a feature of her style of leadership, especially since her minority government were forced to do a deal with the far-right DUP to enable her to cling to power.

Evidence of May’s authoritarian streak started to appear way before the last election.According to Politico:

“The string of departures from Number 10 has been linked to May’s highly controlled leadership style. Government officials frequently report that power over government messaging and media strategy is heavily concentrated in the hands of ‘the chiefs’… and that more junior members of staff have limited freedom to operate.”

The PMs control freakery was further underlined by what political commentator Ash Sarkar, described as “a moment of short-term political opportunism which actually has potential catastrophic affects in terms of a concentration of power in the executive.”

An illustration of the PMs autocratic style, was perhaps best highlighted by constituent, Louise Trethowan, who related a fifteen minute encounter she had with May at her constituency office in Maidenhead.

“For me, it was an excellent opportunity to put all my fears – and the concerns of the 48 percent – to the woman who will lead us towards the Brexit cliff edge. I expected… her to present some strong arguments that would counter my own.”

But what she witnessed was a rude, aggressive and finger-pointing individual who was unable to hold an argument.

“She [the PM] seemed petulant, defensive, tired and rattled… If the Prime Minister is so easily angered how on earth is she going to be the best negotiator for Brexit? I fear she will lose her temper and start jabbing her finger at people.”

Enemy of the people

May’s petulance and intellectual paucity is symptomatic of her alignment with a hard Brexit-supporting, foreign-owning billionaire mass media class and their political conduits in Westminster who view an independent judiciary as the “enemy”. This, and her projection of hard power, represent a form of totalitarianism that is essentially hidden from the public.

May’s notion of a post-Brexit Britain is predicated on a ‘humanitarian interventionist’ notion of hard power. In short, on military pre-emption or, as one US administration official put it, “pre-emptive retaliation”.

Such a foreign policy strategy is one in which the ‘responsibility to protect’ is informed by a notion of imperialist exceptionalism couched in the language of economic liberalism and free markets. This is regarded by May as the best way to counter (largely imaginary) military threats.

Thus, in the tradition of Kipling, May emphasized in a speech in November, 2016, that the historic role of Britain was to nurture ‘less enlightened’ societies by invoking in them the virtues of neoliberal ‘trickle-down’ economics.

“Liberalism and globalisation…underpin the rules-based international system that is key to global prosperity and security and which I am clear we must protect and seek to strengthen”, she said.

The alleged merits of a 19th century rules-based liberal system rooted in modern international relations, was a topic May was to return to. The PM proclaimed:

“So as we reach out into the world and write this new chapter in our national history, the task of a global Britain is clear – to defend the rules based international order against irresponsible states that seek to erode it.”

Clearly, May had Russia in mind as one of her “irresponsible states”. In alluding to Russia’s potential for reining in UK-US global ambitions, May stated:

“The comprehensive new economic partnership we seek will underpin our shared commitment to open economies and free societies in the face of those who seek to undermine them. Chief among those today, of course, is Russia”, she said.

“Russia’s illegal annexation of Crimea was the first time since the Second World War that one sovereign nation has forcibly taken territory from another in Europe.”

May’s simplistic analysis conveniently overlooks the subversive actions of the U.S in the Ukraine and broader geopolitical and strategic contextual objectives of the Western-led alliance which meant that Putin was left with little option other than to incorporate Crimea in order to attempt to fend off an encroaching NATO.

Also, by limiting her critique to Europe, May ignored the attempts by Britain, France, the US, Israel and Saudi Arabia among others, to destabilize Syria in addition to the U.S-led coalitions decades-long illegal wars of aggression against the sovereign nations of Iraq and Libya.

May’s anti-Russian tirade during the latter part of her speech culminated in what were clear threats against Putin – an arrogance akin to that of a 19th century imperial overseer. Seemingly eager to continue justifying the augmenting of the British industrial-military complex, May added to the fear mongering rhetoric:

“The UK will do what is necessary to protect ourselves, and work with our allies to do likewise”, she said.

That it’s Britain and it’s NATO allies, not Russia, that represents the greatest potential threat to world peace, is quietly overlooked by May and is, of course, unmentionable in mass corporate media parlance.

All political opposition to May’s Russophobia and the wider official state sanctioned narrative that it represents, is regarded by the establishment as ‘fake news’ which has to be controlled.

Hence we had the charade of May’s latest speech in which she intoned that any disrespectful questioning of the political class will be regarded by her government as a new crime of “intimidation of candidates”.

In rather Orwellian fashion, May’s stated commitment to freedom of speech that she made during her public address, is contradicted by her plans to further undermine it.

Theresa May’s authoritarian instincts should be a worry to us all. However, her imperialist worldview and limited political imagination, is not restricted to the party she heads, but is indicative of an ideology rooted in an aristocratic sense of self-entitlement and the consolidation of elite class power.