Further reading: The Biggest Crash Of All Time 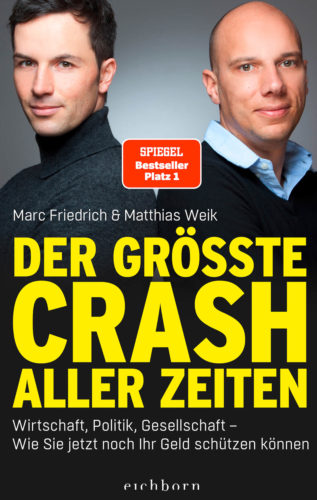 Here’s an idea… Let get 28 counties with differing economic output and bind them all together into a single economic union. Once they are tied together we will then enforce 19 of those countries to use a single currency regardless of their economic differences.

Then we’ll create a central bank to implement bungling monetary policy that papers over all the deep structural economic issues we’ve created so we can keep companies and economies on life support.

Host Ross Ashcroft travels to Kakanomics – the leading economics festival in Norway – to talk to the renegade economist Matthias Weik about the Zombification of Europe.

In George A. Romero’s cult classic 1968 film, Night Of The Living Dead, a rural Pennsylvanian farmhouse is besieged by a large and growing group of mindless, rotting “living dead” monsters who shuffle with their arms stretched out in front of them, devouring the flesh of their victims. The film, which was notable for being the first to depict zombies as reanimated cannibalistic cadavers, also helped Hollywood popularize, sensationalize and ultimately misrepresent the Vodun religion (popularly known as voodoo) from which the zombie genre was based. Film historian Linda Badley explains that the film was so horrifying because the monsters were not creatures from outer space or some exotic environment, “They’re us.”

Witnessing young people’s engagement with the fake Instagram world and their look of possession, emptiness or zombification as they stare for hours on end into smartphones and iPhones, it is hard to disagree with Badley’s observation. Renegade economist and author of The Greatest Crash, Matthias Weik, takes the concept one stage further. What if zombification can not only be explained psychologically, but also as a means by which companies and governments throughout vast swaths of the world that have implemented neoliberal policies, are able to paper over deep structural cracks of a failing economic system?

The solution to the financial crash of 2008 was deemed to be the printing of more money. “We all thought that we can make the world go round much faster by printing money. But then there’s a guy in Zimbabwe who tried that as well, Robert Mugabe. If the system would be so great and if the idea would have been so great, he would be the richest man in the world and Zimbabwe would be the richest country in the world. And think about it. It’s not the case”, says Weik.

So the policy of printing more money has failed to address the underlying structural problems which beset regions and countries such as Britain, Japan, the United States, South America and even China. “The latter”, says Weik, “have got a massive shadow banking system.”

Rising economic inequality in society is indicative of the fact that the growth in printed money has been ‘quantiatively eased’ – disproportionately – into the pockets of those at the top of the socioeconomic pyramid.

Another consequence of the policy has been the creation of a massive stock market, government bond and real estate bubbles underpinned by increasing private debt.  The Central Banks have merely kicked the can further down the road. Far too low interest rates within the nations of northern Europe and far too high interests rates within the nations of southern Europe – most of whom are tied to the Euro – have compounded the problems.

Getting what the people deserve

In Weik’s view, it’s not always the politicians who are to blame for this state of affairs. His general thesis, in a nutshell, appears to be that the public get the politicians and the system they deserve. “With the euro, we keep Zombie nations and Zombie companies alive like in Italy and Greece which would be bankrupt without the euro”, says Weik.

These Zombies are kept artificially alive as a result of the pumping of capital from productive to unproductive places. Thomas Cook is an example of UK Zombie company which existed against a backdrop of low sustained interest rates. Europe is heading in the direction of interest rates between minus 4 and minus 5 percent. These kind of rates will be widespread and Weik predicts that people will have difficulty paying for goods and services in cash. In addition, the value of money invested in banks will logically decrease over time. But in such a scenario people are unlikely to be allowed to withdraw large sums in order to offset the value of their depreciating currency.

According to Weik, there is zero possibility that the newly appointed president of the ECB, Christine Legarde, will reverse these policies. “She’ll do everything to keep the euro alive.”

The ECB is unforgiving in terms of its policy strategy towards the economically weaker countries within the Eurozone who are indebted to it.

The experiences of Greece and Germany is a classic example of where the narrow political interests of the rich override economic pragmatism beneficial to the poor.

The economic conditions Germany imposed on Greece were such that it became impossible for the latter to repay the former. And yet Germany’s former finance minister, Wolfgang Schäuble, continued with the policy because he couldn’t be seen as rowing back on his decision in the eyes of the German electorate who essentially convinced themselves that black is white – a notion that supports Weik’s contention that the public get the politicians and economic system they deserve.

In a Zombified world where both objective economic and societal reality have been subverted, the idealized fantasy world of Instagram and the ‘never-never’ of credit- free money, are concomitant illusions – the one feeds seamlessly into the other. Until the public at large begin to address these dual problems, rather than ignoring them, they’re likely to increasingly bigger. “My greatest fear”, says Weik, “is that we lose democracy…But we should not believe in politicians. Change always comes from people…We are voting every day and we don’t even notice it. We’re voting with our money….If we said, ‘no this company does not pay tax, or it pays just little tax in Luxembourg’ and we don’t order online anything, they will change very quickly…The most important thing is for people not to buy things they can’t afford and not to buy expensive flats and houses because the money is so cheap. This will not work out. And then we have to think on a wider scale. We need a movement to force our politicians to tell us the truth.”