When the major economic crisis in 2008 hit, few people could have imagined that twelve years later a global virus would result in the locking down of vast swaths of the world. Arguably even fewer people could have contemplated that the heart of the capitalist beast, New York, would be ill equipped to deal with the humanitarian fall out gripping its neigbourhoods.

What the onset of the Corona virus has exposed is the vulnerability of a US economy in crisis. Two of America’s greatest economists, professor, Richard .D. Wolff, and professor, Michael Hudson joined Renegade Inc host, Ross Ashcroft to discuss this turn of events and where America is likely to be heading in the near future.

According to professor Wolff, the Corona virus epidemic is indicative of one trigger point among many of a capitalist system at the point of collapse. In early 2000 its structural deficiencies were blamed on the dot com crisis. Then in 2008/9 it was the sub-prime mortgage crisis that took the brunt for its inherent failings.

Wolff uses the metaphor of a train heading at speed towards a wall to describe what is happening. The impending tragedy is avoidable but policy-makers and politicians are willfully continuing with their destructive course in the certain knowledge that the economic crisis will be quicker and bigger next time around.

The economist cites the lowering of interest rates and the pumping of vast amounts of money into the economy by the US and UK monetary authorities to illustrate his point. Every player in the capitalist system –  corporations, governments and the mass of the population – are, through the borrowing of cheap and unlimited  money, invited to solve any and every economic problem without consequences.

The results are the kinds of rising debt levels built into the existing system that have no bearing on the real economy. This explains the disconnect people feel between what the media tell them is an economy in recovery and the reality of what they experience in their daily lives.

While the destructive impacts of capitalism on the real economy are barely discussed, there will almost certainly come a tipping point beyond which the cracks in the system become irreparable. Perhaps with the Corona virus epidemic this point has been reached.

Wolff says that “no matter what our politicians do, the people are slowly learning that a system that works to produce the crashes of 2000 and 2008/9 is a system whose time has come and now gone.”

With all of capitalism’s tricks having been laid on the table, and with the emperor having been exposed without any clothes, a politician like Trump has very little wriggle room in terms of being able to present to the American people an establishment-friendly solution to the ongoing crisis. The alternatives are stark. With capitalism on its knees, it would appear that the choice the public is faced with – socialism or barbarism – is arguably more relevant now than at any time since Rosa Luxumberg wrote her famous words. 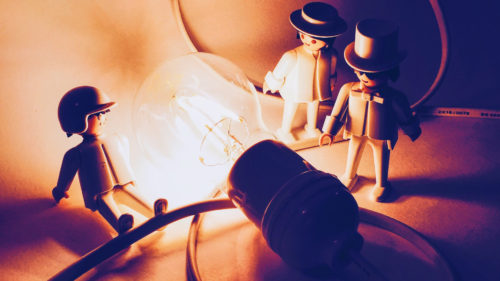 Although the American and British public are led by right wing politician’s who not only portray themselves as their champions, but appear determined to continue in the four decades-long general direction of travel towards fascist barbarism, the lesson of history is nevertheless one in which dramatic shifts have happened in the other direction. As Lenin famously said: “There are decades where nothing happens; and there are weeks where decades happen.”

Recurring crisis within a system whose mask has been lifted, would suggest that the latter is not only possible but likely. Professor Wolff seems to concur. “Capitalism”, he says, “is a systemic problem and that one or another variety of what we all call socialism is where we have to go.”

Rejecting the just in time pill

The challenge for progressives is persuading the mass of traditional blue collar workers who have swallowed the populist Trump pill to reject the kind of corporate management philosophy taught at business schools that underpin it. As Michael Hudson points out, the philosophy is centred on the Wal Mart theory of ‘just in time’ inventory control.

The spread of the Corona virus throughout New York where Hudson is based, is indicative of how this theory is playing out. It’s a theory that doesn’t account for unexpected events of a human magnitude where contingencies need to be in place to ensure, for example, that a sufficient amount of ventilators are made available to the public during pandemics where there is a spike in demand for them.

In fact, as Hudson notes, the just in time philosophy is guaranteed to create a rolling crisis within the public sector. It will turn the American economy into what the economist describes a grab bag for private capital.

“The measure of Donald Trump’s success will be how he can recover the economy, by which he means the stock and the bond market”, says Hudson.

Bailing out a collapsing empire

Under the pretext of the Corona virus aid bill, large corporations and banks look set to be bailed out to the tune of some eight trillion dollars by American tax payers. Only two trillion will be set aside for the real economy and the people.

“Five trillion will be given to the banks to lend the money to the large corporations to buy out the small companies that are going to go under as a result of the slowdown and the austerity resulting from the three months of a closed down economy caused by the Corona virus. It’s not simply the closing down of economy. The real economy is going to be sacrificed to the financial sector”, says Hudson.

The economist predicts that the US economy will end up similar to Greece’s. Banks, he says, will recoup some of their losses to large corporations who will buy out all of the small businesses that are going under. The end result will be the increased consolidation of oligarchical power in the US not dissimilar to the experiences of ancient Rome and Greece prior to their respective collapse.

The American Empire will end in the same way that it’s counter part in Rome did. “In Rome, we had a dark age. And we’re going to be entering something like that at the end of the summer in this country because you’re going to have many homeless pouring onto the street, many families losing their homes, small businesses who’ve had to go under, medium sized businesses that have just decided to sell out to the large private capital funds. And the economy is not going to look very pretty”, says Hudson.