We are living in weird and terrifying times, and people want straight answers. But the conspiracy of obfuscation which pervades government and business has resulted in the global collapse of public debate and shared understanding, writes Rupert Morris. 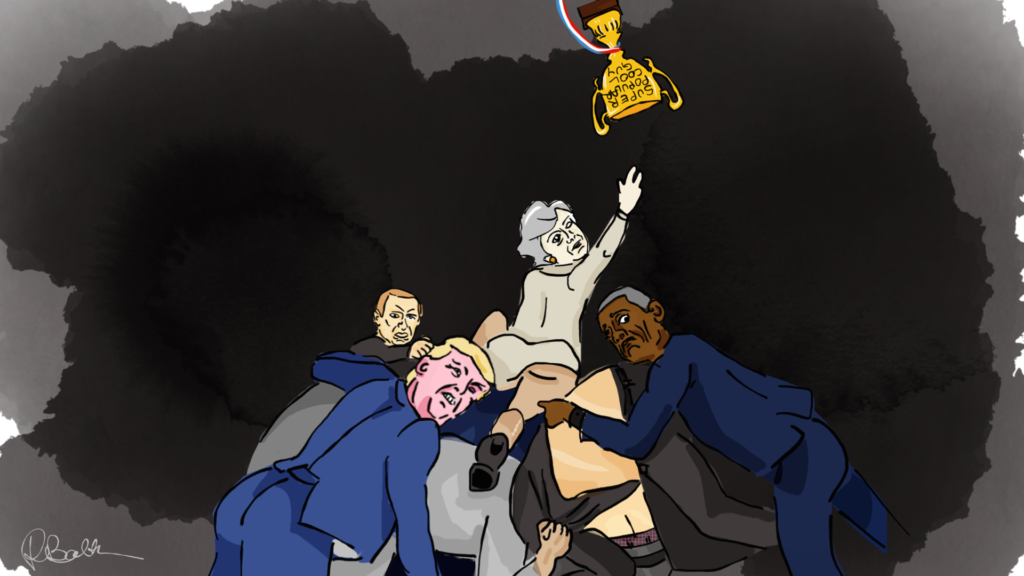 For lovers of language, the early part of the 21st century may come to be perceived as the Dark Ages of the English-speaking world. How else to describe a period when such a profusion of communication channels has coincided with such an extraordinary collapse in the standard of public debate and shared understanding?

Historians will surely seize on phrases like “fake news” and “alternative facts” as evidence of the terrible confusion spread by the enemies of objective truth. Sociologists might study the peculiar development of the word “like”. Not only has this word made itself both ubiquitous and anodyne in everyday conversation – “I was like… and she was like… and so we went, like…”. It has simultaneously acquired an extraordinary importance as the ultimate status symbol. How many likes did you attract on social media, and can you live with yourself if you didn’t get enough?

For better or worse, the words we use say an awful lot about us. This is not confined to politics – or teenage conversation, or social media. Why should we be surprised at the preposterous pronouncements of Donald Trump? Britons have been recently been comprehensively deceived by successive prime ministers. David Cameron called an unnecessary referendum purely in an attempt to keep his party together – which, in a curious twist of fate, he managed to achieve while securing the result he least wanted and losing his own job in the process. Theresa May called an equally unnecessary General Election simply because she saw it (wrongly) as a golden opportunity to secure a solid majority while her opponents were in disarray and the bill for Brexit did not yet have to be paid. In each case, weasel words like “national interest” and “the people’s right to choose” were invoked to justify a political gambit whose true motivation was purely partisan.

One may observe the newly elected French president Emanuel Macron with rather more interest, and it was encouraging that his rational approach seemed to triumph over the anger and prejudice displayed by his opponent in the final presidential debate. But I shan’t be holding my breath. It seems to me that politicians will always be tempted to abuse language, and will frequently yield to that temptation. The consolation is that they usually get rumbled in the end.

So where should we look for enlightenment? To philosophers, perhaps? Alas, this is equally unlikely, for reasons that the philosopher Bryan Magee memorably explained in an article published in Prospect magazine a few years ago:

“Many philosophers will never write clearly,” wrote Magee. “They are incapable of it, because they are afraid of clarity. They fear that if what they write is clear, then people will think it obvious. And they want to be thought of as masters of the difficult.”

This observation seems to me to apply in so many other walks of life. Substitute the words “economists”, “public administrators” or “management theorists” for “philosophers” and see if those words ring true. Don’t most of them long to be perceived as masters of the difficult? More mundanely, don’t they all just want to sound important?

I still treasure this sentence written by one management consultant to another to describe a task he and his colleagues had performed for a client:

This sentence, despite its utter meaninglessness, reveals the thought processes – subconscious for the most part – of people who work at this supposedly elevated level in business. Like the second-rate philosophers exposed by Magee, they lack the confidence, and possibly the ability, to express ideas clearly. So they reach for abstractions. Abstraction cannot be disproved, they think, so if we restrict ourselves to these, no one will ever rumble us.

This is how people routinely use language in business and in public administration. Everything must sound more complex and more important than it is. Nothing is ever caused by anything else. It must be driven. Nothing is affected; it must be impacted. You should never use something; you should leverage it.

Just a few weeks ago I was working with an American financial services client trying to promote the benefits of inclusion and diversity. In one of their presentations was a PowerPoint slide including the following sentence:

Leverage high touch channels (such as in person interactions) to engage and connect colleagues whenever possible.

After some discussion, we translated this as: Keep talking and listening to your colleagues.

The revised version may be simple, but it has the virtue of being intelligible and perhaps even motivational. My client entirely accepted my point. The word “leverage” is now discouraged at this particular organisation.

There is a conspiracy of obfuscation that pervades business every day, and is often reinforced in business schools. But it will never completely carry the day for the simple reason that it often doesn’t work. The kind of pretentious and self-important language I have highlighted is both inappropriate and dangerous – like using a bread-knife to open an oyster. And the biggest danger of all is that it gets us out of the habit of thinking clearly.

Fortunately, there are still customers who want straight answers, people who want clear explanations and people who will occasionally challenge pretension. And there are champions of clarity in every walk of life.

In business, we have the great investor Warren Buffett, a sworn enemy of “corporate-speak”.

From the world of science, we have Albert Einstein insisting: “If you can’t explain something simply, then you don’t understand it well.”

And from the world of theatre, I draw great comfort from two paragraphs in Tom Stoppard’s play The Real Thing.

“Words,” says Henry, the main character, “are innocent, neutral, precise, standing for this, describing that, meaning the other, so if you look after them you can build bridges across incomprehension and chaos. But when they get their corners knocked off, they’re no good any more.

“I don’t think writers are sacred,” he continues, “but words are. They deserve respect. If you get the right ones in the right order, you can nudge the world a little or make a poem which children will speak for you when you’re dead.”

Language is misused every day, and the explosion of social media, along with the rise of political populism, has made it more difficult to sort the wheat from the chaff. But we will emerge from these Dark Ages. Mark Thompson, the former BBC Director General and current Chief Executive of the New York Times, published a book last year entitled “Enough Said – What’s gone wrong with the language of politics”.

At the end of his thoughtful analysis of modern trends in public debate, he concludes: “Sooner or later a new language of reasonable persuasion should emerge. We just don’t know when. So what can you do in this long uncertain interim? Open your ears. Use your own good judgment.”

I would add: “… and call out the obfuscators.” They get away with it as long as we allow them to. In so many walks of life, people are allowed to sound important and say very little. Challenge them, and they will either shrivel or prove capable of better. No one likes to be called a charlatan or a liar. And everyone hates to be thought pretentious.

Founder and Chairman at Clarity
Rupert advocates clear communication, without cliché or jargon, in a world that has been hijacked by corporate-speak and jargon.

As a former reporter for The Times and The Daily Telegraph, he has always believed in "capturing key learning takeaways". In other words, he likes to find out what’s really happening.

Besides contributing to the likes of the Financial Times, Rupert is the author of two paperbacks: The Right Way to Write (Pikatus, 1999) and Business Writing (Orion, 1999). He published his first book, 'Tories – a political sketch' in 1991.

3 thoughts on “Call Out the Obfuscators”