You own yourself, and by extension you own what you make through labour or voluntary transactions thereof. Land, however, is not a fruit of labour.

One might reasonably suppose that land, being unlike other things that are called “property,” would have special economic characteristics. Classical economists recognized this to be the case, and spoke at length about the implications of it. Neoclassicals and their Austrian copycats insisted on lumping everything together under the solitary label of “property,” which served to obscure these implications. They simply bicker about how best to achieve equilibrium and Pareto efficiency, given value-free analysis of the system that exists. Some might call that dispassionate analysis; others might call that bean-counting for elites.

Unlike the priesthood of the status quo, I am interested in making moral judgments about the system we live under. I am not talking about a revenue model. I’m talking about a revolution: a revolution of liberty, of prosperity, of human relationships and ecological relationships.  We can eliminate taxes and debt, poverty and special privilege. Contrary to the dour pronouncements from the curators of the dismal science, we can have it all.

The Basic Properties of Land

In terms of political economy, “land” refers to access rights over everything that was here before us humans. When you buy land, what you are really buying is a bundle of rights, be they air rights, mineral rights, drilling rights, surface rights, spectrum rights, right of way, you name it. Such rights are necessary for all production, and even life itself.

“Supposing the entire habitable globe to be so enclosed, it follows that if the landowners have a valid right to its surface, all who are not landowners, have no right at all to its surface. Hence, such can exist on the earth by sufferance only. They are all trespassers.” Herbert Spencer, Social Statics

That is a simple illustration of the absurdity of the current system, when taken to its logical conclusion. Indeed, we aren’t far from that.
When land is made into a commodity, the progress of society, be it in terms of productivity, philanthropy, or the rule of law, tends to be encapsulated in land values.

“…every improvement in the circumstances of the society tends either directly or indirectly to raise the real rent of land, to increase the real wealth of the landlord, his power of purchasing the labour, or the produce of the labour of other people.” Adam Smith, Wealth of Nations

So the community as a whole is what generates all this value, and yet the windfall gains accrue only to the holders of these access rights. In fact, under feudalism land titles were the root of noble privilege, and although we have left behind the aesthetic trappings of feudalism, we have yet to be rid of the core component. That means in practice the payments which can be demanded for these access rights are not like other sorts of payments.

“Moreover, wages and interest, when there is no rent, are regulated strictly by free competition; but rent is a monopoly-charge, and hence is always “all the traffic will bear.” Albert Jay Nock, Henry George: Unorthodox American 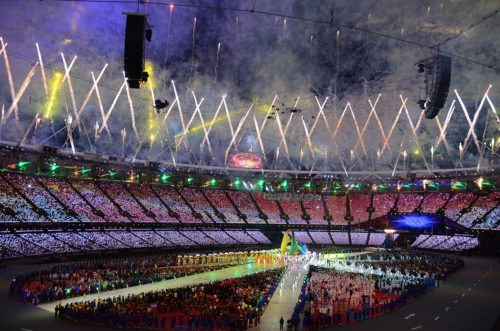 Who Are The Real Olympic Winners?

Essentially, when private individuals get to levy a charge on others for the mere privilege of existing on the planet, this creates an endemic state of poverty for large masses of people. Just as land titles are the essence of noble privilege, so it follows that landlessness the essence of serfdom.
It is through this logic that David Ricardo debunked Thomas Malthus’s “Iron Law of Wages.” He developed his own “Law of Rent” to show that when the produce obtainable on the best available rent-free land (the margin of production) is high, wages will also be high since everyone’s next best alternative to wage labor is improved. When Malthus and Ricardo were debating, the Old World was all built up and many people were living in Dickensian squalor. Yet, the New World of America had lots of free land, and it witnessed growth rates comparable to those of China today. Unemployment wasn’t even part of our vocabulary. True, many homesteaders did not have an easy life, but everyone who was willing and able to work could simply go work. Why is that no longer possible?