I dread this time of year. It’s virtually impossible to turn on your TV or listen to a radio phone-in programme without seeing or hearing the political and corporate media class encouraging us of the need to buy and wear a red poppy.

We are also reminded of the hard sell by a broadcast media who feel compelled to wear a poppy on camera. Public figures and TV presenters who choose not to wear a poppy are derided and face censure, indicative of what has become known as “poppy fascism”.

Rather than being a somber commemoration to all those who sacrificed their lives during the First World War, and an expression of the futility of war in general, the period leading up to Remembrance Day is instead an undignified, jingoistic and ostentatious corporate media spectacle, a propaganda exercise in public relations through which the ruling class exploit the compassion people feel to justify present and future wars.

The attempt at co-opting the suffering of past conflicts in this way is best illustrated by the slogan of the Royal British Legion (a leading “charity” who organise the annual poppy appeal) “Shoulder to Shoulder with all who serve”. 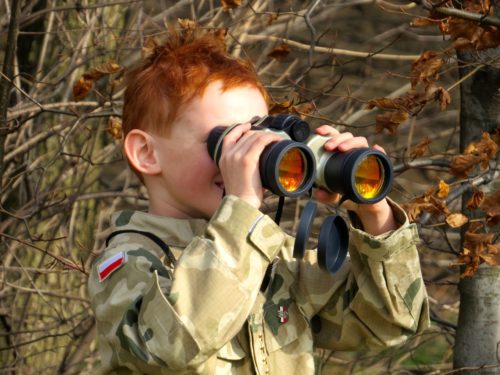 Are Your Kids At War School?

The Royal British Legion whose philanthropic poppy appeals ostensibly raise money for men and women who ‘serve the country’ in conflict zones, is sponsored by both Lockheed Martin, the world’s largest arms’ company, and BAE Systems, the UKs biggest arms dealer. This is largely hidden from the public in much the same way that there is a lack of transparency and public accountability in the activities of the Foreign and Commonwealth Office who help administer the Conflict, Security and Stability Fund and the Jo Cox Fund.

Independent journalist, Aaron Bastani, was widely lambasted by the establishment media for simply pointing out the fact that the current model of charity does not help Britain’s veterans, at least 13,000 of whom are homeless. Bastani pointed to the clear correlation between the worship of the poppy, the commercial and financial success of the Royal British Legion (income £150m+) and the plight of homeless UK veterans.

Charitable organisations like the Royal British Legion provide a useful means by which the ruling class is able to divert public scrutiny away from their scrupulous activities for purposes of propaganda. The normalization of this ‘conscience washing’ strategy has resulted in the sustained growth of the non-profit sector which, paradoxically, has gone hand in hand with rising socioeconomic inequality. This is illustrated by the fact, for example, that the richest people in the UK have increased their wealth by 183% in 10 years. A decade ago, the wealthiest 1,000 people in Britain had combined wealth of £256bn. The same cohort now sit on £724bn.

The richest people in the UK have increased their wealth by 183% in 10 years.

Not only is the growth of the non-profit sector associated with rising inequality but, as the Urban Institute has confirmed, it’s also linked to sustained economic growth which now exceeds that of both the business and government sectors. It’s a massive business, with approximately $316 billion given away in 2012 in the United States alone and more than 9.4 million employed.

Peter Buffet, the son of billionaire philanthropist, Warren, has commented on the mutually interdependent and contradictory nature of a socioeconomic system powered by philanthropy: “Because of who my father is, I’ve been able to occupy some seats I never expected to sit in”, he said, adding, “Inside any important philanthropy meeting, you witness heads of state meeting with investment managers and corporate leaders. All are searching for answers with their right hand to problems that others in the room have created with their left.”

The economic and political propaganda power that charities are able to wield in the right ideological hands nullify the potential for socioeconomic justice outcomes. This is played out daily with regards to the excessive amount of time devoted to day-time TV commercials that promote the non-profit charity sector whose chief motivation is to maximize profit. “I now hear people ask, ‘what’s the R.O.I.?’ when it comes to alleviating human suffering”, said Buffet. This is what the penetration of the market by philanthropy means.

“I now hear people ask, ‘what’s the R.O.I.?’ when it comes to alleviating human suffering”, said Buffet. This is what the penetration of the market by philanthropy means.

One of the most prominent philanthropic based TV commercials to have penetrated the market over recent months is Save The Children’s Yemen Appeal, fronted by comedian and Tony Blair supporter, Eddie Izzard, the ostensible aims of which are to help alleviate the humanitarian crisis in the country. Izzard plays on the heartstrings of a daytime audience comprised of mainly pensioners, students and the unemployed, imploring them to contribute money to the cause.

Interestingly, both Izzard in the TV commercial and the charity on its website fail to mention the Disaster Capitalism inflicted on the country by Britain and its allies – the US and Saudi Arabia. Neither do they mention the fact that BAE Systems supplies the latter regime with the bombs that rain down on the people of Yemen.

Another example of the politicization of charitable organisations and their penetration of the market, is within the cultural sphere. Citizen journalist, Alex Tiffin on twitter highlighted the extraordinary number of national charities linked to the UK governments Department of Work and Pensions (DWP) as evidenced by Tory DWP under secretary @JustinTomlinson‘s twitter timeline. “What [the timeline] shows is the horrifying number of national charities that the #DWPhave under their thumb”, he said.

Integrated into the capitalist system

The notion “charitable” organisations have been integrated into the broader capitalist system whose business models are effectively no different in principle to that adopted by the likes of Apple and Amazon, is unmentionable in corporate ‘mainstream’ media parlance. Rising inequality, sustained economic growth and the illusions associated with the non-profit charitable sector are, as Dr Bob Gill shrewdly remarked in relation to the NHS, indicative of the “shredding of the social contract between public servants and the state”.

As far back as 1978, Australian social scientist, Alex Carey pointed out that the complex interplay between the non-profit sector, the state and capitalism are integral to both the development of liberal democracy and the means by which it is protected by the kind of propaganda defined and theorized by Edward Bernays almost a century ago.

Ultimately, ‘conscience laundering’ that legitimizes the kind of philanthropic colonialism it helps foster is a problem that is unlikely to be tackled by national governments’ that have never recognised, in any serious way, the need for the said problem to be tackled. They instead prefer to perpetuate the illusion that the ‘Good and the Great’ from above will provide humanity with its salvation.

As long as the masses continue to react passively to the penetration of the non-profit sector into a market system premised on a self-obsessed culture guided by narrow short-term economic interests, the ruling class will continue to perpetuate the ‘charity is virtuous’ illusion even if this eventuality entails catastrophic social and environmental costs. “For charity cannot right a wrong; only justice can do that…Charity is false, futile, and poisonous when offered as a substitute for justice”, wrote Henry George.

For charity cannot right a wrong; only justice can do that…Charity is false, futile, and poisonous when offered as a substitute for justice.

Albert Einstein once said that you cannot solve a problem with the same mind-set that created it. The notion that capitalists offer the solution to the problems of society – rising inequality, poverty and environmental degradation – through the prism of charity, is arguably the greatest illusion of all.