Are Your Kids At War School?

More and more courageous veterans are returning from conflict questioning whether their service and sacrifice were worthwhile. At the same time, ever younger children are being primed to collude in the increasing militarization of UK society.

So, how is the military still able to persuade Britain’s young people to sign up when they are confronted with the brutal realities of war?

Host Ross Ashcroft is joined by filmmaker Mic Dixon and coordinator of Forces Watch, Emma Sangster, to discuss if perpetual war is really what we want for future generations.

The subtle manipulative ways in which the military are able to recruit cannot be separated from the broader societal and historical context. In Emma Sangster’s view, militarism is woven into the fabric of British society:

“I think it’s important to kind of start with the sort of basic understanding that in some ways we are quite a militaristic society [and that]…our involvement in war and preparing for war [is]…a big part of our history”, she says.

“I think what we’re seeing now is that there’s been what we kind of call a new tide of militarism where there’s been a concerted effort to promote the interests of the military in the last 10 years or so for particular reasons to do with recruitment [and] public support of the armed forces. This has had a ripple effect feeding out into lots of areas of society including recruitment.”

In order to continue to attract recruits to the armed forces against a backdrop of increasing public resistance to militarism and the complex issues that surround it, the establishment is forced to be increasingly creative with regards to their promotional advertising drives. Sangster acknowledges that young people today are more knowledgeable and ask far more critical questions than previous generations.

Consequently, the establishment are having to increasingly reach out to the Commonwealth as a new target market. The armed forces are constantly looking for new ‘seductive’ ways, through advertising, to capture the hearts and minds of new generations of potential recruits. The marketing techniques used are incredibly sophisticated.

“The idea being promoted is that recruits can fulfill their dreams of being an engineer in the RAF, for example, without thinking through what the RAF are actually involved in, what they are doing and what the recruits work contributes towards.” 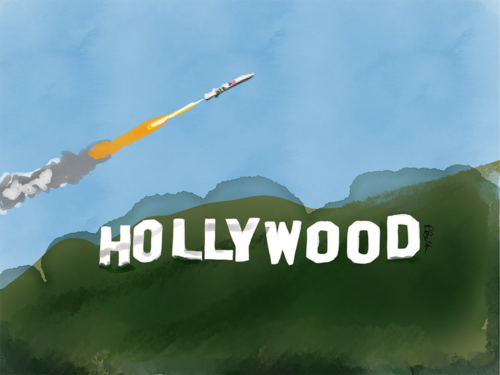 How Hollywood promotes war on behalf of the Pentagon, CIA and NSA

“None of the [advertising] recruitment materials goes into that aspect and you have to rely on a wider social debate to understand those things….One of the problems is that the sort of target audience – the 16 to 24 year old age group [who] are targeted with pre recruitment messages – don’t necessarily understand that complexity and the context in which…this dream job would be occurring.”

The advertising is aimed at children and young people because that’s where the recruits are going to come from. The advertisers reinforce what young people want to hear, getting to messages that resonate in terms of group dynamics and being the best you can for your family and country.

Filmmaker, Mic Dixon, whose film, ‘War School’, critiqued this kind of marketing strategy, uncovered research that indicates children as young as two or three years of age are being “introduced to playing with guns at days out at the fair with real guns by the military.”

Dixon reiterates the fact that very young, malleable and impressionable minds are targeted:

“Under the guise of a kind of alternative to history lessons [recruits have participated]…in the reenactment of a dragoons firing muskets”, says Dixon, adding, “A child who is about two and a half to three years old looked up at this soldier in his red coat and said, ‘Why do you need it?’ And he said, ‘Oh we need them so that we can tell you what history was like and what the people wore 200 years ago so you don’t need your history books.”

For Dixon, who has made films about these kinds of issues since the first Gulf War, this was the point the filmmaker thought ‘enough is enough’ and felt he had a moral obligation to do something. It is the issue of targeting children that specifically caught Dixon’s attention:

“I’d been in the cadets myself when I was at school in the 60s and I loved it”, recalls Dixon. “I often look back at one of the best weeks of my life was being at RAF Linton-on-Ouse with a CCF camp. We flew in planes, we fired guns, we played football in the biggest hangar you could imagine….I was 14 or 15. It was fantastic.”

“A year later I cottoned on to the Vietnam War and – along with a few other people at the time – we just pulled out, we resigned and got shouted at by the headmaster weekly. One of the strongest memories I have at school was standing in the dinner queue and a guy came by and said, “They’ve killed four students in America…..I must have been 14 or 15.”

Immortalized in Neil Young’s seminal song, the incident in question concerns the US National Guard’s gunning down of a student demo on the campus grounds in Ohio. Four students were killed.

The increase in the militarization of society is, according to Dixon, a direct response to people’s resistance to wars:

“The national recognition of our armed forces report came out exactly as a result of opposition to wars and so they know that people are questioning it and that makes it doubly problematic that they’ve decided to condition children under the age of 14.”

“We’ve seen a kind of encroachment of the armed forces but also sort of military ethos. Those kinds of concepts [have been integrated]… into education….on a really big scale in lots of different ways…I think unless you’re in education – you’re a teacher or a parent or you know or it’s happening in your community – you’re not really aware of it because it’s very much…under the radar. But all kinds of things – armed forces visits to schools, curricular materials provided by the armed forces, military ethos, activities for kids who are at risk of failing – are alternative provisions kind of stuff.”

Sangster claims that the armed forces are sponsoring certain schools, thereby influencing curricula and determining education ethos. To this end, she says, there has been a big increase in cadet units and argues that the government is focused on getting them into state schools. Even more insidiously, the Forces Watch coordinator claims arms companies are present at schools. All this is being done surreptitiously.

The joint aim of Sangster and Dixon in countering the war propaganda, is to create a national dialogue about the military’s mission creeping into schools. “This is problematic and should be seen as problematic”, says Sangster. “It’s not normal that the military are given more access than any other sector to a young [captive audience]….within education.”

Mic Dixon is equally as forthright, arguing that the governments focus is to condition children to become soldiers and the society to be militaristic predicated on fear and regression. The context, as Dixon outlines, is one in which:

But, conversely, we also have a government:

“that can find a hundred million pounds to promote military ethos in schools; that can put in £25 million or £50 million to incorporating new cadet groups in state schools. This is where the focus is going”, says Dixon. who adds that “this takes away from combating the real threats to the world – global warming, malnutrition, the mass movement of people from the global south etc – which we are facing now. The easiest way to combat these threats “is to put those resources into educating people to [the said threats]…and not to a kind of war like system which this country has been running on for the last 200 years.”

How best to address the problems described given the nature of Britain’s economic war machine?

The notion that arms exports support the country “is a complete myth”, according to Dixon, who claims the arms industry is “subsidized by the government to keep the government in Britain in the position where it wants to be….The arms industry is subsidized to an enormous extent. Look at Trident for instance. We’re committing £160 billion to build a submarine. What is that if it isn’t a subsidy?”

The subsidies currently applicable to the arms industry, could according to Dixon, be used to subsidise other, more useful jobs like renewables and clean energy. “This isn’t a nebulous and utopian vision, it’s…a fact. The real struggle is to overcome the constant myths [peddled by governments]”, says Dixon.

For Emma Sangster and her organization, these myths are difficult to dispel:

“They’re… narratives that are utilized and there’s a lot of those around the armed forces militarism. I mean in some ways I think the ‘jobs argument’ is a very real one. If you’re in that community that is dependent on one big arms manufacturer for thousands of jobs, that’s a very real argument”, says Sangster. “I think it’s a matter of political will and it’s not an argument that should just finish the conversation. There needs to be a political will to diversify our industrial base in those areas, not be dependent upon arms manufacture and to bring some ethics into our manufacturing industry.”

Both Dixon and Sangster agree that irrespective of whether the governments strategy of military visits in schools is successful in terms of recruitment, the overall aim is to make war palatable and an inevitable part of life. It’s about giving a human face to the military.

According to Dixon, the strategy is a calculated [and successful] one whose purpose is to “gain support for a militaristic country and outlook on the economy – the whole social structure which is what this country reverts to whenever anything comes up to threaten its coherence socially – and we’re seeing that happening now.”

The ‘success’ of the strategy, for Dixon, can be measured in terms of the lack of support and dialogue for any alternatives, and hence, the extent to which our society has been conditioned to be defensive.

“I think we mustn’t lose sight as a society that military action is a political act. It’s not neutral politically and has terrible consequences for….people. We mustn’t sleepwalk into a society where everyone just thinks, ‘Great’….As Mic says in the film – it’s a battle for hearts and minds….There’s definitely been a militarization offensive and it’s up to us as civilians and people who are really concerned about this issue to push back and say, actually this isn’t…the vision for the future.”

What are the solutions?

For Dixon, the key to all these issues is education, awareness and understanding of where we, as a collective and as individuals, are in this world. The fight is not just the struggle against the economic force, but also the theatrical force personified in Remembrance Day which Dixon covers in his film:

“Veterans For Peace UK – which are a strong thread through the whole of the film – do march at the annual remembrance service at the Cenotaph they go… when everybody else has gone – when all the bands have gone, when everyone’s gone – Veterans for Peace have their march and their ceremony”, says Dixon.

As the filmmaker acknowledges, the VFPs march to the Cenotaph and their laying of an anti-war wreath, is an aspect to this story that has been largely ignored by the ‘mainstream’ media:

“There are people that have never seen the frontline who are traumatized by the fact that they’ve been loading bombs onto planes that go and attack innocent people in countries that they have no knowledge of”, says Dixon.