End the Fed. Are you nuts?

Central banks are not privately owned but the property of the government. Ending central banking would be giving the keys to the global economy to the financial institutions they are meant to be regulating.

We often see comments on this website from people who want to ‘end the Fed’ because they think it would address the rampant corruption and collusion of governments, central banks and the private sector.

In reality, ending the Fed – or any one of the central banks outside of the European Union – would simply give more power to the banks and wealthy elites whose relationships with governments and central banks are already inappropriate.

Abolishing central banks would simply formalise this arrangement, undermining democracy and removing the ability of governments to respond to changes in the domestic and global economy.

The claim that banks are privately owned is factually incorrect. With the exception of the EU which began life as an industrial cartel, created and controlled by Europe’s major heavy industries (coal, steel, car manufacturers and farmers), central banks are created by and belong to federal governments. Even the European Central Bank is owned by the central banks of EU member countries, which in turn are owned by their governments, even if most do not have the right to issue their own currencies.

The US Federal Reserve was created by Congress, and its chairman is appointed by the President; the Treasury receives nearly all its profits. The same applies to the Bank of England, the Reserve Bank of Australia, Bank of Canada etc which were created by their respective Parliaments.

What do advocates of ‘ending the Fed’ think will happen if the US got rid of central banking altogether? What currency would it use exactly?

The only possibility would be to replace the Fed with another, private ‘Fed’ in which case central banks would go from being co-opted by the private sector, to being formally controlled by it.

Ending the Fed would make central banks the property of the private sector, which, ironically, some people believe is already the case. So it’s a little bizarre that they think demolishing central banks would somehow address corruption and malfeasance.

One need only look at what happened to Greece to understand what happens when a government gives up its central bank, and the right to issue its own currency.

Ending central banking is the nail in the coffin of democracy. It is giving capitalism exactly what it wants: the complete takeover of the state by the market. 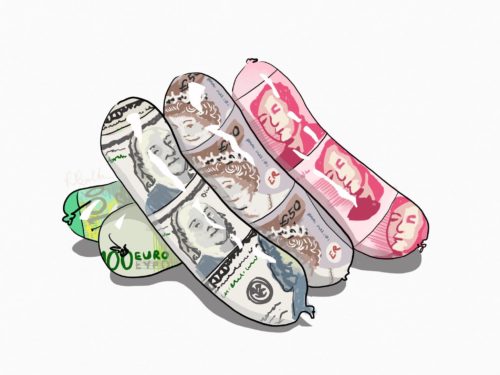 Central Banks: A Sausage Based Conundrum