We are living through one of the greatest monetary experiments in modern history where monetizing debt is enslaving millions.

But is there a silver lining to the cloud of massive monetary debasement? Economist and writer David Morgan, alongside Goldcore founder Mark O’Byrne, join host Ross Ashcroft to find out.

A key question that arises in this current era of Covid-19 and debt monetizing enslavement, is whether the banks’ strategy of quantitative easing  will do anything to rein-in the culture of monetary debasement? Any cursory study of monetary history would suggest not.

It’s clear that the consequence of pumping money into the system dilutes the money supply. Whenever the process has been accelerated in response to previous deterioration’s of currency, a crisis has normally ensued. Eventually, the acceleration goes exponential. So, as was the case with Zimbabwe, more and more does less and less.

“You see people holding up these signs saying, ‘starving billionaire’. So it’s not a function of how many zeros are in your bank account. It’s a function of what the value of the currency is”, says David Morgan.

These kinds of fiat currency experiments which have a 100 percent failure rate, is characteristic of what Morgan describes as ‘unsound money’. By contrast, real, ‘sound money’ is that which can be determined objectively through value derived from the intellectual and physical labour of human beings.

Morgan also acknowledges that real money is embodied in precious metals such as gold and silver. The key distinction to be made is that compared to precious metals, fiat currencies (ie the basis through which governments’ create debt-based economies), do not have intrinsic value independent of nominal value. Morgan thus argues that the safest way for individuals to protect their wealth “by far” is through gold (which is less volatile than silver). Morgan recommends that saving in a failing fiat is to be avoided.

The precious metals analyst grasped from a young age that banking was based on a promise to pay something that didn’t exist and that the gold standard, as opposed to fiat currency, is less likely to distort the economy.

In his book, The Silver Manifesto, the analyst contends that rather than the gold standard undermining progress by allegedly constraining currencies (a common criticism), it is, by contrast, concomitant to the notion of sustainable development and natural law.

“If we lived under a natural law we would basically have peace on earth and we would be in a more or less different paradigm than we find ourselves in today”, says Morgan.

Nevertheless, even under the existing fiat system the public can take practical steps to redress the monetary-societal imbalance. Living within their means and reducing their exposure to bad debt are two examples. The documentary film, The Four Horsemen offers people more ideas and forms of action they can undertake that will help them going forward in this regard.

Ultimately, says Morgan, it all goes back to natural law:

“Under a natural law, you would have a more diverse culture with a lot more opportunity for everybody. They’d be a lot more free thought and critical thinking. People would be more connected than they are now, by far”, he says.

The problem, however, is that natural law is antithetical to the current paradigm of money printing and asset purchasing. The public were told that quantitative easing was a temporary measure to buy some time to enable governments’ to structurally fix some of the problems in the economy. But it turns out quantitative easing is being used on an ongoing basis to support, not just the financial system and banks, but to prop up the entire economy.

The founder of GoldCore, Mark O’Byrne, argues that in the coming months and years this process will result in what he describes as “the greatest degree of currency debasement and monetary experiment in the history of mankind.”

“When you release so much money into the system, ultimately, they just go on a keyboard and create trillions and trillions of dollars, euros and pounds to support, not just the bond market, but also the stock market and the entire ecosystem that this gigantic Ponzi scheme bubble has created.”

The ramifications will be the emergence of significant rates of inflation as well as stagflation and stealthflation. In line with David Morgan’s thinking above, O’Byrne, contends that the precursor for wealth protection under such conditions will be the diversification of savings and investments with an emphasis on the outright ownership of precious metals.

What is the probability of Western governments’ confiscating publicly-owned gold and silver in order to shore up their finances?

According to O’Byrne, such a scenario is improbable. Depending how bad the crisis gets, the GoldCore founder thinks it’s more likely that governments’ will nationalize the resources of the world’s strategic gold and silver mines or be tempted to confiscate gold that’s held on the various exchanges.

The Russian, Chinese and German central banks, who have amassed huge dollar reserves and are buying gold in massive quantities, are aware of the risks – so much so, that the Bundesbank have taken back their gold from the Federal Reserve.

This is worrying the U.S treasury who claim that the dollar will be massively devalued and possibly re-bought with gold.

Such an eventuality will be of concern to Russia and China who not only have significant dollar holdings but also because euro and sterling debt pose their own set of debt-based risks. 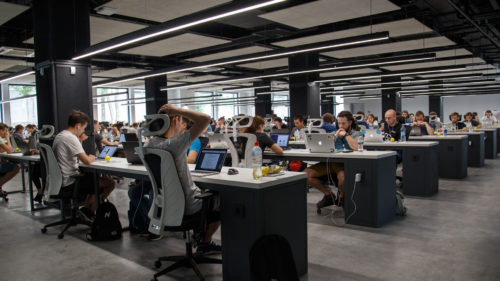 “This is a time when people need to think about their financial freedom by, in effect, becoming their own central bank. A central bank is not going to protect your wealth and savings. Quite the opposite. It’ll devalue your savings”, he says.

O’Byrne does not regard the printing of endless money as a solution to the crisis but, rather, argues that it will perpetuate existing problems: “In such a situation, the whole system will collapse, ultimately. And you’ll see massive inflation”, he says.