My journey back to Venezuela

Journalism professor, Dr Jairo Lugo-Ocando, returned to his Venezuelan homeland after many years to find chaos, violence, food shortages and a deeply divided public that can barely afford to support itself.

Maracaibo-Maicao. Wuilly Arteaga, 23, dreamed of playing one day with the Simon Bolivar Orchestra. Between jobs and his studies he practiced every night at his home making, as his neighbours recall, ‘life bearable for all of us’. In what seemed at the time for his friends and family an unusual step in his life, Wuilly became political some months ago and decided to play his instrument during the growing protests against the government. He became a symbol for the resistance. On July this year he was apprehended by the National Guard, tortured and beaten. His own violin was smashed against his head, leaving him deaf in one ear.  It could not be more telling of what is happening in my country. The National Guard and its paramilitary groups are responsible for the killing of over 120 young people last month alone.

As Karl Marx once wrote: it is a history that repeats itself, first as tragedy now as farce. I visited my family in the city of Maracaibo (some 500 kilometres from Caracas). The situation is worst than dreadful. My sister, a single mother and twice-awarded primary school teacher, struggles to make ends meet. Her salary is the equivalent of US$ 35 a month, this in a country in which a carton of 12 eggs costs US$ 2, going to a routine check with a doctor some to some US$ 15 dollars (the public heath system is bankrupt) and the rent for a one bedroom flat (in a decent place) over US$ 100 a month. The only thing my sister can afford is petrol, which is still very cheap. But for her it makes no difference, as she will never be able to afford a car.

I arrived through Panama as most airlines have now stopped flying to Venezuela, which only until a few years ago was one of the main hubs to connect Latin America with the world. The country is in crisis, the streets blocked and the people are at arms. Venezuela is profoundly divided between those in power and those who want the Chavistas out, the latter increasingly outnumber the former. Despite the recent sham poll this week, the numbers are at odds against the government. In the Parliamentarian elections of 2015, when the situation was not nearly as bad, the opposition won by a landslide. The government response was to ignore altogether the Parliament and use the Supreme Court. Even the National Prosecutor, Luisa Ortega Díaz, appointed by Hugo Chavez himself, has turned against the regime and denounced the fraud.

Here are the facts of the current crisis

1) The Chavista regime, ignoring the elected Parliament in 2015, illegally convenes a constituent assembly to dissolve the congress.

2) The same CNE refused to call the presidential referendum recall despite the fact that 20% of citizens signatures were collected on time, (to avoid doing so they changed the rules at the last minute to say that 20% had to be by federal state).

3) The Chavista regime has more than 440 political prisoners languishing in prisons.

4) The regime has brought down the country’s economy, which today shows more poverty and hunger than in 1998 when Chavez came to power.

5) 90% of the companies expropriated by the Chavista regime are broken (which explains the current lack of food supply and electricity cuts.

6) The National Electoral Commission – controlled by the Chavista regime – convened a poll to establish a national assembly in weeks while it refused to call elections for governors and mayors when it corresponds to 2016, arguing that it did not have the resources or time to do so.

Truth be told, the current President, Nicolas Maduro, inherited the institutional and financial mess from his predecessor but he lacks the charisma and connections to keep things going. His own ideological stubbornness and a complex web of power, which includes the military and drug cartels, makes his own administration something of a roller coaster.

The situation has become so unmanageable that I saw riots, violence and anarchy everywhere. I had to walk several miles to get home after visiting some relatives as there was no public transport and most roads became blocked by protesters.

In my way, I went through teargas, rocky blockades and an ice cream vendor who sold me a lime ice lollipop. Yes, it is beyond bizarre, it is magic realism at its best.

To get out of the country, I had to pass by the Colombian-Venezuelan Northern land boarder. Nelson, my driver, use to work with PDVSA (Petróleos de Venezuela, S.A), the national oil company, once the third largest petroleum conglomerated in the world, but today almost bankrupt and having to import refined gasoline from Chavez’s arch enemy, the USA. Nelson, who was fired along with other 22,000 others by Chavez himself, knows the way, he literally smuggles me out by bribing military personell at the checkpoints with deodorant, toothpaste and soap bars.

After reaching Colombia, I had to walk back across the border to stamp my passport on the Venezuelan side, pretending that I never crossed in the first place by the backdoor. The queue is long and people are out in the sun waiting to be stamped. Most are refugees; carrying their life’s belongings in a few bags. A woman in a red shirt (all public employees are made to wear red) takes my passport and goes to the back. Nelson has obviously given her something. She brings it back and returns with the stamp. I walk back to the Colombian side. There is air conditioning and the immigration office looks more like a bank branch. It even has coffee for those waiting. I sit down and cry my eyes out, I tell Nelson to give me a few minutes.

I now feel safe, having left my own birthplace. It shouldn’t be this way, but that is how I feel. 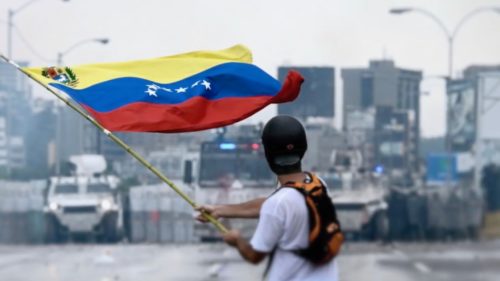 Venezuela – The Anatomy Of A Coup