Saving Syria’s Children: How the BBC are embedding their journalists with Jihadist groups in Syria

For many years I have been following Robert Stuart’s exhaustive and detailed exposition of the BBC Panorama documentary Saving Syria’s Children that highlighted the aftermath of an alleged incendiary bomb attack on the playground of the Urm al-Kubra school near Aleppo in Syria.

The BBC team comprising reporter, Ian Pannell and cameraman, Darren Conway (who coincidentally were inside Syria when the alleged attack happened), reported on, and filmed, the incoming casualties arriving at the Atareb hospital on 26 August 2013. The footage formed the basis of the documentary.

Stuart contends that the filmed sequences were largely, if not entirely, staged. Scenes from the documentary were shown as part of a brief BBC News at Ten broadcast report by Pannell and Conway which contained harrowing scenes of teenage boys and young men, their skin apparently in tatters, racing into what the report describes as “a basic hospital funded by handouts” to be treated for burns.

In one particularly disturbing scene a tableau of young men writhe, drool and groan, seemingly in great distress.

What is particularly striking about the scene, are the actions of the central figure, Mohammed Asi, who looks directly into the camera for several moments before raising his arm, at which point the group around him instantly became animated before moaning in unison.

All of the anomalies and contradictions highlighted call into question the authenticity of the entire alleged attack. 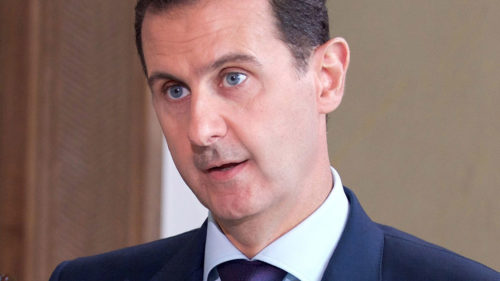 Did Syria’s President Assad attack his own people with chemical weapons?

All of this information was hidden from the public by the BBC.

More recently, Stuart has alleged, convincingly, that BBC licence fee money was used to ensure the safe passage of Pannell and Conway and that the film-makers were given protection by the ISIS-affiliated Salafist terror group, Ahrar al-Sham.

“The award-winning team of reporter Ian Pannell and cameraman Darren Conway OBE were embedded with jihadi group Ahrar al-Sham which, according to Human Rights Watch, had three weeks earlier worked alongside Islamic State (IS) and al-Qaeda affiliate Jabhat al-Nusra as one of the key fundraisers, organizers, planners, and executors of an attack in which at least 190 civilians were killed and over 200 were kidnapped.”

Furthermore, in the midst of the crisis, Stuart produced evidence that “Conway filmed, at close quarters, an ambulance plainly bearing the ISIS logo, along with its militarily attired and armed occupants.”

This prompted Stuart to report  Pannell and Conway’s flagrant abuse of their positions as professional BBC journalists to the National Counter Terrorism Security Office on the grounds that:

“the named individuals apparently established a business relationship with members of a jihadi group with links to al-Qaeda and ISIS in Syria in August 2013.”

In a January 2018 blog piece, Stuart mooted the possibility of a connection between the alleged incendiary attack and the then incipient White Helmets. The researcher confirmed the veracity of this assertion in a follow-up article where he demonstrated that senior White Helmets members were present at Atareb Hospital on this date.

Stuart outlined the above issues to his constituency MP, Shadow Defense Secretary, Emily Thornberry, and opposition leader, Jeremy Corbyn but neither addressed any of his legitimate concerns.

The researcher has also presented his findings in open public forums on numerous occasions and the BBC have been informed of an award-winning U.S online magazine’s description of Saving Syria’s Children as “a sham.”

Despite this, neither Stuart nor the said U.S online magazine, have been threatened by the BBC with any injunctions which would almost certainly have been the case had the allegations or claims been false.

The controversy that surrounds Saving Syria’s Children and the BBCs connections to Islamist terrorist groups, including the White Helmets, adds fuel to the fire of those independent researchers and journalists who posit that mainstream coverage of the current turmoil in Syria is emblematic of the corporate media’s systematic war propaganda against the Syrian government of Bashar-al-Assad.

It is clear that the BBC not only colluded in the production of false UK government propaganda intended to influence a vote in parliament to commit British troops to Syria in yet another illegal war, but that they did so by engaging in a sophisticated and well-planned series of events. This involved the active participation, not only of Islamist terrorists and their sympathizers, but the embedding of its journalists.

As the decline in traditional forms of media begins to take hold, the notion of the documentary as a sophisticated form of war propaganda, is increasingly being sold as a the new form of communication to the public. Indeed, Saving Syria’s Children must be seen in the context of the 2018 Oscar-nominated, emotionally charged propaganda documentary Last Men in Aleppo.

The willingness of the BBC to overtly fund and directly produce war propaganda would appear to be a first for the corporation. Their actions are not only inexcusable, but have the potential to pose a serious risk to national security and to further undermine what little remains of the trust the public has in the corporation’s ability to report accurately and objectively on issues of national importance.