After so many military blunders, NATO and neocon credibility is in tatters. Yet their unhinged rhetoric continues and is supported by a doting corporate media. Vladimir Putin recently commented that the citizens of decimated Iraq, Libya, Afghanistan and Yugoslavia have seen how peaceful NATO is.

Host, Ross Ashcroft, met up with Analyst and former marine corps Intelligence officer, Scott Ritter, and Independent foreign policy analyst, Michael Averko, to discuss whether it’s time for us to question the narrative fed to us by so-called Western humanitarians?

Scott Ritter is rarely, if ever, wrong when it comes to his analysis of geopolitical events. Relatively recently, for example, he was right about the reasons behind the militarization of the US police and the debacle that surrounded the US withdrawal in Afghanistan. He now appears to be right in relation to the war rhetoric against Russia.

In aligning with Alex Krainer’s analysis on the current Russia-Ukraine impasse, Ritter views the crisis as part of an historical trajectory of propaganda in which Western leaders seek external wars to distract from their domestic problems. The democratically-elected president of Croatia agrees with Ritter. He recently implied that Washington’s war rhetoric was in reality about American domestic politics and Biden’s low poll numbers.

Washington has been facilitated in this latest aim by a compliant media who, without exception, have repeated the baseless claim from the Biden administration that Russia is about to invade Ukraine. The political and media establishment seem intent on provoking Russia into an incursion as a pretext for a NATO-US led war.

Ritter says that Ukraine provides the ideal external distraction because it gives the media an opportunity to not only create the narrative of the heroic Ukrainian resistance against the evil Russian bear, but to also personalize it by depicting the Russian president himself as irrational, impulsive and the personification of evil.

The propaganda war is not just a political question but a military one. Contrary to widespread public perception, Ritter says the American military has gone from what he describes as the finest military force the world has ever seen in the mid to late 1980s, to one that is currently unfit to take on the Russian’s and defend Ukraine even if it wanted to.

According to Ritter, it’s not just the US that isn’t in a position to fight, NATO isn’t either:

By contrast, says the analyst, Russia have reconstituted previously disbanded forces from the Cold War period which have been trained, equipped and organised to a standard sufficient to destroy NATO. Former prominent US General, H.R. McMaster, who gained fame in Afghanistan and Iraq, has admitted this.

In 2016, it was reported that McMaster concluded in a study that Russia has overwhelming artillery, electronic and armoured supremacy and that it would be the latter who would most likely surrender in any future conflict. Ritter says that the US generals know they are not in a position to fight a war with Russia but that many US politicians refuse to admit it.

It’s precisely the financial interests connected to the military-industrial complex that, from a US perspective, is a key component of the war drive. But as Ritter says, in reality, it’s Ukraine and Russia, not the US, who are in the driving seat. The former envisage being a future NATO member even though there’s no credence for such a move.

Ritter is clear that if NATO allow Ukraine to join it would be tantamount to suicide.

“Former Ambassador, William Burns, wrote a cable where he said: ‘This is what the Russian position is and we need to respect it’. Russia followed through with a foreign policy statement that said the exact same thing. In this, Ukraine is a red line. Russia’s military strength is such that they are forcing the United States and NATO to listen. And guess what? It’s working. Russia is in control.”

Foreign policy analyst, Michael Averko, outlines the regional history that gives rise to the Wests poking of the Russian bear:

“There’s an area in the west of Ukraine, notably in Galicia-Volhynia, Transcarphia, that was ruled by the Austrian Habsburgs and before that, Poland. When these people became part of the Soviet Union, they realized there was a great cultural divide. When the Soviet Union broke up, Western NGOs were very much influenced by this west Ukrainian component.” 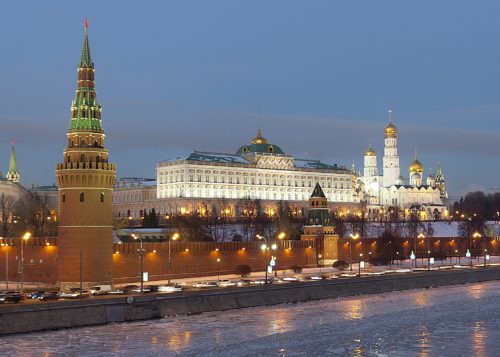 “During the 1990s this anti-Russian variant began to gain the upper hand in Kiev, the capital. And what you have, basically, is a sort of culture clash. West Ukrainians with an anti-Russian bent complained about Yanukovych’s culture minister being biased against them. But in the meantime, the person they had under Yushchenko was biased against a pro-Russian perspective. And now we have a clear anti-Russian bias as well, and this rubs the pro-Russian areas the wrong way.”

Averko argues that it is only through diplomacy that the current impasse can be broken.

One of the key stumbling blocks towards a lasting peace, is the anti-Russian component within the Kiev regime who reject outright any ideas around federalism or regional autonomy in Eastern Ukraine and instead insist on a highly centralized Ukrainian nationalist state.

This level of intransigence is antithetical to the principles embodied in the Minsk Agreement. Negotiated by the Organisation for Security and Cooperation in Europe, of which the US, UK, Russia and Ukraine are members, and endorsed by the UN Security Council, the Minsk Agreement, is centred on the following: Ukraine gaining control of its borders, devolution and a high degree of autonomy for the Russian speaking areas in the East, disarmament, the withdrawal of all foreign forces and mercenaries from Ukraine and an amnesty for prisoners.

But the problem is, the Biden administration has not applied any pressure on the Kiev regime to honour the Minsk Agreement, even though it is obliged in law to support it. In effect, Washington has abandoned the Agreement in favour of the highly intransigent position of the government of Ukraine and is therefore hindering the chances for any diplomatic solution to the crisis.

Meanwhile, Beijing is putting pressure on the US to insist that Kiev does not renege on its Minsk Agreement obligations, and Russia is engaging in talks with France and Germany. Averko says that the notion the world supports the US position on Ukraine is an illusion and says that solutions to the impasse are more likely to emerge as a result of the greater involvement of others either inside or outside of NATO.

Ultimately, the biggest impediment to the breaking of the impasse is arguably the endless stream of anti-Russia and Putin propaganda emanating from Washington and London that depicts the country as an existential threat to Western civilization.

This threat is perpetuated and reinforced in order to augment the political ambitions of US politicians. New Jersey Senator, Bob Menendez, for instance, relies heavily on the anti-Russian, Ukrainian expat community for support. The anti-Russian views of Menendez and his supporters are given disproportionate air time by a mainstream media that seems to have learned nothing from the Iraq war debacle.

Although the rise of social media is resulting in more spaces for alternative narratives, it nevertheless remains the case that those in the mainstream who openly question the prevailing anti-Russia orthodoxy are treated like pariahs in much the same way as those who questioned the Iraq narrative were two decades ago.