It is incredibly rare for the BBC to admit that one of their Syrian reports failed to meet the corporation’s editorial standards for accuracy by reporting false claims.

The corporation, whose misreporting has dogged both journalism and peace in the Middle East for decades, finally conceded that their reporting of an alleged chemical weapons attack by President Assad’s government in the Syrian city of Douma on April 7, 2018 was seriously flawed.

Host, Ross Ashcroft met up with Political Scientist, Piers Robinson, and Journalist, Vanessa Beeley, to discuss the background to the BBC Radio 4 programme at the centre of the story, Mayday: The Canister on the Bed.

The Radio 4 programme, Mayday: The Canister on the Bed, broadcast on 20 November 2020, included an account of the role played by a former inspector with the Organisation for the Prohibition of Chemical Weapons (OPCW), known by the pseudonym Alex, who believed the chemical weapons attack at Douma, Syria, had been staged and had expressed concerns about the OPCW’s conclusions on the matter. The programme insinuated that the disclosures by Alex had been motivated by a reward of $100,000 offered by WikiLeaks.

The September 2, 2021 outcome of the BBCs Executive Complaints Unit (ECU) published on the BBCs website “found that, although they were limited to one aspect of an investigation into a complex and hotly contested subject, these points represented a failure to meet the standard of accuracy appropriate to a programme of this kind.”

Renegade Inc. had discussed with Piers Robinson the backdrop to the Douma incident on 4 June 2018, a full three years and three months prior to the acknowledgement by the BBC that their programme contained serious flaws. However, on 14 April, 2018, The Times had dubbed Robinson one of Assad’s useful idiots for simply questioning the official narrative.

This is an excerpt from The Times’ leader that hit people’s doormats that Saturday:

“Given all that’s known about President Assad’s willingness and capacity to inflict harm on a captive population, it would take an extraordinary degree of credulity, sophistry and ignorance to exculpate him of this atrocity. Exactly those characteristics are exemplified by a small group of academics, whom, we report today at respectable institutions that include universities of Sheffield and Edinburgh.”

The Times, in other words, had smeared Robinson and the Working Group on Syria, Propaganda and Media even though over three years later the BBC effectively acknowledged that this group of academics had been right to question the official mainstream media narrative of the Douma incident.

“These are ways of trying to humiliate and discipline people in public so they don’t ask questions”, says Robinson.

The BBCs apology, the testimony of OPCW investigator, Ian Henderson, together with the leaking of an internal engineering report and the fact that there was no evidence of any nerve agents detected at the site, clearly indicate that the claim the Syrian government carried out an attack is unsustainable.

One of the problems from the outset is that journalists and others have been reluctant to engage in the issue because they’re scared of being labelled with the epithet, ‘conspiracy theorist’ or smeared as Assad or Putin apologists. An example of these kinds of smears occurred following the signing of a Statement of Concern published in March, 2021 by among many others, the first OPCW director-general, Jose Bustani and Britain’s Lord Admiral West.

Robinson outlines the stakes involved in the alleged 2018 chemical weapons attack which he suggests bear all the hallmarks of a casus belli:

“The French, British and Americans bombed Syria seven days after the alleged attack in Douma in retaliation for it. And when the OPCW went in, they were obviously under tremendous pressure to reach a conclusion which would underpin the French, American and British decision to bomb a sovereign country”, says Robinson.

The academic argues that the authorities want to ensure that the regime change strategy in Syria continues by not conceding any ground. “Even though the facts are out there”, says Robinson, “I suspect they will stay contained until there’s some broader shift in the geopolitical agenda in relation to Syria.”

For the past 20 years since 9-11, the mainstream corporate media and other political institutions of the state have helped foment regime change agendas and the death and destruction caused by them.

“What we see are very powerful indicators that our democracies, parliaments and mainstream media aren’t working. We wouldn’t be where we are today in Syria if we had a functioning media, academia and parliament. The tough questions would have been asked. The truth would have been gotten out. At this moment in time, we’re living in a world where deception in foreign policy, and more widely, is deep rooted and a powerful tool of political control”, says Robinson.

The academic argues that “what is required is a root and branch rebuilding of our democracies so that we can then have greater resilience against wars built on lies and all the destruction that flows from that.”

As an investigative journalist whose work for many years has largely focused on events in Syria, Vanessa Beeley also knows what it’s like to be maligned by a mainstream media culture that’s built on deception and lies. Based in Damascus, Beeley was also targeted by the BBC Radio 4 programme for committing the ‘crime’ of truth-telling.

The journalist makes the point that herself, Piers Robinson, members of the Syria Working Group and mainstream journalist, Peter Hitchens doggedly pursued complaints against the BBC and it’s flawed programme which prompted the apology from the organisation’s ECU.

Beeley also notes that the mitigating caveat posited by the inspector, Alex, in the Mayday programme, namely that he had not said the entire chemical event was staged, is in truth, a semantic point. We know, for example, that BBC producer, Riam Dalati, claims that the hospital scenes were staged. If this is so, “then that raises the question, says Beeley, “as to whether the following scenes were also staged and one can easily come to the conclusion that they were.”

The journalist working on the programme, Chloe Hadjimatheou, was in communication with Beeley prior to its broadcast. Up to that point, Hadjimatheou sent out her final questions that were clearly intended to frame Beeley as a conspiracy theorist. After the programme went to air, and based on the fact that Beeley challenged many of its conclusions, the two journalists continued what became increasingly heated exchanges.

A major issue Beeley raised was to question the credibility of Abdul Kader Habak, one of the primary researchers the BBC used for the programme. Citing conflict of interest issues, Beeley asserts that Habak had been trained by Basma Journalism, an outreach agency of the British Foreign Office and Ark who, along with former British military intelligence officer, James Le Mesurier, were responsible for the formation in 2014 of the Islamist-terrorist front organisation, The White Helmets. In addition, says Beeley, Habak had been caught filming with Nour al-Din al–Zinki, a terrorist group that had beheaded a 12 year old child in August, 2016.

Beeley says that Hadjimatheou requested that the BBC defend Habak against these charges despite the fact that Beeley had in her possession damning evidence against him.

This evidence pointed to the fact that 1) Habak worked with brutal extremist terrorist groups inside Syria, and 2) that he was trained effectively by the British Foreign Office.

Beeley says that this conflict of interest hadn’t been made clear during the making of the Mayday programme, and still hasn’t been clarified by the BBC to this day.

What the programme highlighted is the way in which the BBC, and corporate mainstream media more broadly, have painted themselves into a corner to the extent that the state propaganda narrative can no longer creditably be defended.

Nevertheless, given that the BBC is, in Beeley’s view, “an extension of British intelligence agencies and of the British government”, it will, to a large degree, continue to double down on its propaganda reporting on events in Syria in the same way that it has over Iraq.

A recent example of this was when another producer of the Mayday programme, Tom Wright, put out a tweet defending the judgement by the ECU and saying that it still didn’t show that the chemical weapons attack didn’t happen. 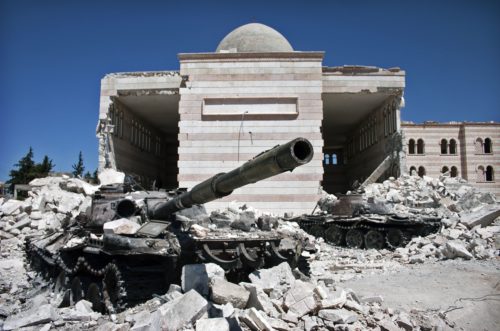 In Beeley’s opinion, certain BBC journalists and producers act in this way because the organisation is “being instructed” to double down in order to shield the British state:

“Let’s not forget the British government committed a war crime in Syria if it had proven that the Douma alleged chemical attack didn’t happen, and it largely is proven by the dissenting inspectors. So effectively, now, the BBC is protecting the British state against prosecution, potentially, for unlawful supreme aggression against the Syrian state”, says Beeley.

“The BBC doesn’t speak truth to power, it protects power from truth and is not fit for purpose. It’s not a media operation. It’s an extension of power. And it is there to silence dissent and investigative journalism.”

Beeley says that the public should ensure the BBC is made irrelevant and that they should focus intuitively on independent analysts, researchers and journalists that respond to the notion that something isn’t right with the mainstream narrative version of events.

This has been the direction of travel Beeley has reliably followed over many years having withstood a multitude of ad hominem attacks on the way. In so doing, the journalist’s critics have played the woman, not the ball. It hasn’t worked. Vanessa Beeley still stands tall.