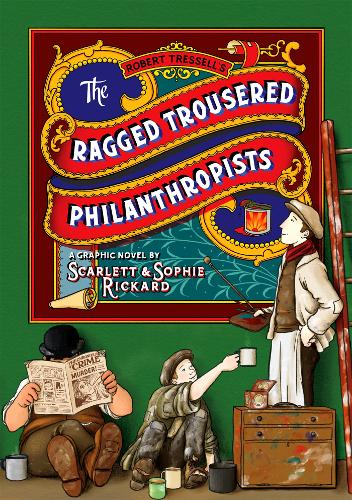 George Orwell said it was a book everyone should read. Published in 1914, The Ragged-Trousered Philanthropists, by Robert Tressell, detailed crushing poverty, squalor, and inequality in the UK.

Cut to 2020, and Sophie and Scarlett Rickard have republished the book as a graphic novel, because, sadly, it’s as relevant today as it was back then.

The author and illustrator sisters join host Ross Ashcroft to explore why this classic book remains so relevant.

Described by Alan Sillitoe as “The first great English novel about the class war”, and by George Orwell as “a wonderful book”, Robert Tressell’s The Ragged Trousered Philanthropists, chronicles the tale of sentimental archetypal socialist visionary, traveller, painter and decorator, Frank Owen. After settling down in the quiet town of Mugsborough, Owen befriends two fellow workmen who are painting the home of an exploitative wealthy neighbourhood resident. Owen soon discovers that one of his friends had his pay severely cut which left him undernourished and with barely enough money to feed his family, whilst the other is forced to move into a rat and flea infested slum.

The story is driven by a political narrative centred on Owen’s attempts to mobilize his colleagues into becoming organized in the hope they will undertake bold and fearless action in defense of their basic humanity. Few who read Tressell’s classic at the time of its release, could have possibly imagined that the issues raised in the book would continue to resonate over a century later.

The backdrop to author Sophie and artist Scarlett Rickard’s re-released best selling graphic version of the novel, was last winters socialist revival in the UK. Despite an impending Brexit and the resurgence of right wing politics in the aftermath of the Labour party’s crushing General Election defeat, the Rickard’s are convinced that the decision to release the book at this point in time, is the right one:

“We several times thought we’d missed the boat, politically, with Labour losing the election. But actually, I think it’s so relevant and far more important in this political landscape. With Covid highlighting inequality and everything being very polarized, it really is the moment for this book”, says Scarlett.

The themes in the novel are timeless, partly because the story dispenses with the myth that poverty is self-inflicted. Instead, the underlying narrative of the book focuses on the idea that impoverishment is a systemic problem rooted in capitalism.

“I think there is shame in being poor because of the capitalist ideology that suggests you’re just not trying hard enough if you’re not making enough money. Whereas this book points out that the reason you are kept poor is that it suits the capitalist class. The whole system depends on you being kept poor. The feeling of shame is definitely illustrated in the book.”

Norman Tebbit’s famous ‘on your bike’ speech, the pawning by the poor of their possessions and the high proportion of wages that goes towards paying private rents, illustrate how very little has fundamentally changed in over a century since Tressell’s time.

A powerful example in the book that’s apt for today is when Owen uses the allegory of an air baron to describe a future in which every resource, including those essential for human survival, have become monopolized by the capitalist ruling class:

“Poverty is not caused by marriage or machinery or overproduction. It’s not caused by drink or laziness or overpopulation. It’s caused by the private monopoly, the present system. They’ve monopolized everything possible. They’ve got the whole earth, the minerals in it, and the streams that water it. The only reason they’ve not monopolized the daylight and air is that it isn’t yet possible. And if it was possible, you’d see people dying for want of air as thousands now are dying for want of the other necessities of life.” 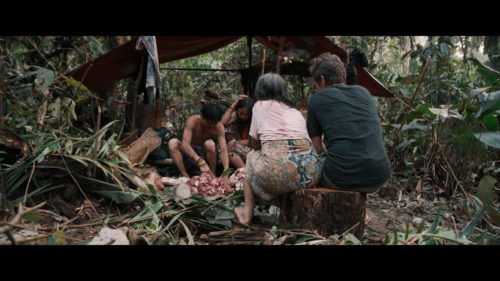 Sophie suggests that society isn’t any closer to addressing vast inequalities and ending the system of private rent today than it was a century ago. However, the writing and artistic collaborative skills of the two siblings will almost certainly contribute towards small behaviour changes in the months and years to come. In order to help achieve this, Scarlett utilized elements of the Bayeux Tapestry from which the illustrator was able to highlight, to great effect, the novels economic themes of inherited wealth and landlordism.

An additional striking aspect of the illustrated book is the way in which Scarlett emphasizes the contrasting lifestyles of the rich and poor. The artist depicts the proletariat in an abstract way in the form of stickmen as they are forced from one place to another.

Sophie describes how the creative process works between the two siblings:

“I make a script which is not unlike a film or TV script. I don’t tell Scarlett exactly what to do or in what panel. That’s her job. I tell the story and create the dialogue and the pace, the tension and the words. And then I would hand over the script to Scarlett and she would make a rough storyboard.”

The siblings appear to have an instinctive mutual understanding, and respect for, each others decision-making capabilities.

“Where Sophie works out the pace and the styling with the words, I work out the pacing, visually. Sophie and I collaborate every day. I’ll send a page and then we have a look. And she said the other day that the character that I’d drawn wasn’t quite how she thought of her. And she said, you know, this woman is going to be starving later and I hadn’t made her fat enough to be able to take some weight off. So there’s things like that where we work very much together.”

Sophie acknowledges that the appeal of Tressell’s novel in its political graphic form, is far reaching. Among the overlooked aspects, is the positive way it has impacted on the lives of people with learning difficulties and how potentially life changing ideas are made accessible to people who might not ordinarily consider themselves to be politically active. Although the innovative reframing of old, but timeless, ideas can be beneficial to people in different ways, ultimately it’s the compelling characters and ideas themselves, as part of a broader political narrative, which is key to explaining how the themes in the book have managed to resonate through time.

The aspect in the novel that most resonates with the Rickard’s relates to the story of Ruth Easton and how Ruth and her husband, William, manage to navigate the vagaries of their desperate, poverty-stricken situation. These are characters who do not make life-style choices but, rather, their decisions are determined by necessity as a means to survive. Today’s equivalent would be the poor pawning goods at Cash Converters or selling drugs on the streets. The Rickard’s illustrated and re-written version of The Ragged Trousered Philanthropists is an invaluable and timely reminder that the issues faced by the impoverished in Tressell’s time have not gone away.