The State Of British Banking

Further reading: Shredded: Inside RBS, The Bank That Broke Britain 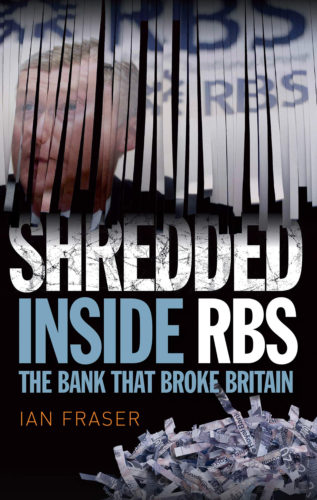 Since one of the greatest financial crises in human history, you can count on one hand how many British bankers have gone to prison for fraud. Understandably, UK taxpayers are asking why, especially after the government effectively nationalized bad banking debt – think RBS? At the hands of corrupt bankers, many hardworking people have lost their businesses, their homes and their savings.

An industry that has decimated lives still has no recourse to stop the banks illegal asset stripping. So we have to ask, why? Have the judiciary just got all the judgments in favour of the banks plain wrong? Are that world class British police, inept or underfunded? Have successive governments not had the insight or have they turned a blind eye? Or could it be that maintaining a corrupt British banking sector is a central plank of the British establishment strategy to maintain power?

Financial journalist and author of Shredded, Ian Fraser, and the Police and Crime Commissioner for Thames Valley, Anthony Stansfeld, met up with host, Ross Ashcroft, to discuss the factors that underline a British banking crisis mired in systematic corruption and malfeasance.

Root of the crisis

Ian Fraser argues that the main catalyst for the ongoing crisis in British banking is the economic ideology associated with Reagan and Thatcher in the 1980s and the philosophy of Milton Friedman that gave birth to it. Central to Friedman’s ethos, posits Fraser, is the notion that the sole purpose of a corporation is to enrich its own shareholders at the expense of other stakeholders as well as customers, the environment and society in general.

The prerequisite condition for this enrichment is the deregulation and liberalization of the financial system. It was as a result of this restructuring process that banks were reconfigured as ancillary financial service and insurance conglomerates. By the late 1990s, both clearing and high street banks began to own trading operations. Profits in the likes of RBS continued to be churned out largely on the back of a credit-fueled economy overseen by politicians like Tony Blair and Gordon Brown who were reluctant to intervene in the goose of a banking system that laid them their golden egg.

By the time of the NatWest take-over in 2000, says Fraser, the board of RBS, believed they could walk on water. However, a series of overpaid acquisitions up to ’07 resulted in the banks destruction and subsequent bailout a year later. Then came the crash of ’08. It was around this time that Gordon Brown, during a string of Mansion House speeches was, in the words of Fraser, “waxing lyrical about the bankers as almost sort of quasi divine beings who were leading us on to a new golden age with their amazing skills of lending money and all the other stuff that they were doing.” 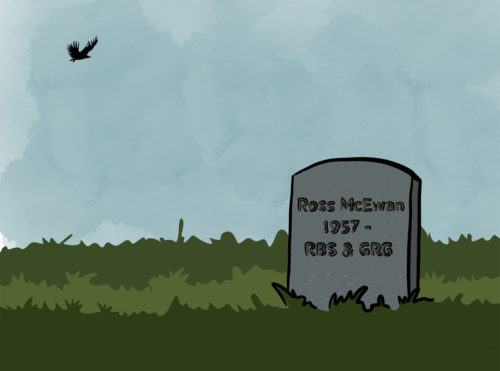 The ability of bankers to bamboozle politicians and public alike with obfuscating and disseminating language has, in reality, become a euphemism for high-end, white collar crime which the crash symbolized. Citing National Crime Agency figures, Anthony Stenfeld says “we’re losing about 190 billion a year through fraud. It’s on a massive scale. But we spend probably 0.03 of a percent doing anything about it.” Ultimately, fraud cases are shunted around between the various agencies tasked with dealing them. “Nobody follows a case through and nobody is held responsible”, says Stenfeld.

A revolving door system has emerged within the banks and accountancy companies. Investigators have been known to walk into senior roles within departments of fraudulent banks that oversea crime. Nicholas Wilson has uncovered such activity in relation, for example, to HSBC.

“The classic one”, says Stenfeld, “is the senior partner of KPMG. When they audited HBOS accounts and managed to overlook a fraud of the best part of a billion pounds and a hole in the accounts that was approaching 40 billion, his next job was chairman of the Financial Conduct Authority.”

The chairman of Lloyd’s who took over HBOS when this was going on, went on to be chairman of the Financial Reporting Council which, keeps an eye on auditors. In other words, two people who presided over two of the most negligent or fraudulent institutions were appointed by the government to run the main body for policing, corporate governance and accounting standards, and in the other case, to run the authority which is supposed to police misconduct in the financial sector. “The establishment is not very keen to investigate itself. There is this sort of revolving of people within the system that will not hold itself to account”, says Stenfeld.

Furthermore, as an ongoing dispute between Trevor Mealham and Lloyds illustrates, it’s not just British banks who are losing billions, UK citizens are financially compromised, too. Whether it’s fraud, PPI mis-selling or document forgery and asset stripping, the cumulative effect of all these practices cost millions annually and result in a corrosive loss of trust with customers.

Some of these frauds are, as Ian Fraser states, built into the business models of financial institutions. The Turnbull Report is a case in point. Lloyds Bank commissioned the report but denied they had done so after they were challenged on its damning contents that exposed knowingly fraudulent accounting and financial fraud while also laying out the people and companies involved.

“That report was sent to the Bank of England in 2014 and it was sent to the Financial Conduct Authority at the same time. And they’ve sat on it. Nothing was done about it. They’ve still sat on it. They admitted very reluctantly that they did commission the report. But the fact that the report is substantiated, they absolutely deny”, says Stenfeld.

The current corrupt, fraudulent system built on sand is not sustainable. The real economy and its victims are increasingly being hollowed out where a finance sector appears to be eating everything in its path. “It’s critical that we have an honest banking system. At the moment, I don’t believe that is the case. What some of our banks have been up to at a board level is certainly serious, it’s certainly organised and it’s certainly criminal. So why don’t we treat it as a serious organised crime?”, says Stenfeld.