The UK: cost of everything but value of nothing…

Apparently, some analysts have worked out that “beast from the east” and Storm Emma is the most costly weather event since 19th December 2010. They have no clue who to invoice but the amount payable is in the region of a billion quid a day. If it was an act of God then the big man is on the hook for having his nature thwart our malls, roads, restaurants, sporting events, offices, supply chains – actually the list is endless. The reign of economic terror enacted by the snow on the UK is an act of war and God – or the Russians – are probably to blame.

But the weather – and the subsequent (almost certainly inaccurate) economic analysis – did something way more nefarious than £1bn worth of daily damage.  By putting a price on the effects of the snow it actually gave an insight into what we really value. And shock of shocks what we really value is not what The City or the stock market or the corporate class or surplus obsessed governments really value.

The snow closed workplaces and forced us to hang out and reflect without a stated aim. The snow limited our chances to use consumerist escapism in the malls so we had to think and imagine. The snow buggered some supply chains so we had to think differently about what ate and how we shopped which was enriching. The snow gave us an involuntary temporary insight into not going through the habitual commercial and corporate supporting rituals that have become second nature – and it was all actually a blessed relief.

So the cost might have been an estimated £1bn a day but the value was that great swaths of the British people were reminded that there is a far better – richer – life to be had beyond work, house prices and shopping. It also reminded us that if everything is reduced to a line item on an imaginary balance sheet then we become nothing more than a bunch of sterile actors performing mindless financial transactions.

How do you price a few teenagers pushing the car of an elderly woman so she gets home? How much would you pay to have a chat with someone you’ve never met before and work out you have way more in common than you originally thought? How much to feel the sense of purpose and community when heading toward a useful, shared goal. Let’s venture an estimate: priceless. 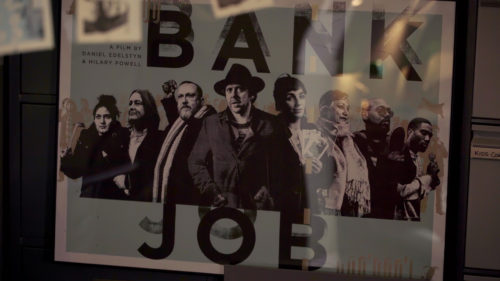 HSCB – A Rebel Bank with a Cause

We all felt that sense of belonging when we were clearing paths, helping the older ones, fixing a sledge for a younger one, ride sharing for efficiency and generally contributing to something greater. In short, the snow gave us the opportunity to step back, work out what we really value, enact random acts of kindness, throw a snowball and see the absurdity of the mainstream media for their frenzied coverage of something that was entirely natural. It was a welcome shift in perspective.

Keep serving debt not each other

None of the things we really love are particularly profitable. But if it’s not making money in neoliberal Britain then it can’t be much good. Small acts of kindness don’t push house prices to unsustainable levels so why enact them? Helping a stranger isn’t a Tory budget line item in the mindless and wrongheaded search for an economic surplus.  Realising that if everything does grind to halt for a few days the whole system doesn’t fall apart – it will just morph into something else – is a really dangerous, unwelcome thought.

Living in the post-Thatcher, post-crash UK malaise is – as most would attest – unedifying. Storm Emma and the snow showed us we know the cost of everything yet so rarely do we stop to understand the value. The corporates and the city love this because their modus operandi is value extraction – value extraction in debt-drenched zombie economy.

Like the Great Storm of 1987 this weather event will usher in economic consequences. But more importantly, it will have some of us reconsider what is important. It has given a glimpse of the difference between money and wealth between cost and value. It has shown how – as a nation – we treat the elderly and the homeless and more revealing it has shown where our priorities lie. Change those priorities and you begin to change how this busted system operates. Continue and we all keep paying the price of living in this neoliberal hinterland yet – ironically – so few can any longer afford it and, worse, even fewer want it.