If you listen to Western leaders or the corporate media, you’d believe that Russia is by far the most evil and regressive country on the planet and therefore needs to be sanctioned back to the Stone Age as its punishment. But how much of this rhetoric is based on fact, rather than the fear of the Russian bear coming out of hibernation into our interdependent multipolar world?

Whenever we hear about people talking about the East – Russia, China – and the so-called developed West, the conversations invariably focus on the state of their comparative economies. With regards to the size of the Russian economy, negative comparisons are always made with the likes of Texas and Italy.

Professor Vladimir Golstein explains that the reasons why people are so quick to jump on Russia in this way stems from old world thinking. This kind of thinking underplays the country’s potential to utilize the huge natural and human resources it has at its disposal as well as its historical ability for rapid transformation, both militarily and technologically.

Golstein says that the metrics used to dismiss Russia are predicated on outdated statistical analysis of corrupt and inefficient production and planning methods during the brief period of the former Soviet Union’s collapse. It’s a snapshot analysis that has no bearing on the situation as it currently exists in modern day Russia.

The result of the Wests misrepresentation of the outmoded data has been to seriously undervalue a country that has come an enormously long way over the last two and a half decades. Moreover, the hubris used to value in this way has actually created a complacency in the West, whereas the Russian bear is actually moving quicker and more efficiently than many analysts give it credit for.

Golstein argues that the example of Western sanctions used against Russia has not only strengthened the country’s internal capacity to be more productively efficient, but has also made the country more cohesive:

“Now the people feel an external pressure, they are more friendly and more open to each other. They have been more willing to cooperate and they are inventing things and doing things. In the cities, there are many young people opening bars, cafes and little businesses. The only thing Russia needs is probably some Western know-how and definitely some capitals for investment”, says Golstein.

In this sense, it could be argued that Western sanctions against Russia have been counterproductive. This is certainly the view of Golstein:

“I think sanctions are very good for Russia. The more sanctions there are the better”, he says.

The Wests hubris against Russia stems largely from it’s misplaced sense of ‘End of History‘ triumphalism following the collapse of the Soviet Union. This was a time when we were told that capitalism reigned supreme. Many of the market excesses associated with neoliberalism emerged in the wake of fall of the Berlin Wall.

The failure of Western liberal democracy to deliver on its promises to the Russia people has brought the realization home to many inside Russia that the West is not a panacea. Golstein says that his countrymen and women understand that rampant neoliberal capitalism is not the solution, precisely because they see on the world stage how China is actually gaining against the West.

“I think the infatuation with the West is definitely gone. Most Russian’s realize that the West is not necessarily a friend and that it treats us condescendingly. The West used to be the only play in town and that’s why sanctions could have worked. But not anymore. And that’s just one thing which the West can’t still come to terms with,” says Golstein.

One of the main reasons that Russia mistrusts the West is because of its unipolar thinking in response to dealing with ecological threats in a finite planet that demand collaborative responses. Much of this thinking originates from the entrenched mentalities and Manichean worldviews of the baby boomer generation of Western leaders.

President Joe Biden is an example of somebody who hasn’t been able to move away from that old world mentality and dogmatic way of thinking.

“There is an American saying, ‘If it ain’t broke, don’t fix it.’ So from the perspective of the wealthy establishment classes, it’s not broken. They can pat themselves on the back saying, we won the Cold War. We’re doing so well. The whole world listens to us. If you live comfortably, you don’t want to change. In philosophy, there is a very famous Hegel discussion of the master-slave dialectic where he says that a slave who has to fight and liberate himself longs to think quickly and acquire skills so that eventually he might become a master. Well, a master is just too lazy to change his ways.”

Unfortunately, the mass of the world’s population does not have the luxury of putting up, indefinitely, with the idle complacency and empty words of presidents. The reality is that it’s only a handful of elites connected to the military-industrial complex who actually benefit from the geopolitical standoffs between the major global powers.

Golstein posits that solutions require the need to learn from each other:

“We have a lot to learn from a country like China, for example. But we also have to learn how to take care of forgotten individuals and not to just think of the numbers. Each society has plenty to offer as long as we don’t try to shove it down others throats,” says Golstein.

In the high-tech environment of the global village, Golstein says it’s important that technology is used by societies in a way that serves humanity as opposed to being in the service of elite power.

As a filmmaker who has studied the events that followed the 1991 collapse of the Soviet Union, Andrei Nekrasov questions the Western narrative on Russia:

“For a lot of people,” says Nekrasov, “the word democracy was just a slogan in name and ideological beacon that had nothing to do with power of the people.”

The filmmaker is supported in this assertion by reference to the fact that Boris Yeltsin at the time was not elected as president of what was this new capitalist Russia, but rather, as president of the Soviet Union Republic. But even then, as Nekrasov points out, his popularity rating in 1996 only stood at between two and six per cent and yet he still managed to win an election.

“So that couldn’t be democratic. Even liberals admit there was manipulation and it wasn’t a free and fair election,” says Nekrasov.

In truth, the word ‘democracy’ was used to ‘liberate’ new markets for the benefit of Western investors. Yeltsin’s corrupt entourage helped facilitate neoliberal ‘shock therapy’ in Russia practically overnight. The lie repeatedly told to the public was the claim that there was no alternative to the neoliberal medicine as the cure for all the ills of Russian society. This was presented to the Russian people under the guise of ‘progress’.

“But the real narrative,” says Nekrasov, “was a sort of rubber baron capitalism, the completely unfair and sometimes financially criminal privatization.”

“The 1991 revolution, as far as I’m concerned, was technically a failure. So then one shouldn’t be surprised that there would be a reaction, a counter revolution, in respect of that Russian anti-communist revolution.”

Nekrasov says that this counter-revolutionary upsurge was manifested, not only in the logical historical reaction of the Russian people, but personally in Yeltsin’s successor, Vladimir Putin. When Putin came to power he was faced with a host of problems to deal with, the defeat in Chechnya among them. Nekrasov contends that Putin started to try to solve these problems one by one to enable the Russian people to take control of their country. 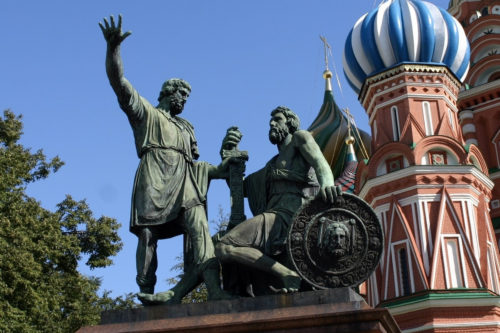 A Cooperative Capitalism: The Russian Idea

The filmmaker says that Putin’s main problem was how to reverse the tremendous damage caused to the country by a clique of ultra-capitalist oligarchs who had sold Russian assets and merged operations to the West. The prevailing Western narrative is that Putin is an enemy of the Russian people.

It is a narrative that Nekrasov rejects outright:

“Putin himself and the support he had from the Russian people were a reaction to the neoliberal ’90s. So economically he was trying to change Russia from the inside. But also, geopolitically, and maybe most importantly, he would have none of Yeltsin’s compliance with Western domination,” says Nekrasov.

The truth is, Putin’s real enemies have never been ordinary Russians or Westerners, but the neoliberal fundamentalists and their apologists who want to see Russia attacked and undermined for ideological reasons.