All this geopolitical hot air was always going to be about gas.

And predicting that, meant that before all the horse trading and brinkmanship began, independent energy experts, Irina Slav and Ben Aris had cut through all the noise.

Host, Ross Ashcroft, caught up with them to discuss the fundamental problems Europe and the UK now face to quite literally keep the lights on.

The public are constantly reminded by press and mainstream media commentators that there is an energy crisis in Europe. When the average UK punter on the street look at their quarterly bills they see that prices have hit the roof. So what best describes Europe’s energy crisis and what does it mean to the average member of the public?

Irina Slav says that the crisis began to emerge last autumn when people started preparing for the winter. This is the time of the year when demand for energy, caused by high heating demand, hits a peak.

Slav argues that the crisis in Europe can be explained by a lack of natural gas in storage and a comparatively reduced abundance of wind power generation to power Europe’s turbines. Also, scarcity, an insufficient supply of gas and the actions of speculators mainly explain the huge spike in prices.

Another issue that is causing great consternation to some of Russia’s adversaries is their Nord Stream pipeline project. The little known or discussed, Nord Stream 1, which has an annual capacity of 55 billion cubic metres, has been in operation for many years and already supplies around a third of Russian gas to Europe.

The main issue of contention is Nord Stream 2 which is coming into Europe in order to meet anticipated extra demand. Slav says that Gazprom, which has partnered with big European companies for Nord Stream 2, is doubling the capacity of this pipeline with the view to securing energy supplies and to capture this additional demand. Germany is predicted to be the biggest beneficiary.

Nord Stream 2 is competing with the United States which is planning to ship its Liquefied Natural Gas (LNG) exports to Europe. The American’s don’t want the European’s to have cheap gas from Russia, and see a massive commercial opportunity to be able to sell their LNG to the European market.

The question that arises, is why would any European government be interested in buying gas shipped across the Atlantic rather than buying it cheaper through a pipeline from Russia?

Slav says that the EU have also shown a renewed interest in the diversification of gas supplies in the context of the growing public demand for electricity. Australia has been widely mooted as part of this diversification process.

But according to an article in the Financial Times, the Australian gas producer, Santos Energy, admit they won’t be able to fill any gap left in European LNG supplies if Russia turns off the tap because all that gas is already earmarked for contracts in Asia.

Slav suggests that the decision not to buy from Russia is more ideological than it is commercially pragmatic. Certainly, much of the recent rhetoric and media information war that’s gone on in Ukraine has been to drum up support for America putting more sanctions on Russia when it comes to energy.

Slav makes the point that the US has been opposed to Nord Stream 2 from the very beginning.

“They have been looking for ways to sanction it, to stop it. Obviously, this pipeline is a big problem for the United States”, says Slav.

Nevertheless, buoyed by America’s current position of being the world’s biggest LNG exporter due to a combination of the European energy crisis and the lack of reliable renewable energy supplies, and the fact that European utilities are beginning to reconsider their unwillingness to sign long-term supply contracts with U.S. producers, America feels confident that it can push into the European market.

However, Slav adds an important caveat:

“Although prices are high enough for American producers to start shipping gas to Europe which might undermine Nord Stream 2, it won’t be a make or break situation because there are not enough LNG terminals in Europe. American LNG cannot fully replace Russian gas,” says Slav.

Ultimately, the American arguments about impinging on Europe’s energy market whilst also in some way giving Russia a bloody nose, is more about hubris than it is about sound business or geopolitical reasoning.

Ben Aris shares this view. The analyst remarks that although there is plenty of energy in the world, it’s the politics interfering with it that’s the problem. Inevitably, the consumer ends up paying the price for all the hubris by way of fuel price hikes.

Aris says that the most recent increases have been caused by what he describes as a V-shaped market centred on a combination of extreme low and excess levels of consumer demand. In addition, Europe reverted to the Spot Market during periods of high demand/low supply which the long-term Nord Stream 2 contracts are designed to prevent.

“There’s a kind of a standoff and it’s the consumers that pay for this politics. Europe needs the gas, but it’s unwilling to sign these deals. The bottom line is that 30 percent of Germany’s and Europe’s gas comes from Russia. Nord Stream 2 means that Russia can cut Ukraine off. You get a whole bunch of politics involved because Ukraine badly needs the $2 billion a year it makes from the transit business”, says Aris.

The analyst says there is a great deal of the political noise emanating from Ukraine is about Nord Stream 2 and that it’s one of the most divisive issues that exists between the United States and Europe.

“One of the other factors you have to include in this extremely complicated story”, says Aris, “is the fact that the US used to be a net importer of gas, but then they discovered shale and so now it’s the biggest exporter of LNG to Europe. But it’s actually more expensive than piped gas. And given that US gas is fracked, there’s a huge environmental cost their as well. And so someone like Germany are saying they would rather have pipeline gas because it’s cheaper, safer and cleaner.”

What is clear, is that the energy crisis vis a vis Nord Stream 2 and the geopolitical and economic power struggle between the contending powers in Ukraine cannot be disentangled from one another. Aris says, for example, that there is a huge motivation for the Germans to get Nord Stream 2 turned on because of the cheaper energy price implications for the consumer while it would also improve European energy security. 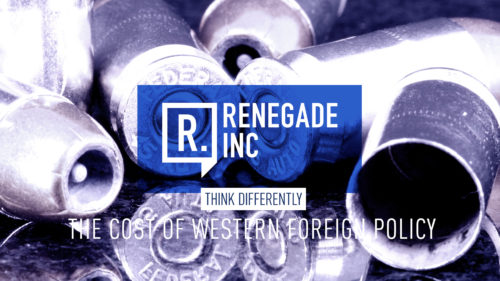 But, of course, the war in Ukraine is an impediment to this eventuality. The key problem is NATO expansion.

“Putin wants a security deal now and is digging his heals in. I should make this point too that Putin offered a security deal in 2008. It was the first thing he did when that term started and it was rejected out of hand. The Russians had a very detailed plan. Putin has been talking about NATO expansion since 2003. So what they’ve done this time is built up such a credible threat of violence that they forced the issue onto the negotiating table.”

Indeed, Putin’s approach appears to have been the catalyst for Macron’s recent involvement in the process where the emphasis has switched to implementing the Minsk 2 peace accords that would bring fighting in the Donbas to an end.

“The thing with Minsk 2, is that it was a deal done by Merkel. She wants it. Macron wants it. They don’t want it in Kiev because they would effectively lose control of Donbas. The irony is if Minsk 2 went through, it would end the war in the east. Ukraine would be at peace. Russia would have its guarantee of no NATO. It would be happy and it would stop interfering. And then Ukraine would boom,” says Aris.