Over millennia, and certainly since Field of Dreams, the idea that build it and they will come has prevailed. After Kevin Costner’s massive success, it seems that politicians have taken his gung ho approach to construction literally.

Olympic stadiums, often bankrupt host nations and the skyscraper index, tells us that the world’s tallest buildings are completed on the eve of a significant economic downturn. So why haven’t we ever made the link between senseless construction and politics?

Host Ross Ashcroft went to Kakanomics, the leading economics festival in Norway, to talk with the anthropologist David Graeber about Batsh*t Construction, a trend that has gripped the world.

For many, the built environment of the modern city has come to symbolize unparalleled technological advances and economic prosperity. For others, it is indicative of the internal contradictions associated with capitalism. Whether it’s mass consumption advertisers, pipeline engineers or petroleum geologists, workers have an interest in habitable environments. However, they are also caught up in an inherent contradiction: their employment requires them to destroy the conditions of life in order to make a living.

Construction is another case in point. It was while working with Extinction Rebellion that the anthropologist, David Graeber, discovered huge amounts of waste and carbon were coming out of the construction industry at much high levels compared to domestic waste.

“In London, it’s actually cheaper to build a new building than to rehab an old one. You get a tax break if you rip down a building and build something else. If you just rehab the older one, you don’t”, says Graeber.

The anthropologist contends that it’s the right-wing populism of Donald Trump and his election victory over Hillary Clinton that has come to not only symbolize a growing emphasis on real estate as the catalyst for growth and its separation from finance, but also explains how political parties, across the spectrum, are funded. It was the Faustian pact the Democratic Party in the U.S made with real estate speculators who increased the availability of cheap credit, that eventually resulted in the crash of 2008. 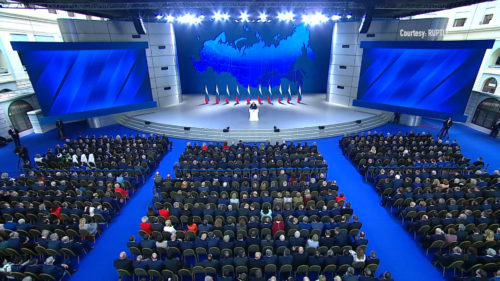 While Hillary Clinton was seen to be a personification of this failed neoliberal experiment, Trump is widely regarded as a people’s champion against it. Uniting both employees and employers against finance capital in favour of a corporatist politics, Trump positioned himself as a pro-blue collar and construction guy against rival corporate finance and pro-global elite candidate, Clinton. This factional pattern has been replicated throughout Europe. Characteristic of Centrism, the politics of the likes of Merkel and Macron are closely aligned to the financial interests of the one per cent who have garnered mainstay support from the professional managerial classes.

Given the fact that the working class play a major role in the construction industry means that the locus of the proletariat has shifted from the factory to actually building cities. This, in turn, has altered the way that industry in cities is organized. Often undertaken through the auspices of the mafia, the form in which this organizing takes reflects a dichotomy between a working class elite and a racialized, often immigrant, underclass – a pattern that tends to repeat itself.

The dichotomy provides a psychological basis for nativist and right-wing populist opinion of a kind that Trump has legitimized through state forms of sponsorship predicated on cheap credit. Used to stimulate growth, this corrupt crony-capitalist model has been copied throughout the world by other right-wing populists, all of whom pump out cheap credit in order to build bat*hit crazy construction projects. These are driven, not by need, but by the financial imperatives of absentee speculators. London leads the way in this form of construction.

Successive neoliberal governments’ have encouraged these projects in order to stimulate growth.

“I think it’s always been the case that empires and fascists love building and construction. It’s a way to take financial abstraction and make it seem real. We live in a world where numbers define our reality”, says Graeber.

The Grenfell tragedy is a testament to the fact that the ongoing adherence to this insane economic paradigm not only creates terrible economics that undermines any sense of community cohesion and our ability to interact in cities, but also affects our health, well being and safety.

Grenfell is arguably the epitome of  Batsh*t Construction and neoliberal finance where speculation on vastly inflated real estate has taken priority over the remedying of poverty and providing people with safe, affordable homes based on need. “What’s been going on in London for the last 20 years has been the exiling of the working class from anywhere near where rich people are”, says Graeber. Economically dislocated and socially desolate working class communities alienated from the plush environments of the rich emblematic of ‘progress’, is a dichotomy that cannot be reconciled by ‘market forces’. Rather, Graeber argues that the rich appear to have discovered a new market for the English working class of their own in the form of a ‘defeat and humiliation’ export product.

The never ending cycle of corruption

The anthropologist contends that the existing funding regime which perpetuates this state of affairs is:

“basically a system of institutionalized bribery. The 1 percent are both the people who have got all of the profits from economic growth, basically since 2008, and also the people that make all the campaign contributions. So essentially, they’re people who can turn their power into wealth and their wealth back into power. It’s just a cycle. You need to break out of that cycle somehow, and that requires political change. People have set up a way of turning the political system into a cash machine”, says Graeber.

Fellow anthropologist, professor David Harvey, agrees: “The U.S is a democracy of money power, not people power. Since the 1970s, the Supreme Court have legalized corruption of the political process by money power”, says Harvey.